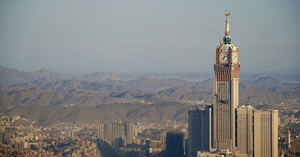 Brian Spaen for GreenMatters:  Saudi Arabia, one of the world’s biggest oil exporters, is planning to boost their economy with a fully renewable city. Located between Jordan and Egypt, this new metropolis will be over 33 times the size of New York City. The goal is to limit the focus on revenue from oil exports and to bring in companies that will help grow the new city.

Saudi Crown Prince Mohammed bin Salman announced the new project this week, called NEOM, at the Future Investment Initiative Conference in Riyadh. Estimated costs to construct the metropolis are at $500 billion. NEOM is expected to measure at 10,230 square miles, which is a significant amount of land to make fully renewable.

The country is hoping to fund $300 billion of the project while selling five percent Saudi Aramco, which is a petroleum and natural gas giant in Dhahran, Saudi Arabia. Funding would come from sources like the Public Investment Fund and investors from Japan’s SoftBank. Ultimately, there will be nine sectors of the city that will boost Saudi Arabia’s overall economy, including energy and water, mobility, and biotech.

Visions include the sun powering large landscapes of solar panels, and the electrical grid will also be powered by wind turbines. All of this is, along with “whole new kinds of energy the world has yet to hear of,” is expected to power the gigantic metropolis. Since there’s a lot of real estate to traverse, they’re planning to add green and automated transport options.  Full Article: