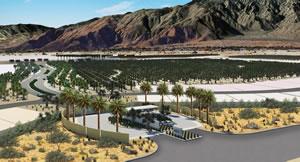 Marilyn Kalfus for the OC Register:  The olive – that familiar little fruit lolling around in your martini – is about to make a splash in the Southern California real estate market.

The developer of a new residential enclave in Palm Springs is swapping out an 18-hole golf course for dozens of acres of olive groves.

The 300-acre sustainable community, named Miralon, is planned as one of the nation’s largest agricultural neighborhoods, or “agri-hoods,” where new homes crop up around community farms.

Agri-hoods are a hot trend. There are about 150 so-called farm-to-fork neighborhoods around the U.S., says Ed McMahon, a senior resident fellow at the Urban Land Institute. They’re as close as Rancho Mission Viejo in Orange County and The Cannery in Davis near Sacramento, and as far-flung as Serenbe in Chattahoochee Hills, Ga.; Willowsford in the rolling hills of Loudoun County, Va., and Kukui’ula in Hawaii, where Kaua’i residents can harvest guava, papaya and pineapples.

“It’s a concept whose time has come,” said Paul Habibi, professor of real estate at UCLA’s Anderson School of Management. “We’re increasingly looking to sustainability as an important objective in real estate development.”

The Olive Oil Times, which touts itself as “the world’s No. 1 source for the latest olive oil news,” recently devoted a spread to the planned olive oasis. “Golf courses require a lot of water to stay lush and playable,” the story noted.

Olives groves, on the other hand, aren’t that expensive or demanding. The groves flourish in hot environs and can withstand a drought, said Brad Shuckhart, who heads the California division of Freehold Communities, Miralon’s developer.  Full Article: