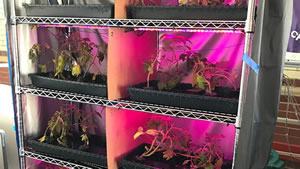 David Szondy for New Atlas:  Vertical farming has been suggested as a way to bring fresher food to urban dwellers while reducing the carbon footprint needed to grow and transport them, but a group of Carnegie Mellon University (CMU) students sees it as a way to improve basic nutrition in impoverished areas. Using simple equipment and LED lights, the students are developing an inexpensive way to allow almost anyone to grow fresh, nourishing food for their families and community.

There are many kinds of poverty, but one of the most intractable is food poverty. This is because the concept is one of access as much as affordability. In other words, some people may suffer from food poverty because they don't have enough money to buy enough nutritious food, but others, even in very wealthy countries, may live in areas known as nutritional islands. That is, areas where anything beyond poor quality, prepackaged foods is rare and expensive, which results in malnutrition and generally poor health.

To address this, a group of students from the CMU chapter of Engineers Without Borders (EWB), led by Engineering and Public Policy (EPP)/Chemical Engineering (ChemE) undergraduate student Jack Ronayne, has turned to vertical farming as a way for people to grow food in their own homes.

"Something we identified was this idea of nutritional islands in urban communities: places with limited access to fresh food either by distance, freshness, or cost," says Kelvin Gregory, a professor in civil and environmental engineering and faculty advisor for EWB."We asked ourselves: could you simply grow fresh fruits and vegetables in your house? Obviously the footprint needs to be small, so you have to go vertical. And you'll need to use artificial lighting. These are the problems we decided to solve for."  Full Article: