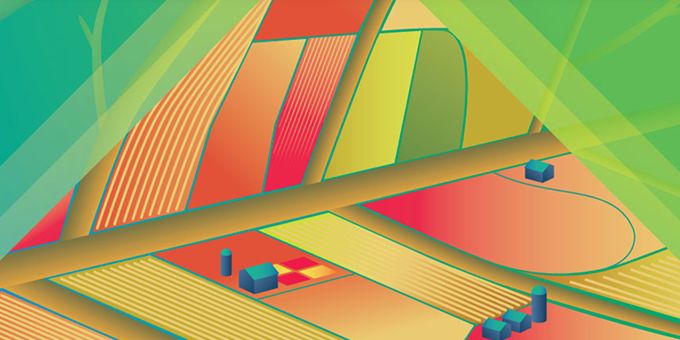 Whatever your stance on the causes of climate change, the data related to the results are stark. The United Nations estimates that the world’s farmers will have to produce 70 percent more food using just five percent more land by 2050. That’s a difficult equation to compute.

In California’s Central Valley—the seven-million-acre region where more than half of the fruits, vegetables and nuts produced in the US are grown—long-time farmers are proud of their innovation and accustomed to tough equations. After all, since the 1930s, they have managed to consistently harvest almost 10 percent of the country’s agricultural output—by value—on less than one percent of the country’s farmland. They’ve succeeded by mastering long-range irrigation and groundwater extraction. Every year, more than 250 different crops are grown in the Central Valley, with an estimated value of $17 billion.

As skilled as the agrarian visionaries of the Central Valley are, they had run out of tricks when a string of drought years in the first two decades of the century threatened to decimate America’s market garden. Between 2012 and 2016 alone, the estimated groundwater volume fell by ten cubic miles.

The fact that the western edge of the valley is just 100 miles from the heart of another valley, where silicon is valued more highly than celery, has turned out to be quite fortuitous. Contemporary infrared scanning technology is providing the farmers of the Central Valley, and others much farther afield, with a new technique for boosting the chances for good harvests, using water more efficiently, and moving toward what is being termed precision farming. It required a new type of imaging.

A trick of the light

Developed for military use, during the last decade, infrared scanning has become a widespread technology for applications such as predicting water stress in crops and fruit yield, planning irrigation scheduling, detecting disease and pathogens in plants, and evaluating fruit maturation. Farther down the food chain, thermal imaging is used to detect the ripeness of fruits and vegetables at distribution points and in retail outlets, and for detecting foreign bodies in foods.

The technology uses the fundamental science of infrared radiation, which Sir William Herschel, a German-born astronomer, discovered in 1800. Working in England, two decades after discovering the presence of the planet Uranus, Herschel observed that sunlight produced significantly more heat when passed through a red filter. Passing the sunlight through a prism and measuring the temperatures produced by various colors, he surmised that the highest temperatures existed beyond the visible light rays, in what he termed “calorific rays.”

In technical terms, what Herschel concluded was that infrared radiation is emitted or absorbed by molecules when they change their rotational-vibrational movements. It excites vibrational modes in a molecule through a change in the dipole moment, making it a useful frequency range for studying various heat-producing targets. Infrared light is electromagnetic radiation with wavelengths longer than those of visible light, extending from the nominal red edge of the visible spectrum at 700 nanometers (0.7 µm) to 1 millimeter (1000 µm).

As outlined in a 2005 article produced for the Canadian Society for Engineering in Agricultural, Food and Biological Systems (CSAE): “Many characteristics of infrared radiation are similar to visible light. For instance, infrared radiation can be focused, refracted, reflected and transmitted.”

“In thermal remote sensing, the invisible radiation patterns of objects are converted into visible images… called thermograms or thermal images,” noted a 2014 research paper titled “Applications of Thermal Imaging in Agriculture—A Review. Advances in Remote Sensing” by R. Ishimwe, K. Abutaleb and F. Ahmed. “Thermal properties of plant leaves are affected by a complex heterogeneous internal structure that contains a certain amount of water per unit area. For that reason, it is possible to have research on individual plants with thermal remote sensing because of the versatility, accuracy and high resolution of the infrared thermography.”

The 2005 CSAE paper concluded that thermal imaging “has potential to be used in many pre-harvest and post-harvest operations of agriculture,” but noted that the application opportunities were still in the experimental stage.

Just 14 years later, as reported in the New York Times profile of farming in the Central Valley, one-third of the area’s “specialty” crops—things like nuts, grapes, broccoli, artichokes and cucumbers—were being regularly surveilled using thermal imaging.

Among the applications are nursery monitoring, irrigation scheduling, soil salinity detection, disease and pathogen detection, yield estimation, maturity evaluation and bruise detection. While efficiencies are an important result—with farmers using imaging to determine where to focus the efforts of their field workers and reducing the amount of direct inspection of crop rows and individual plants—corrective action is even more critical to combat drought conditions and other threats to plant health. Using imaging can allow farmers to understand crop conditions and fix problems, such as nutrient deficiency or moisture stress, before they create long-term loss. Data collected from imagery can also give them the insight they require to make decisions related to investments. For example, imaging can provide estimated crop yields, which can help determine whether investments in extra irrigation or fertilizers are warranted.

In that sense, the technology is playing a major role in transforming farming from being simply sustainable—using methods like those developed over decades in places like the Central Valley—to the precise application of techniques based on data that rely on things like GPS tracking, sensors, soil sampling, satellite mapping and the use of drones.

According to CropLife Canada—part of the CropLife International consortium, a global federation with members across 91 countries—precision farming has the potential to transform the outcome of agriculture during the coming century.

In a white paper on the subject, CropLife Canada states: “Collecting digital farm data that can be ingested and analyzed by farm management software (gives) farmers a much more detailed picture of a farm’s health…. This increases farming efficiency so that pesticides and other inputs are applied only where they are needed.”

With humanity’s demands on our farms increasing, the technology to drive precision farming is changing, too.

On the digital imagery front, the evolution includes the move to short-wave infrared (SWIR) imaging, which is defined as using a wavelength range of 1.4–3 µm, somewhat shorter than either mid-wave infrared (MWIR) or long-wave infrared (LWIR) and just above the near-infrared range. Shorter SWIR wavelengths behave similarly to photons in the visible range. While the spectral content of targets in SWIR is different, the images produced are more visual in their characteristics and less like the lower resolution thermal behavior of the MWIR and LWIR light bands. Compared to MWIR and LWIR, SWIR’s shorter wavelengths enable images with higher resolution and stronger contrast, both of which are important criteria for inspection and sorting.

Because water is highly light-absorbent in the SWIR wavelength, it appears almost black in images of objects illuminated using SWIR cameras. As a result, applying an appropriate filter or light source can help make moisture content highly evident in bruised fruit, well-irrigated crops, or bulk grains. Thanks to this property, scientists can precisely follow water absorption from the roots into the leaves. Conversely, evaporation and desiccation can also be seen. A large number of applications that are difficult or impossible to perform using visible light are possible using SWIR. When imaging in SWIR, water vapor, fog, and certain materials such as silicon are transparent. Additionally, colors that appear almost identical in the visible spectrum may be easily differentiated using SWIR.

Perhaps best of all, for the future of precision agriculture and the ability of farmers to utilize this promising technology, SWIR offers savings over other types of imaging, too. Since SWIR wavelengths transmit through glass, the lenses and other optical components, like filters, designed for SWIR can be manufactured using the same techniques used for visible components, decreasing manufacturing costs. Paired with a mobile device app, the technology can provide handheld views in a wide range of settings for about $500. In the Central Valley, farmers report that SWIR imaging costs them up to $30/acre, including the cost of delivery mechanisms like drones or aircraft.

While a price tag of $500 may still make SWIR impractical for personal use today, it’s not difficult to imagine future shoppers parsing data on their smartphones while cruising the produce aisles of their neighborhood store. And, thanks to technology discovered more than two centuries ago, there should still be apples, pears and peaches there to scan.