INFARM STARTS OPERATING ONE OF EUROPE'S LARGEST VERTICAL FARMING FACILITIES IN BEDFORD. POTENTIAL TO SERVE 90% OF THE UK POPULATION 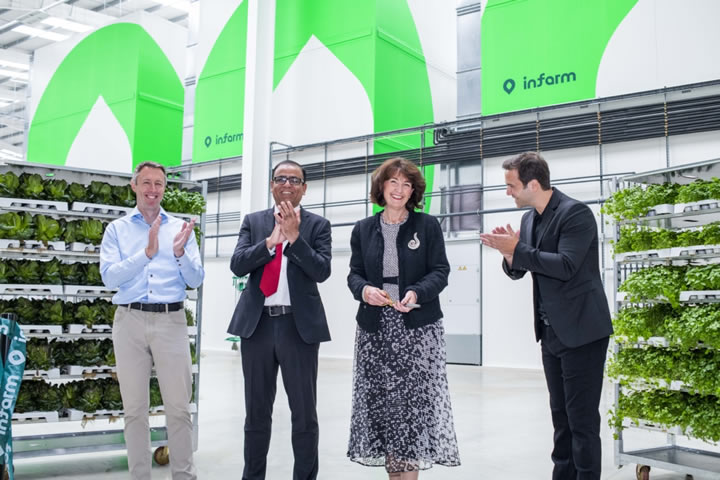 Infarm, the rapidly growing vertical farming company, today officially opened one of the largest urban farms in Europe, in Bedford, UK. This is Infarm’s first high-capacity Growing Centre in the UK, the facility measures 10,000 sqm and can feature up to 40 Infarm cloud-connected farming units, each standing 10 metres high. Each unit can grow more than 500,000 plants per year – the equivalent of a football field worth of crops.

Today’s opening celebrations at the facility included addresses from Jo Churchill, MP, Minister of Agri Innovation and Climate Adaption at the Department of Food and Rural Affairs, and Mohammad Yasin, Member of Parliament for Bedford, both recognising the importance of ensuring a domestic food production that goes with the security of offering UK’s population fresh produce whilst caring for the environment by the means of innovative and outstanding technology.

Minister for Agri-Innovation and Climate Adaptation Jo Churchill said: “Infarm is capable of producing up to 20 million plants across the UK every year, and its new facility in Bedford will be a fantastic boost for the local economy. We want to be world leaders when it comes to innovation; our Food Strategy is committed to boost food production in sectors including horticulture, and we are spending £270 million on unlocking innovation in agriculture. With each unit having the potential to grow over 500,000 plants per year, Infarm is a great example of innovation being used to enhance productivity – and I am delighted to support the opening of this facility today.”

Mohammad Yasin, MP for Bedford said: “The UK is overly dependent on food imports leaving us dangerously exposed to food insecurity and soaring food prices so I’m really excited that Bedford is now home to one of Europe’s largest vertical farming facilities at the forefront of new ways to grow more food domestically. The prospect of growing food with a low carbon footprint, without the need for chemical pesticides, using the latest in green technologies is very promising and it’s great that Bedford can play its part in bringing food closer to the people on a scale that might one day feed the nation.”

Erez Galonska, CEO and co-founder of Infarm said, “The Infarm Growing Centre in Bedford enables us to increase the amount of fresh produce grown locally in the UK significantly. Fully equipped we will be able to deliver up to 20 million locally and freshly produced plants to our UK partners every year. We are grateful that our efforts to contribute to safe and sustainable food production in the UK are acknowledged and supported by Jo Churchill and Mohammad Yasin who we are honoured to welcome here in Bedford. The opening of this UK facility is aligned with our goal to change the food system for the better by improving the safety, quality and environmental footprint of our food.”

Each Infarm Growing Centre uses 95% less water and land than traditional agricultural methods and saves thousands of food miles. The location of the new facility means that fully equipped, it can serve 90% of the country’s population within a four-hour drive. Uniquely, the Growing Centre in Bedford will implement rainwater harvesting. The further estimated 2.5 million litres of water captured by this technique per year will be used for conditioning the plants.

In the UK, Infarm’s herbs and leafy greens are also offered at Whole Foods Market, Selfridges, Marks & Spencer, Fortnum & Mason, Budgens, as well as at the online retailer Getir. In addition, Infarm’s fresh produce can be tasted at restaurants in London, including Michelin Star locations, Pied a Terre, Sabor and Hide.

The new Growing Centre in Bedford will be part of Infarm’s expanding global network of vertical farms. By the end of 2030, Infarm plans to expand to 20 countries. Every vertical farm is connected to a central farming brain which gathers data constantly to improve plant yield, taste, and nutritional value, while further reducing the use of natural resources.

About Infarm
Founded in 2013, Infarm is the world’s fastest-growing vertical farming company. In partnership with more than 30 of the world’s top retail chains in 10 countries in North America, Asia, and Europe, Infarm’s fresh produce is available in more than 1,850 stores worldwide. By 2030 Infarm plans to expand to 20 countries on those three continents and to the Middle East. The company’s product catalogue consists of a variety of more than 75 plants such as herbs, leafy greens, salads, microgreens, and mushrooms, and will soon include strawberries, peppers, cherry tomatoes, and peas. The company’s modular farming systems are highly efficient, capable of growing more than 500,000 plants annually on just 40m2 of floor space. In addition to using 95% less land, Infarm requires 95% less water than traditional farming methods and uses no chemical pesticides. So far, Infarm has saved more than 130 million litres of water, more than 180,000m2 of land, and nearly 1.6 million food miles (about 3 million km) with its production methods. Infarm has committed to setting a science-based net-zero carbon target through The Science Based Targets initiative. Infarm’s operating entities are embedded in a holding company, infarm Indoor Urban Farming B.V, which is registered in The Netherlands. For more information, please visit www.infarm.com.