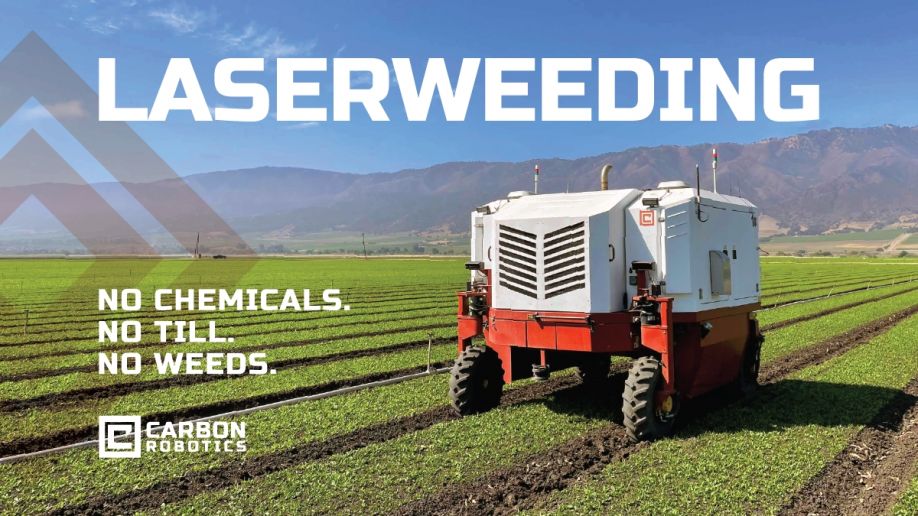 Carbon Robotics, an agriculture robotics company, today announced it secured $27 million in Series B financing from Anthos Capital, Ignition Partners, Fuse Venture Capital, Voyager Capital, Bolt and Liquid2 Ventures to accelerate the company's growth. The funding will be used to scale production of the company’s products, grow its engineering team, establish regional sales and support for customers across the U.S. and invest in the innovation of new products and technology. This latest round of financing brings the company's overall funding to $36 million.

“This investment further validates our mission to create tools that utilize technology to address farmers’ toughest problems,” said Paul Mikesell, CEO and founder of Carbon Robotics. “Weeding is one of the biggest challenges farmers face, especially with the rise of herbicide-resistant weeds and increasing interest in organic and regenerative methods. This round of investment will enable us to scale our operations to meet the increasing demand for this technology. Additionally, this funding will allow our team to continue to innovate new products and identify revolutionary ways to apply technology to agriculture.”

In April, Carbon Robotics revealed its next-generation Autonomous Weeder, an autonomous robot that utilizes high-power lasers to eradicate weeds through thermal energy, without disturbing the soil. The robot allows farmers to use less herbicides and reduce labor to remove unwanted plants while improving the reliability and predictability of costs, crop yield and more.

With 263 herbicide-resistant species across 71 countries, the company has seen a high demand for its products, securing a number of marquee growers and bookings that exceed $20 million. Farms that have ordered laser-weeding units include Grimmway Farms, Carzalia Valley Produce, Mercer Ranches, Taylor Farms, Triangle Farms, Terranova Ranch, Bowles Farming Co, Braga Ranch, Duncan Family Farms and Amigo Farms. Carbon Robotics has sold out of its 2021 and 2022 models and has begun accepting orders for 2023.

“Carbon Robotics is uniquely positioned to address critical issues affecting farmers, including the rise of superweeds and the decrease of available labor,” said Erik Benson, managing director of Voyager Capital. “The company is making advanced technologies accessible to farmers, supporting their business operations by improving efficiencies and reliability as well as offering a sustainable method to support the management of their land. Carbon Robotics is fundamentally changing how farmers weed fields and has the potential to be this millennium’s Deere & Company.”

As a part of the financing, Carbon Robotics welcomed Eric Scollard as Strategic Sales Advisor to support the company’s aggressive growth trajectory. In his role, Scollard will focus on developing strategic expansion initiatives that will enable Carbon Robotics to effectively scale distribution of the Autonomous Weeders and future products. Scollard will also support the development of the sales and regional support teams. During his previous executive roles at ExtraHop, Isilon and Qumulo, Scollard drove exponential growth in revenue while building world-class sales organizations.

“The already demanding task of weeding has only gotten harder for farmers to manage as more herbicide-resistant weeds develop and the cost of herbicides increases,” said Cameron Borumand, general partner at FUSE. “Carbon Robotics has built a game-changing solution to solve one of the biggest problems in agriculture. Farmers have been innovative and resourceful in addressing this problem so far, but they deserve the best technology to help them execute one of the most important jobs in the world—putting food on people’s tables.”

Carbon Robotics is pioneering the next revolution in agriculture through the deployment of innovative technology and hardware. Carbon Robotics’ first product, the Autonomous Weeder, is purpose built to tackle one of the industry’s biggest problems: weed control. By leveraging artificial intelligence and laser technology, Carbon Robotics’ revolutionary, high-precision approach improves crop yield, provides safer working conditions for farmers, reduces overall costs associated with modern farming, and creates sustainable paths to regenerative and organic produce. Carbon Robotics was founded in 2018 and is based in Seattle. For more information, visit: carbonrobotics.com.