This precision farm machine can shape the future of India's agriculture 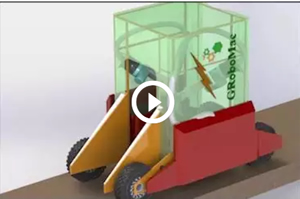 Pranbihanga Borpuzari for ET Online:  When Manohar Sambandam chose to turn entrepreneur at the age of 50, he had it all figured out. A techie in the semi-conductor industry for 25 years, he decided to turn a farmer and quit the corporate world in 2013.
"I had bought a piece of agricultural land in Tamil Nadu and tried different crops. Cotton was one of the cash crops which seemed ideal. It requires less water, a lot of sunlight and the prices are a lot better than crops like paddy," says Sambandam, 54.

Sambandam took the plunge and did all the 12.47 acres of his land with cotton. His labour bore fruit and Sambandam had a very good yield. However, to Sambandam's horror he now had a peculiar problem that he had not accounted for before. "Unfortunately cotton is a crop which is completely done by manual labour. Cotton picking is completely dependent on humans and the demand for people 'peaks' during the picking season," says Sambandam.
Demand not only increases the cost of the labour, but also brings in other unethical behavior such as child labour into practice. "Though I had a good yield it was not possible for me to harvest the cotton due to non-availability of the labour at the peak season. Finally, unseasonable rain destroyed the cotton in the field which was ready for picking," says Sambandam.   Full Article: