The Hydroponic, Robotic Future of Farming in Greenhouses 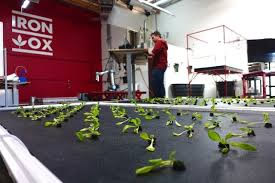 Matt Simon for Wired:  WHEN YOU THINK of automation, you probably think of the assembly line, a dramatic dance of robot arms with nary a human laborer in sight. But that’s child’s play. The grandest, most disruptive automation revolution has played out in agriculture. First with horses and plows, and eventually with burly combines—technologies that have made farming exponentially cheaper and more productive. Just consider that in 1790, farmers made up 90 percent of the US workforce. In 2012, it was 1.5 percent, yet America still eats.

Here in 2017, the automation revolution in agriculture is poised to take on a whole new life—thanks to robots. In a nondescript office park in Silicon Valley, a startup called Iron Ox is taking the first steps toward roboticizing greenhouse farming, which has so far stubbornly resisted automation. In the very near future, then, the salad on your table may come from the hand of a robot.

Unlike a lot of indoor farming operations, Iron Ox isn’t joining the booming movement of LED-powered grow houses. It’s still very much interested in harnessing the energy of the sun (free energy!). So it’s invading the greenhouse instead. “The problem up until today is that greenhouse production costs around twice as much to grow a head of lettuce as the outdoor farm,” says Brandon Alexander, CEO of Iron Ox. “And one reason is there's no there's no tractors or anything indoors.”  Full Article: