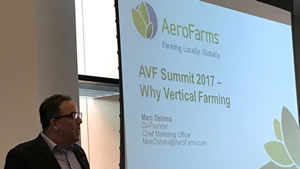 Richard Jones for Greenhouse Grower:  The University of the District of Columbia is the nation’s only urban land-grant university, so it was a particularly appropriate setting for the Association of Vertical Farming (AVF) to host the AVF Summit 2017 on September 22. The summit was a mix of education, advocacy, and policy discussion about urban agriculture — vertical farming in particular — targeted at finding ways to broaden its adoption in cities around the country and around the world.

You’ve probably heard quite a bit in recent months about vertical farming — systems for growing food in stacked layers in completely controlled environments, applying inputs such as light, water, and fertilizer in precise amounts. While there’s some use of these systems in greenhouse settings, in many cases, urban farmers are repurposing abandoned buildings or even shipping containers. Match the availability of these facilities in most large urban areas with big cities’ limited access to fresh, local produce and you can see why interest — and investment — are growing.

Around 100 people attended the summit, a mix of researchers, suppliers, government employees, and potential growers. The overriding interest of most seemed to be in the potential of vertical farming not just as a business opportunity, but also as technology that can help solve some of the most pressing problems of getting nutritious food to people in areas where there’s limited availability. Techniques such as hydroponics or aeroponics can produce crops with a fraction of the water and nutrient resources required in traditional outdoor production.

“Vertical farming will be one pillar to help tackle these problems,” said Christine Zimmerman-Loessi, Chairwoman of AVF.  Full Article: