Are vegetable flats the future? 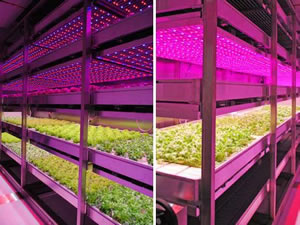 Fresh Plaza:  The most densely populated island in the world is Macau. In the Chinese state, 600,000 people are packed together on 30 km2, making the population density practically 20,000/km2. That figure is much lower in the Netherlands. On average, 500 people live on a square kilometre here. In Dronten, in the centre of the Noordoostpolder, that number is even lower. Inhabitants there have to share their square with just 121 people. Yet the Staay Food Group chose to not build a 3,000 m2 greenhouse, but a much more expensive vertical farm of 900 m2. What inspired them to do that? And is vertical farming becoming more popular globally?
The world population is increasing, we’re all moving to cities, and we attach more and more value to high-quality food, grown safely. The trends cannot be ignored and all indicate the same: a growing demand for vegetables, grown at or near to the place of consumption. But how should that be realised? After all, space in cities is limited. Vertical cultivation systems are seen as the solution increasingly often. By working in a controlled environment and on multiple layers, an enormous amount of food can be produced on a small surface. A minimum amount of water and fertiliser is used. Moreover, the cultivation is clean, the chance of contamination is small, and little knowledge is necessary to run farms like these: computers calculate and adjust the cultivation. And, perhaps most importantly, there’s complete control over climate and light. The crops are grown without outside influences and contaminations, and the production area is sterile.  Full Article: