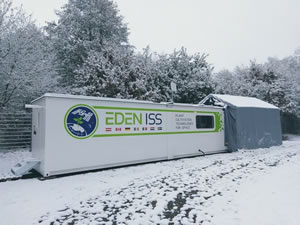 But engineers at the German Aerospace Center (GAC) will soon build a high-tech farm that will allow Antarcticans to harvest produce.

The farm will feature a year-round greenhouse that can grow food for researchers at the Neumayer III polar station on the Ekstrom Ice Shelf.

Called the Eden-ISS, the farm exists inside a climate-controlled shipping container. The greenhouse relies on  a technique called vertical farming, in which food grows on trays or hanging modules under LEDs instead of natural sunlight.

Before the Eden-ISS shipping container farm debuts in Antarctica, the GAC is testing growing fruits and vegetables at its headquarters in Bremen, Germany.  Take a look at the farm, which will come to Antarctica in October, below.