Urban agriculture is a growing trend across the country and around the world. In many cities, vertical hydroponic greenhouses and other urban agriculture facilities are making life greener, healthier, and all-around better for residents. 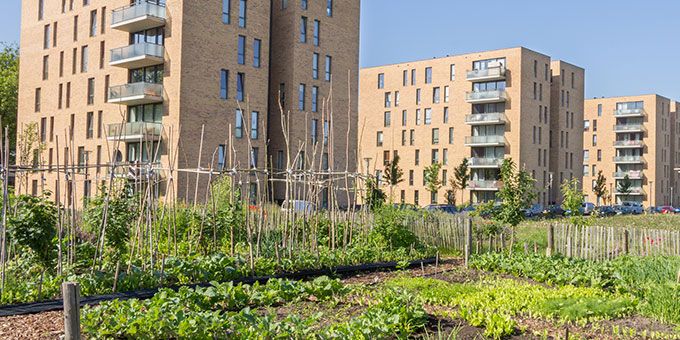 What Is Urban Agriculture?

Urban agriculture is exactly what it sounds like: farms within cities. Sometimes this may be as small as a few pots growing various plants in someone’s backyard. Other times it can be done on a commercial scale, such as with hydroponic vertical farms.

These vertical farms take traditional agriculture and turn it on end, planting crops stacked one on top of another rather than in long rows on the ground. This can be managed in shelving systems full of trays or in towers featuring plant pods. Either way, vertical farms can grow far more crops in a much smaller footprint, making them ideal for an urban setting.

One key way that urban agriculture is making a difference is by putting an end to food deserts wherever it’s practiced. Food deserts occur when a population doesn’t have appropriate access to fresh, healthy foods. Two commonly recognized forms of food deserts are:

In urban food deserts, residents typically survive on fast food and other convenience foods. As urban agriculture moves into the neighborhood, these same residents are given access to fresh produce like leafy greens and ripe tomatoes.

Even in areas where supermarkets are prevalent, fresh food is often not grown locally. Instead, fresh fruits and vegetables are grown hundreds or even thousands of miles away, then trucked, shipped, and flown into our communities.

There are several problems with this arrangement.

A movement toward local food is sweeping the nation, with more and more people choosing to consume foods from their immediate area. We’re seeing this in farmers markets and the choices available at major grocery chains. Urban agriculture is an excellent way for tightly-packed urban areas to take part in this movement.

In traditional agriculture, farm work is back-breaking, dangerous work that is almost never adequately compensated. It’s also seasonal, meaning workers must travel from one farm to another, always searching for work.

Fortunately, urban agriculture jobs tend to be just the opposite. Workers in controlled environment greenhouses can harvest fresh foods year-round in laboratory or near-laboratory conditions. Not only that, when done correctly, vertical farms can pay their employees well.

In many communities, urban agriculture jobs offer workers living wages and full benefits as they work in a field that is making a positive difference in their own communities. In many low-income urban areas, this type of job is a vital shot in the arm for the local economy.

There is no question that many cities are aiming to become more sustainable. Urban agriculture is an excellent way to work toward this goal.

Urban agriculture tends to be far more sustainable than its more traditional rural counterparts. Typically, there’s no polluting runoff and no soil degradation. There’s no need to truck vegetables in from across the country, burning fossil fuels the whole way. And urban agriculture can add carbon-filtering greenery to what may otherwise be a barren concrete jungle.

If you’re looking for an urban agriculture solution for your city, Eden Green Technology may have just the thing for you. We offer a turnkey greenhouse opportunity with our expert assistance through every step of the process, so anyone can create a thriving greenhouse business from the ground up.

Each acre-and-a-half greenhouse can produce 11-13 harvests per year – up to 500 tons of leafy green vegetables to feed the local population. Each one also provides 30 full-time, year-round urban agriculture jobs in safe conditions and with appropriate wages and benefits.

Our greenhouses are designed for sustainability, using 98% less water and 99% less land than typical rural farms. They also use 90% less light energy than many other vertical farming systems.