NASA has been working for decades to tackle food production both on Earth and in space. Feeding astronauts during long-term space exploration means stretching resources to grow plants in space – including minimizing water use and energy consumption and eliminating soil. 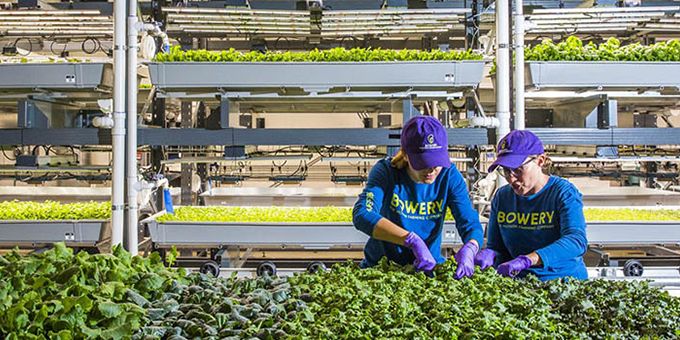 The United Nations predicts Earth will have to feed another 2.3 billion people by 2050, mostly concentrated in urban centers far from farmland. Conventional agriculture may not be able to meet that demand, but luckily NASA has been working for decades to tackle food production both on Earth and in space. Feeding astronauts during long-term space exploration means stretching resources to grow plants in space – including minimizing water use and energy consumption and eliminating soil.

NASA initially pioneered these techniques on the ground by building the country’s first vertical farm. Inside a decommissioned hypobaric chamber left over from testing the Mercury space capsule, technologists stacked rows of hydroponic trays like bookshelves against the walls. Then systems for lighting, ventilation, and circulating water were added using off-the-shelf parts. Various crops were planted on the stacked trays to test how well they would grow in water and without the benefit of sunlight or open air.

This innovative approach to farming created a foundation for the industry of controlled environment agriculture, or CEA.

Plenty uses less than 1% of the water of traditional farming, and the company's two-acre farm produces similar yields to a 720-acre outdoor farm.

Currently a global market worth $2.9 billion, some estimates project the vertical farming market could reach $7.3 billion by 2025.

“The entire industry is built on NASA research,” said Storey. Since its early days, NASA has explored bioregenerative life-support systems, with plants recycling waste, producing food and oxygen, and eliminating carbon dioxide. The Closed Ecological Life Support System program originated with the Life Sciences Division at NASA’s Kennedy Space Center in Florida, funding university research to identify the best plants and their ideal growth conditions, and the agency built growth chambers to expand on those findings. 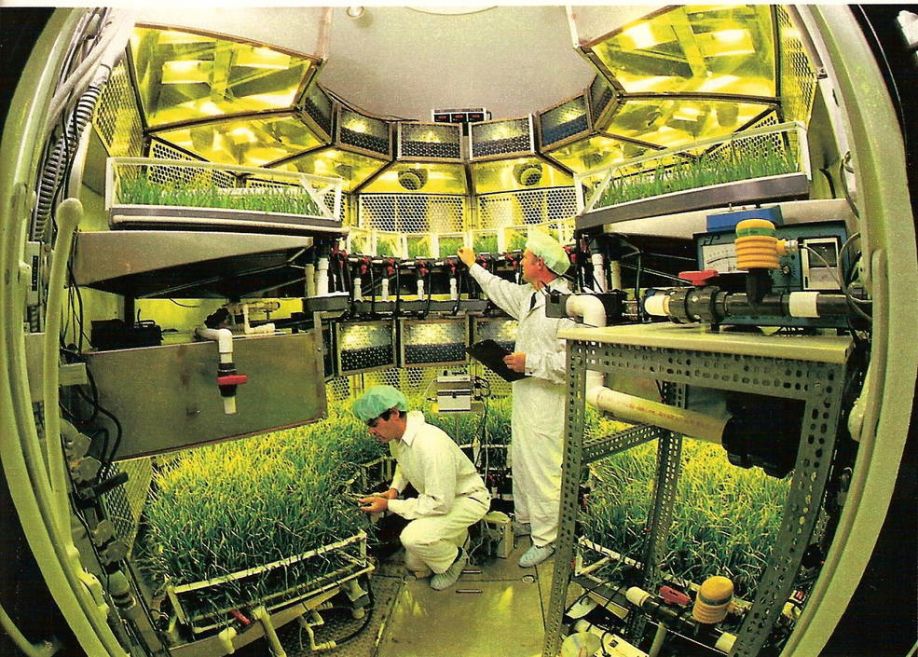 “Growing crops is a multi-functional life-support approach,” said Ray Wheeler, a plant physiologist at NASA Kennedy. “But we needed to answer the question, can you do this in a closed environment like you have in space?”

Wheeler conducted multiple growth experiments in the Biomass Production Chamber, built in the 1980s. He said years of experimentation produced a “firehose of data,” all of which was made public.

From that work, Plenty adopted a type of “nutrient film technique” that the agency pioneered. This soil-free hydroponic system circulates a constant, minimal film of water around seedlings, containing all the necessary nutrients.

The approach produces fresher, healthier, more flavorful plants. Uniformity of lighting along with data-driven controls over all other variables tied to a plant community makes growth rates and output predictable, according to Storey. Harvesting young plants while they’re more tender and flavorful means the produce tastes better than plants that are allowed to fully mature. And because the time from farm to table is dramatically shorter, the plants retain the freshness and nutritive value typically lost during long-haul transportation.

By controlling every element of the environment, Plenty can avoid using harmful chemicals like pesticides and herbicides that also impact plant health. 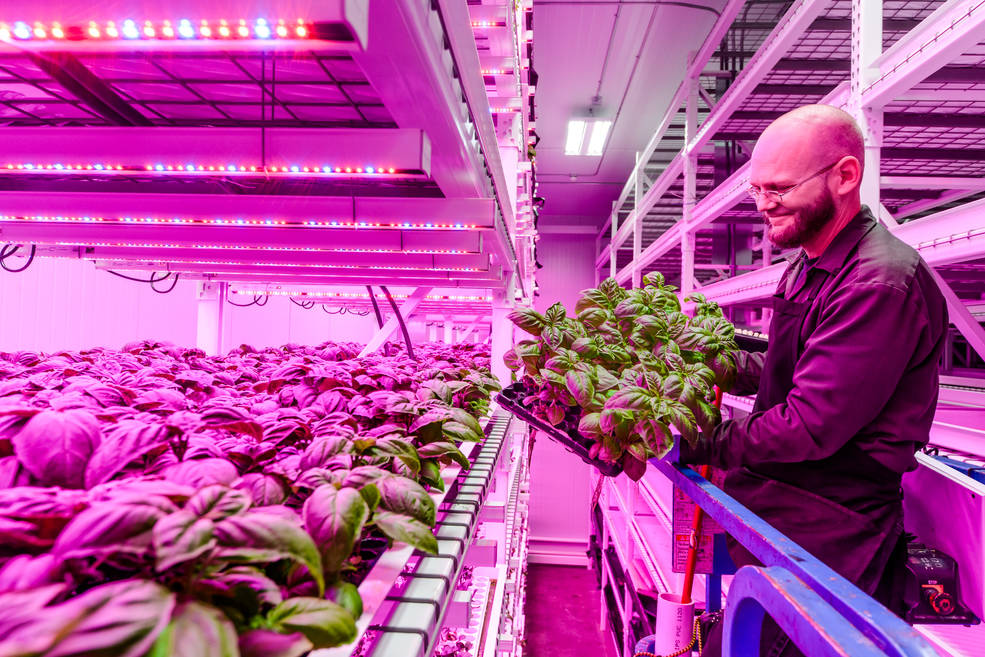 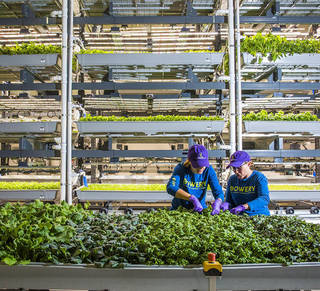 Robert Colangelo, Green Sense president, said one example is testing the ratio of red to blue in LED lights, their intensity, and how long they shine. This approach, based on NASA research, means using only the light wavelengths a plant needs, which reduces electricity consumption.

Bowery’s system uses artificial intelligence to make sense of crop data and manage growth cycles. Just as a person can learn to identify tip burn on a leaf of butter lettuce, computers can be taught the same kind of recognition. Using thousands of photographs, computers learn to identify problems and automatically adjust parts of the system, said Sztul.

Additional NASA expertise comes in the way of trained staff: several Bowery employees worked on NASA-funded plant tests in a simulated space habitat in Antarctica, as did the chief engineer at Green Sense Farms. 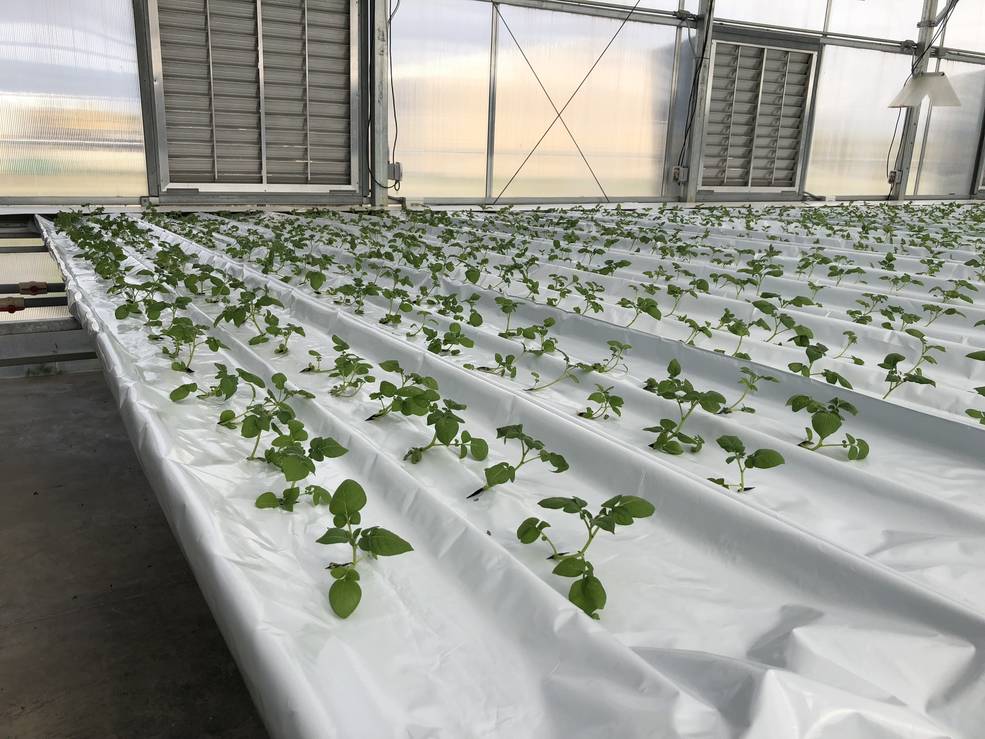 CSS Farms uses this technique to grow seed potatoes called minitubers in greenhouses. Unlike plants grown from seed, potatoes are grown from either cut potatoes or minitubers. These can be shipped and planted in fields, where they grow into plants that produce large potatoes for consumption.

Soil-growing methods typically yield five or six minitubers per plant. “We’ll harvest two or three times a week for a 12-week harvest period in three crops per year. In a nutrient film system, you can get 30 to 50 minitubers per plant,” said Matt Barrow, greenhouse manager with CSS Farms.

As NASA continues to advance life-support systems in preparation for missions to the Moon and Mars, these will support the further growth of the CEA industry.

NASA has a long history of transferring technology to the private sector. The agency’s Spinoff publication profiles NASA technologies that have transformed into commercial products and services, demonstrating the broader benefits of America’s investment in its space program. Spinoff is a publication of the Technology Transfer program in NASA’s Space Technology Mission Directorate (STMD).

For more information on how NASA brings space technology down to Earth, visit: ww.spinoff.nasa.gov