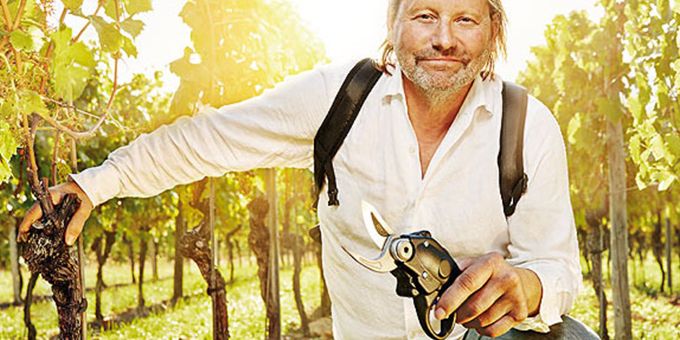 Anyone who has already suffered from mouse arm or tennis elbow knows exactly about the painful and persistent condition that is known in medicine as RSI (injuries due to frequently repeated movement sequences). Even the smallest movement can cause extreme and long-lasting damage to muscles, tendons and nerves, if it is repeated thousands of times. If mouse arm results from operating computers, the equivalent for wine and fruit growers, who must trim countless branches and shoots, is ”shearing arm“. In order to counter the risk of injuries due to repeated movement patterns and support the muscles, many people now use motorised shears. The Pony model from Italian manufacturer Campagnola is a particularly lightweight, low-power device that works with a FAULHABER DC-micromotor in order to offer the highest efficiency at the lowest weight.

Each vine can make dozen of shoots each year but only one or two are necessary for the production of wine. All redundant shoots are cut off directly at the roots and the remaining shoots are pruned which means at least one cut per shoot. Each hectare contains between 5,000 and 10,000 vines, which means that approx. 100,000 cuts per hectare must be done alone in wine growing. This applies to fruit growing. Even small trees, such as ones normally found in intensive farming, must be trimmed and pruned hundreds of times. The quality of the fruit and wine depends heavily on the correct cutting techniques.

Every cut, which is placed with simple pruning shears, requires considerable effort from the arms and hands and leads to symptoms of fatigue after a certain amount of time. The risk of contracting RSI is extremely high, particularly during the cutting phase. In order to prevent this, device manufacturers developed mechanical pruning shears as soon as the technical requirements were available. At the beginning, pneumatic systems were the only mechanical solution – even today you can hear the sound of compressors in vineyards in Autumn and Winter. 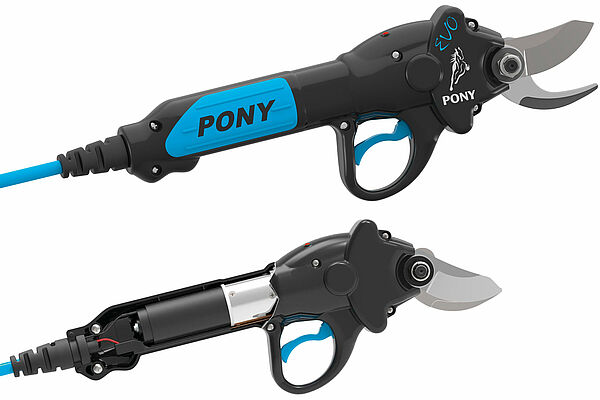 A compressed air hose that can be more than 100 metres long under pressure is needed to transfer the force into the wine grower’s shears. While pneumatic shears are still the optimal technology for cutting strong branches, handling is problematic particularly in wine growing. This is because wine growers must go down again to the compressor after they are finished pruning a row and it must be repositioned before they can continue with the next row.

It only became possible to replace compressed air with electrical energy by using lightweight lithiumion batteries. This allows the wine growers to simply go round the corner and move up and down in the rows without limitation. Electric shears are connected to the battery which is normally fastened onto the wine growers belt with a short cable while the electrical motors are integrated into the shear’s handles and apply the necessary force. “During the cutting season, the operator must often use the shears relentlessly for weeks“, explains Patrizio Pellicanò, the Technical Director at Campagnola. “This means that the operator must hold the device for the entire day and every gram of weight counts.“

The company based in Bologna in Northern Italy has therefore decided to develop a pair of shears that simplify the wine grower’s work in every respect. The motor is the crucial component but not only in regards to its weight. “The drive must have high torque while the weight is reduced to a minimum“, explains Christian Lucini of FAULHABER MINIMOTOR, who is responsible for the project. “It must also work at high speeds in order to make the cuts as quickly as possible. Due to the start-stop nature of this work with constant load changes, the shears must also provide force without warming-up while the energy consumption is minimised and the operating time maximised.“

Campagnola has carried out a series of tests comparing the drives of different manufacturers based on these criteria. “The 2657 CR DC-micromotor from FAULHABER clearly won the comparisons“, recollects Patrizio Pellicanò. “With just 156 grams for the motor, the entire drive system weights 80 grams less than other motor gearhead combinations. In addition to this, high efficiency in combination with low energy consumption provide a usage duration of ten hours per charge, which corresponds to 20% more battery life in comparison to rival products.“

The Pony model is the lightest pair of shears that Campagnola offers and one of the lightest models on the market. It can perform up to 70 cuts per minute and can be operated both automatically and manually. In automatic mode, the cutting blades fully close as soon as the finger presses the trigger. In manual mode, the cutting blades conform to finger movements, which means that the motor reacts very precisely and the output power must be adjusted exactly to the movement. The DC-motor manages this fine coordination with flying colours. The shears also protect the drive-supporting wires. If wires are detected between the cutting blades, the shears stop cutting automatically.

A cutting counter, which also records the operating times, makes it possible to monitor the cutting movements in detail and allows the operator to comply with the service intervals. Campagnola recommends an overhaul of the shears after 400,000 cuts. “The devices run constantly when trimming vines and fruit trees particularly in large companies“, explains Patrizio Pellicanò. “In addition to this constant load, the shears must be able to work for four or five years without any problems. The DC-micromotor from FAULHABER has proven itself with its characteristics and high reliability in continuous operation. We have definitely made the right choice here.“