An enthusiastic evangelist for modern vertical farming, Wihelmsson explained, “We took the concept of farming outdoors and brought it indoors, creating a controlled ecosystem where we can grow under optimal conditions year-round. We have a facility here of 7,000 sq meters. 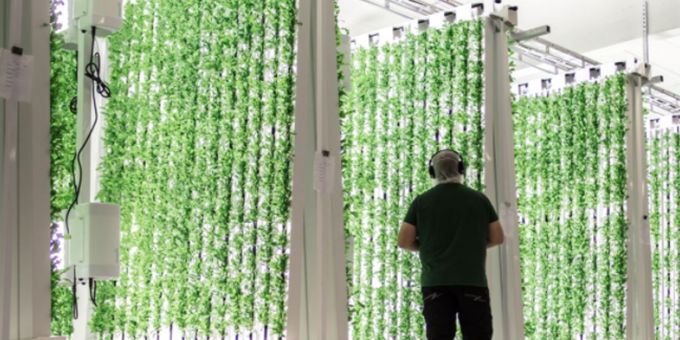 It all began in 2017 when three friends, Magnus Crommert, Cristoffer Barath and Erik Lundgren decided to try modern indoor farming. Our own Plant & Light Expert, Ida Fällström, remembers when Magnus visited our Göteborg office, introduced us to his team’s vision of modern farming and left with an ELIXIA LED grow light under his arm. With that LED grow light, he started to conduct tests in his garage while the rest of the business took form, including bringing on a young business visionary, Andreas Wihelmsson, as partner and CEO. Fast forward to today, and their operation has grown to become Ljusgårda AB, a successful and sustainable climate certified farm in Tibro, Sweden.

Recently, in one of our most popular webinars of all time, Wihelmsson fired us up with Ljusgårda’s amazing story – building a thriving modern farm in what was once a factory, by “replacing the tractor with lights and the shovel with an iPad.” An enthusiastic evangelist for modern vertical farming, Wihelmsson explained, “We took the concept of farming outdoors and brought it indoors, creating a controlled ecosystem where we can grow under optimal conditions year-round. We have a facility here of 7,000 square meters. A year from now, we will have outgrown this facility and we will begin building the next one.” He continued, “If someone would have told me years ago that I would be growing salad for a living, I would have thought they were joking. Yet today thousands of families are eating our salad every week.”

What are the secrets to Ljusgårda’s overwhelming success? Here are 5 key things we learned in our webinar about starting a successful vertical farm:

Wihelmsson commented that “More than 70% of all the fruits and vegetables Sweden eats are imported from other countries.” This leads not only to higher emissions, but it also negatively affects plant quality and nutrients due to the transportation time. Because indoor vertical farming enables Ljusgårda to grow locally, they always get their products to store within 24 hours of harvest to retain quality and nutrition.

2. Give Your Customers What They Really Want (Not What You Think They Want)

Ljusgårda produces salad greens, including lettuce and arugula, for Swedish tables year-round. Wihelmsson noted, “When it comes to making a produce buying decision in Sweden, 7 out of 10 people say that one of the most important factors is that it's Swedish. Sustainability and price are also very important. We provide a great tasting Swedish product that is sustainable, and we sell it at roughly the same price as imported products.”

When it comes to giving customers what they want on an individual crop level, Ljusgårda is able to use LED grow lighting and intelligent controls to influence every phase of plant growth, from biomass development to finish and flavour. Wihelmsson commented, “One very interesting experience we had was with our rocket salad, the first product we launched. I remember our initial tryouts and it tasted terrible.” He laughed, “We were by far growing the worst tasting rocket salad in the world, but we became better. We developed a good product with a robust peppery flavour, and we went to grocery stores for people to try it. Their polite reactions were that it was okay, so we knew that we had it dead wrong. We progressed by altering our rocket salad’s flavour through lighting control and conducting countless in-house and in-store taste tests.”

Wihelmsson continued, “We realized that Swedes didn’t want a traditional strong rocket salad. They wanted a mild one. We have a term in Sweden, Lagom, which relates to balance – not too little, not too much. We ended up producing a milder rocket and outsold all other products in that store.” He concluded, “You don't always know what the customer actually wants until you test in person and can see their reaction. If in the future customers demand a spicier rocket salad, we can achieve that with our flexible LED lighting. We have the ability to control taste, nutrition, quality, colour, biomass, almost everything – because light has a huge effect on the plants. You just first need to figure out what your customer wants in their food.”

3. Control Your Light to Optimize Your Production

An intelligent LED lighting strategy can help you achieve your crop goals. We have worked with Ljusgårda to accelerate their production of arugula and reduce their production time by 19%, by making adjustments to their lighting strategies. Wihelmsson commented, “For us, light control is very important to our production. If we look at our collaboration with Heliospectra, we chose to go with ELIXIA LEDs because we needed maximum flexibility. The other reason was their positive effect on reducing power consumption.”

Ljusgårda has also found that flexible LEDs can help them control risk and even save crops. Wihelmsson noted, “Now that we have been running this farm for a few years, we’ve come to see that our flexible lights can actually be used to compensate for human errors, or things like the water tank failing or other issues. In such cases we have been able to change the spectrum to recovery lighting. Our LED lighting has meant a lot to us and the flexibility has been extremely important.”

4. Automate Step by Step (and Plan Several Steps Ahead)

Wihelmsson talked about the company’s approach to automation, “We had to redesign the system to be able to get it automated step by step and growing-wise it's been working. For us most steps in production will be semi-automated, leveraging a machine but with human beings still involved, while other steps will be fully automated.”

He cautioned, “You need to do the math and see where automation makes economic sense for you. Our approach is to look at what takes up the most labour, what is most costly in the whole economic calculation, and address it. We also run the numbers to plan ahead. For example, we are preparing some processes for automation, but we won't automate them until production volumes hit certain critical numbers. Overall, it’s best to take it one step at a time, starting with a semi-automated approach.”

5. Keep it Simple and Learn from Others

Rather than focusing on the high-tech aspects of their operation, Ljusgårda found that their consumers responded better to a simpler, more straightforward message. Wihelmsson commented, “We know that our consumers want local produce, and so it says three times on the bag that our salad is from Sweden. We keep our messaging and packaging simple, ensuring people know that we are passionate about growing great tasting, nutritious and sustainable food that they can eat in good conscience year-round. This simple, positive message has helped put our bag salad in the top three in each and every store, and it’s even number one in several of them.”

If you are interested in starting your own vertical farming operation or taking your farm to the next level, Wihelmsson suggested that you try to learn from others who have succeeded. He commented, “We have something we like to call common farmer sense. It's a direct translation from Swedish, and it basically consists of us questioning all the solutions that are out there and always telling ourselves not to reinvent the wheel. See if any industry or any other grower has already taken an approach you want to try. Take a look at it, learn from it and then start growing from there.”