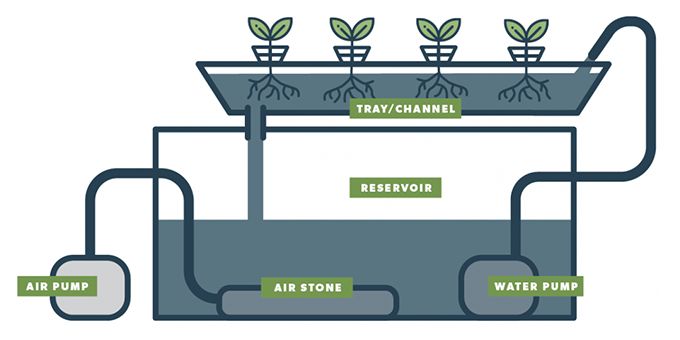 The Deep Flow Technique (DFT) is similar to two other hydroponic systems, but it ultimately works in it’s own way.

In hydroponics, plants are grown with nutrient water instead of soil.

Some systems actively deliver the nutrient water to the plant roots to stimulate growth.

While other systems work by simply letting the plant roots sit in the nutrient water indefinitely.

DFT hydroponic systems do a little of both.

Aerated nutrient water from a reservoir is pumped up into one side of a tray.

The plants sit on top of the tray with their roots hanging inside.

As the water is pumped in, it circulates around, delivering nutrients to the plants’ roots.

On the opposite end of the tray, a drain brings the used water back down to the reservoir.

Because DFT catches and recycles water like this, it uses very little of it!

And both systems tend to unevenly distribute nutrients because the water only ever enters the system from one spot.

So, they both work best with shorter trays.

Otherwise, the plants at the far end of the tray get fewer nutrients.

However, NFT and DFT look similar, but there are key differences in how they function.

For one thing, the trays in DFT systems are often deeper, because in NFT only a thin “film” of nutrient water passes through at a time.

Plus, because it’s so little water, the trays are set at an angle in NFT systems, so that the water can reach the other side.

One concern with an NFT system, is how much it relies on the water pump.

Because only a tiny bit of water passes through at a time, if the water pump shuts off or breaks, the plants will not receive any nutrient or water and will die.

Since DFT systems hold more water at a time, there is enough sitting water in the trays to keep the plants alive, if a problem with the pump occurs.

In DWC systems, plants sit on the surface of a deep reservoir of aerated water.

In this case, they have a constant supply of the nutrient water and the plants can grow and grow.

But if the air pump breaks, the plants will drown.

Additionally, plants in DFT systems usually float on the surface, or just above the water, like in DWC systems.

This is accomplished with Styrofoam or a similar material.

However, DFT systems aren’t nearly as deep, saving space and making it easy to stack the trays for vertical farming.

It’s the best of both worlds.

As you can probably tell, DFT hydroponic systems are a great choice!

We even use it in our Pure Greens Container Farms to grow crops all year-round!