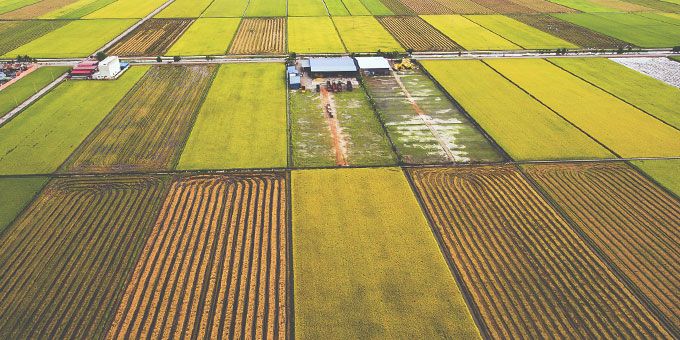 An agriculture drone is an unmanned aerial vehicle applied to farming for monitor crop growth and enhance crop productivity. This bird’s eye view of the fields enables farmers to tackle issues about irrigation, pest attack, and soil variation. Drone farming is useful for a number of applications; these include crop monitoring, soil assessment, plant emergence and population, soil fertility, crop protection, harvest planning, irrigation, and drainage. There have been multiple use cases of drone farming, wherein significant return on investment was noticed. For instance, according to a statistic by SenseFly, an agricultural drone manufacturer, drone farming reduced about 15%-20% of nitrogen application in Russia and Poland, while France witnessed a 10% impact on average rapeseed yield. In another instance, in Spain, grape production witnessed a 17% increase after drone application on fields.

The factors driving the drone farming market include increase in venture funding for the development of farm drones; availability of software solutions for field survey and data analytics; and the rising need to reduce environmental costs by precise application of crop inputs. Moreover, regulatory exemptions across a few countries also prove to be driving this market. For instance, due to the exemption by the US Federal Aviation Administration (FAA) under the part 107 rule, the adoption of drones has grown strongly in US agriculture. On the other hand, the Asia Pacific drone farming market is projected to grow at the highest CAGR, particularly due to the rising demand for drones in China, India, and Australia.

The agricultural drones market is projected to grow at nearly 40% in the coming years to reach a value of USD 4.8 billion by 2024. The extensive use of agricultural drones in seeding, spraying, and livestock farming has drawn the attention of venture capitalists to this market. Agricultural drones have been finding multiple applications; wherein numerous companies have been developing drones to deal with weed control. In 2018, DJI, one of the major Chinese agricultural drone manufacturers, launched their latest agricultural UAV T16 with upgraded three-dimensional flight function, in Shenzhen, China, to realize AI intelligent scene recognition and intelligent obstacle avoidance. However, there are a few disadvantages associated with drone farming; the major ones being the limited range and flight time of agriculture drones–which can be overcome using advanced technologies—and interference from birds. 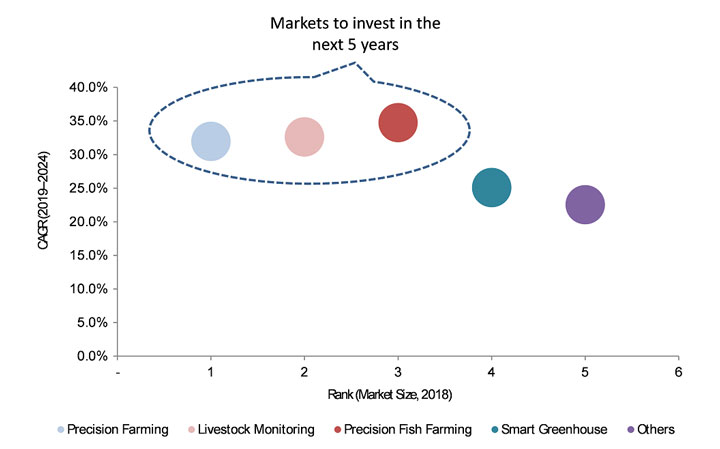 Potential markets for the application of the agricultural drones

Application of drones has been extensive in precision farming, ranging from soil and crop field analysis to planting and pesticide spraying. Additionally, the majority of drone manufacturers have been investing in precision farming for their drone solutions. However, with the increasing significance of animal husbandry and aquaculture in the global market, the application of drones is also being explored in these industries for livestock welfare.

The market for drone farming is being tapped by multiple local and international drone manufacturing companies and has been attracting funds from venture capital companies such as Qualcomm Ventures (US), Andreessen Horowitz (US), Draper Associates (US), Intel Capital (US), Felicis Venture (US), Lux Capital (US), and Google Ventures (US). PX4 is one of the leading open-source, auto-piloting software offered by Pixhawk (Switzerland) in the drone farming market. As per the analysis by marketsandmarkets, North America was the dominant market for drone farming in 2018, based on the adoption of agricultural drones. Also, favorable regulations in the region have been increasing the adoption of drone farming in the region. The adoption of smart agriculture techniques is expected to enhance the growth opportunities for drone farming in Asia Pacific countries, reflecting a growth potential of more than 37% in the coming years.