“The robot saves at least five hours in transport time a week, and the working day is quieter and calmer,” Broberg said. “I already take 15,000 to 17,000 steps a day in my job, so I definitely don’t miss the walk to the pallet stacker." 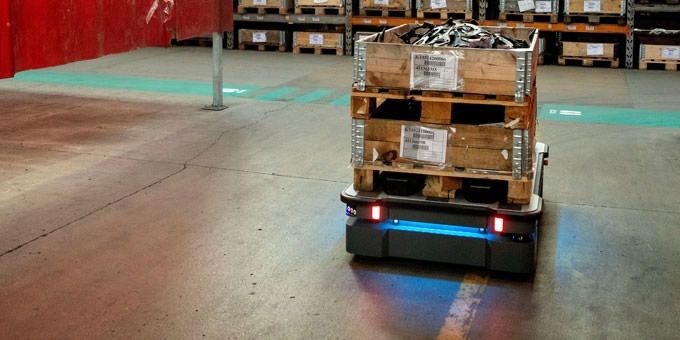 Every year, 100,000 pallets of materials and components arrive at Kverneland Group in Denmark. The materials and components are machined and fitted, so that finished agricultural machinery can leave the factory’s warehouse in containers. Around 500 employees share 55,000 m2 (592,000 square feet) of factory space with the company’s many powered pallet trucks and lifters, which constantly move all over the production site.. Kverneland is now using collaborative and autonomous mobile robots (AMR) from Mobile Industrial Robots to reduce the amount of indoor truck driving in order to improve the working environment and productivity.

When pallets need to be transported inside the production area, there are many options available. Traditionally, companies have used fixed roller conveyors and chain conveyors, manual transport on pallet trucks or manned stackers, pallet lifters and forklift trucks to move items on pallets from one department to another.

Kverneland Group, a global supplier of agricultural machinery located in Kerteminde, Denmark, is now using modern robot technology that operates almost silently and does not require manning. The MiR500, a collaborative and autonomous mobile robot (AMR), has significantly changed the working environment in the area where it collects hardened components. This is confirmed by Mikael Broberg, who has worked as an operator for 33 years at Kverneland. Mikael works with hardening and robot welding and is very glad that he no longer has to look over his shoulder for stackers and trucks moving in the area where he works.

“The robot saves at least five hours in transport time a week, and the working day is quieter and calmer,” Broberg said. “I already take 15,000 to 17,000 steps a day in my job, so I definitely don’t miss the walk to the pallet stacker. Now I can focus on planning and producing, which is much more valuable than me spending time on supplying components in the material department and collecting empty pallets. The robot eases the workload, optimises the work process and increases safety. All it takes is a press of the icon on the robot’s tablet, and it does what it’s supposed to.”

Michael has witnessed how technological developments constantly create changes in the workplace at Kverneland.

“I’ve seen many things during my 33 years here,” he said. “I’ve been run over a couple of times by trucks and stackers because someone was looking the wrong way. I once had my foot trapped. So I think a lot about safety. If we get 10–20 mobile robots, which replace the trucks, safety will be significantly improved, because it minimises the risk of collisions with people.”

The mobile MiR500 is the same size as a pallet, and it can lift and transport up to 500 kg (1102 lbs) at a time. At Kverneland, it moves between four stations where it delivers and collects pallets. The robot is fitted with a pallet lifter, which can automatically load and unload pallets onto pallet frames.

Almost silent, the robot moves safely around employees, shelves and trucks 24 hours a day, which adds up to many miles in a week. The robot's route is set at 500 metres (about a third of a mile), leading from the hardening department to the material department to the warehouse, where it collects empty packaging and comes back again. During any 24-hour period, MiR500 covers a total of 48 km (30 miles) at Kverneland, with a maximum capacity utilisation of four routes in an hour.

When MiR500 meets an obstacle, it automatically changes its route to avoid stopping and delaying the logistics process. MiR500 is equipped with 3D cameras and the latest laser scanning technology, with 360 degree vision for optimal safety.

Flow and flexibility are crucial

Kverneland produces thousands of machines every year. Before the machines are ready for delivery to customers all over the world, over 2,000 pallets are handled every week. Production changes constantly, and this means the solutions that Kverneland chooses must be extremely flexible.

At Kverneland’s Technical Production Department, Jakob Klokker works continuously to optimise the entire flow in Kverneland’s production – from goods in, to finished goods in stock. The company wants to move each component as few times as possible while reducing the intermediate stock. At the same time, a healthy working environment and high levels of safety are always in focus.

“Getting the items to the right place at the right time is crucial to ensuring we avoid delays in our internal order programme,”  Klokker said. “We want to remove trucks because they are expensive in terms of maintenance and man-hours. And the employees always have to keep an eye out for them. We have seen collisions and minor injuries, and we obviously want to see less of that.”

As a result, the benefit of automating the factory’s internal logistics using a robust and collaborative mobile robot from Mobile Industrial Robots was self-evident to Klokker. The goal of investing in the first MiR500 robot was to learn about the concrete options Kverneland would have with the new technology. After a short while, Klokker could easily identify ideal use scenarios for autonomous robots.

“Mobile robots can free up manpower for production, executing all of the trivial operations,” he said. “Today, we have many places in production where an operator has to transport the components to the next stage several times a day. Some employees walk and drive a lot during a working day. We try to eliminate steps with production supermarkets, where we build complete kits. The idea is that the part comes to you, so that you don’t have to spend time looking for it when you stand at the assembly line because the part is in the kit. Therefore, I’m now looking at how the components are moved around and where it makes sense to transport the components using mobile robots on a fixed shuttle service or as a taxi service.”

Kverneland examines how components are moved around and where it makes sense to transport the components using mobile robots on a fixed shuttle service or as a taxi service.

The size of the MiR robot is important, allowing it to smoothly deliver equipment on time, despite any obstacles along the route.

The robot operates on fixed daily routes, moving goods to four stations. It is a solution that can be scaled up by expanding the number of destinations or trips.

MiR robots are designed to move safely among people by using built-in scanners, sensors and cameras.

If we get 10–20 mobile robots, which replace the trucks, safety will be significantly improved, because it minimises the risk of collisions with people,” says Michael.

Kverneland produces thousands of machines every year. Before the machines are ready for delivery to customers all over the world, over 2000 pallets are handled every week.

The operators in the welding and hardening plant are very pleased that they no longer have to look over their shoulder to see if a stacker or truck is in the area where they are working.

At Kverneland, MiR500 moves between four stations where it delivers and collects pallets. The robot is fitted with a pallet lifter, which can automatically load and unload pallets onto pallet frames.

Trucks and robots give way to each other

Before the MiR500 started to operate in Kverneland’s production area, Klokker informed his colleagues that “a new colleague" was starting who could do some of the work of moving things from the hardening plant.

“I pointed out that they had to show the robot respect and not stand in its way,” he said.
It’s not taking anyone’s job. We want our staff to focus primarily on production. The robot has been well received by people and they have become used to it. Once you have understood its design with routes and missions, operating it isn’t difficult. It’s nice that the robot can move around just like the rest of us without having to have a closed lane or magnetic strip in the floor. It’s clever that you can get it to do what you want."

One of the truck operators was sceptical of the new “road users” in the factory areas.

“’We’ll run over it one day,’ he said. But it hasn’t happened. The robot will stop if a truck is driven towards it. The robot doesn’t drive into anything.”

Just recently, three Japanese visitors from Kverneland’s parent company Kubota , visited Kverneland. Klokker proudly showed the visitors the MiR500 robot, saying: “This is the future.” The Japanese answered: “No, this is now!”