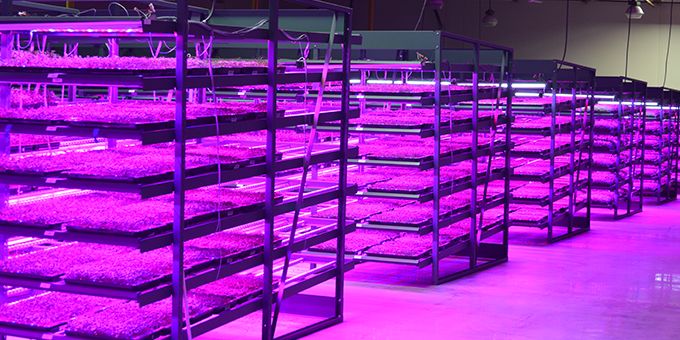 The Growth of Vertical Farms: A Case Study

FarmEcologys’s use of LEDs is unique even within the category of indoor farmers using LEDs because it has used LEDs since its founding. Legacy lighting, like High-intensity Discharge lamps (HID), High Pressure Sodium lights (HPS), or even fluorescent were not considered. Even though LED lighting clearly presents a huge advantage compared to legacy lighting methods, energy consumption is still a very substantial expense and FarmEcology’s goal was to explore the limits of what was possible for maximum efficiency consistent with highest product quality and yield. “We wanted a new LED concept for our vertical farming that uses the best available technology, but also accomplishes a number of other objectives such as using the least amount of energy possible while still being very effective and very simple,” says Steve Oster, Chief Technical Officer at FarmEcology.

FarmEcology currently has a total of 10,080 ft.² of growing area in the racks and uses 590 kW-hours per day for lighting. Vertical farms, also called Controlled-Environment Agriculture (CEA), can’t just be environmentally sustainable, they also need to be economically viable. Oster notes that many such farms quickly go out of business because they underestimate the ongoing operating costs.

“Our business is all about efficiency,” says Oster. “We’ve even coined the term Efficient Controlled-Environment Agriculture, or ECEA, because the biggest problem that needs to be solved is the economic problem. Osram plays a critical role in helping us do that with its LED technology. By reducing our energy usage down to a minimal level, we are only consuming about 3 Watts of energy per square foot of planted area, which is outstanding. The Oslon LEDs are not only very efficient, they are also extremely reliable and robust. In fact, they are probably the lowest power consumer in the industry right now. ”

Oster says a key benefit of the Oslon LEDs is efficiency. “We are in the low to mid-50 percent range in terms of efficiency,” he says. “These LEDs are incredibly efficient. In fact, they are the best that I’ve seen, and I’ve tried a number of different approaches. I’ve tried using mid-power LEDs from various manufacturers and using a lot of them. There is just no comparison with what we’ve been able to achieve with Osram.”

One of FarmEcology’s approaches involves a system called AIMS, Asymmetric Integral Motion Sequence. It combines the lightbar placement, orientation, spacing, and PAR output levels with the movement of the growing trays through the racks; this eliminates the problems of light distribution and red/blue ratio distribution from arrays of large, single-wavelength LEDs positioned so close to the plants (about 6 inches). Red and Blue are used because they are the most effectively-utilized wavelengths and the greens do quite well with them alone. The farm’s light sources are low power, which enables them to drive the LEDs at their most efficient current, generating much lower levels of PAR than are typical in the industry yet with excellent results. FarmEcology doesn’t have the typical light/dark periods that are also typically used in CEA because the leafy greens don’t require traditional light/dark periods. The AIMS system enables this innovative combination of light management techniques at a CAPEX cost that was a fraction of traditional systems. It is also a scalable system, 1 to n racks as needed and helps the farm achieve an average leafy greens yield of 2.9 ounces (83 grams) per kilowatt-hour of electrical energy used for lighting.

Another benefit of LEDs in vertical farming is speed. The entire growing cycle from the time FarmEcology plants the seeds to harvests the crop can be as little as 7 to 9 days for their radish greens, and 15 to 18 days for their other microgreens.

“We are getting everything we wanted out of our lighting system at a fraction of the power used by typical LED systems, so it’s been a tremendous success,” says Oster. “Our microgreens are the highest quality and they are growing very rapidly.”

Going forward, FarmEcology has plans to add edible flowers to its crop. This introduces new lighting challenges because these plants, unlike microgreens, can grow to three to four feet in height.

“We’re not worried because Osram is with us every step of the way,” says Oster. “Already, we’ve received a lot of great technical support for the spectral simulations we’ve been running. Osram is a true partner and we couldn’t be happier with the relationship.”