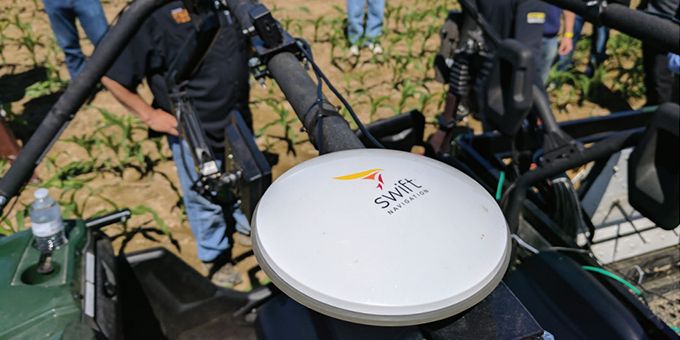 Prairie Robotics began with a group of four University of Regina students with a shared passion for automation and robotics. Their work together on a university capstone project was elevated by a knack to learn and a drive to achieve excellence. The team continued to build on this initial passion in their work to develop unique autonomous robotic control systems that are intuitive, sustainable and practical.

The autonomous robotics project that Prairie Robotics initially—and continued—to take on was the agBOT Challenge. The agBOT Challenge showcases autonomous machines that are capable of varying agricultural functions including planting seeds, removing weeds, gathering data and observing plant health. By delivering a combination of progressive machinery with the software required to process data needed to virtually and economically manage crops, the outcome of the agBOT Challenge has the potential to greatly impact the agriculture industry. The challenge is open to universities, entrepreneurs and private groups.

In 2016, the Prairie Robotics team competed in the Seeding Competition. This challenge consisted of creating an unmanned, robotic device (aka “agBOT”) that could: autonomously plant two or four 1000-ft rows of corn at a time and autonomously turn, change seed variety and population per prescription while having the ability to autonomously dock and load two varieties of seed and starter fertilizer, weigh the seed and fertilizer and communicate in stream.

In 2017, the Prairie Robotics team competed in the Weed and Feed Competition. This challenged teams to produce an agBOT that could: autonomously maneuver two or four 1000-ft rows at a time and autonomously turn, autonomously observe crop plants and fertilize plants as needed, identify three common weeds within the row and between the rows, arrange for weed to die either chemically or mechanically as the agBOT moves through the field and provide real time observation methods of fertilizing and/or treating the plants back to the base station.

In both challenges, Prairie Robotics turned to Swift Navigation to provide position solution. The team specifically selected Swift Navigation’s Piksi® Multi GNSS receiver for its centimeter-level accuracy, its ability to achieve an RTK fix within seconds and its affordable price. Designed to be easily integrated into existing equipment, Piksi Multi was an ideal selection to be placed in the retrofitted Yamaha Viking which became Prairie Robotics’ “Spraybot”. In addition to its centimeter-level accuracy, Piksi Multi is ideal for agricultural autonomy localization with its ability to provide location information without lane markings or other distinct features, repeatability and stationary heading.

The Spraybot delivered inch-accurate positioning and instantaneous heading. Its autonomous navigation had built-in obstacle selection and avoidance. It was designed to both detect and identify plants and rows and deliver spot spraying. Its real-time feedback delivered vehicle and sprayer diagnostics, identified plan positions and video streams. Its integrated safety features ensured that the rover would immediately stop if any error was detected. And in the spirit of the agBOT Challenge the Spraybot was a scalable and transferable solution for agricultural use.

During the competition, Piksi Multi was able to deliver instantaneous heading and redundancy.

Alternately, Swift Navigation launched Duro in 2017, a ruggedized version of the Piksi Multi GNSS receiver that is ideal for agricultural applications. Its ability to withstand extreme conditions and easily retrofit existing equipment has great implications on autonomous agricultural solutions. Swift Navigation looks forward to what’s ahead for Prairie Robotics and in continuing to provide GNSS receivers that help monitor fertilizer and seed placement, track equipment and aid navigation-focused tasks.