A typical windmill with 8 diameter wheel can lift water 185 feet and pump about 150 gallons an hour in 15 to 20 mph winds when using a 1 ¾ “pump cylinder.

Windmills utilize the power of the wind to generate electricity or pump water, using the movement of the air that takes place naturally in the earth’s atmosphere. The windmill’s turbine blades capture the energy from the wind and turn it into mechanical energy by spinning a generator that creates electricity.

Most of the windmills in the past have been used for non-electrical applications, and wind water pumps were merely mechanical mechanisms located on top of a wooden tower, pumping water for watering livestock and irrigation.

Unlike the older wind pumps, these new systems need no scheduled maintenance; and they can operate autonomously for years between inspections. In areas with modest wind resources, windmill generated electric pumping systems can provide a cost-effective alternative to small diesel pumps for both drinking water and small plot irrigation. This water system can now be found at several hundred sites in more than 20 countries.

Pumping the water is fine where electricity is supplied. When the electricity distribution grid does not extend into rural areas, alternative power sources must be employed.  In these scenarios, manual or animal labor must be utilized, supplemented by diesel or gasoline engines if the fuel is available. The best choices are solar cells or windmills, which have not been widely exploited.

Using windmills as electric pumping systems is a developing technology that joins highly reliable small wind turbines and traditional electric centrifugal pumps to deliver a cost-effective alternative to using a fossil fuel pumping system for a community’s water supply. The basis of wind-electric water pumping technology has been the introduction of high-reliability small wind turbines that can operate for years without maintenance.

The wide blades on a water pumping windmill are designed for low start-up wind speeds and slow-speed operation; whereas an electrical generator's thin blades run at higher rpm.

When considering a suitable pump, the flow rate is important. The flow rate is the amount of water that the pump will deliver. The other factor is the head. This is the height through which the pump will raise the water. Both of these are related in that increasing the head will decrease the delivered flow. Bends and other friction losses in the pipes need to be abated, otherwise these losses will require greater pressure, and as the pressure and the head are diametrically related, this means that the system will need a larger head.

A water pumping windmill is simple, and efficient. The blades of the windmill wheel catch the wind, which turns the rotor. The wheel assembly is attached to a hub assembly, which drives a geared mechanism that converts the rotary motion to an up-and-down motion. This motion drives a pump rod, up and down inside of a pipe in the well. A cylinder with a sealed plunger going up and down inside forces the water up the pipe. Each upstroke pulls water into the cylinder, while on the downstroke, a check valve in the bottom keeps the water from being pushed out, so the water is forced up the pipe with the next upstroke. 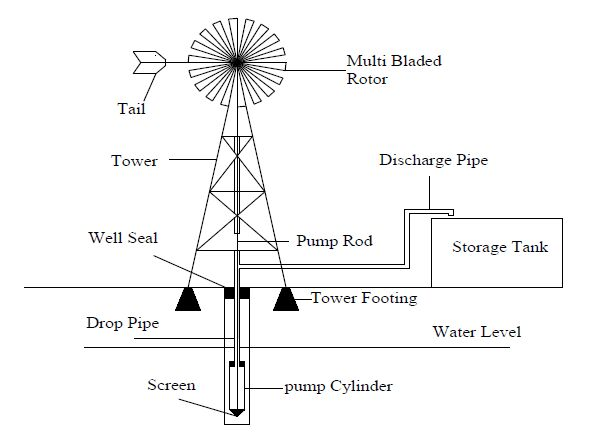 Wind is naturally intermittent, requiring some method of storage. Pumping water up to a tank or to a pond, which then feeds the water by gravity is more efficient than transferring the energy to batteries. The amount of water a windmill can pump is controlled by the size of the pump cylinder, the elevation to which the water needs to be pumped, the size of the blades, and how windy it is where the windmill is installed.

The cost of the tank and structure needs to be balanced with the cost of the batteries. If batteries are used as a backup to the windmill, power can be diverted to the batteries when not pumping the water directly. Add a 33’ steel tower to 8’ wheels and the cost will be around $4,000.

A complete 8’ windmill weighs about 350 pounds. Professional installers can be found in most areas of the United States. Although DIYers might be able to build a windmill, I do not suggest it, as too many things can go wrong. It is important to center a windmill directly over a well. Bending or flexing the pump rod will lead to extra friction and early failure of the moving parts. It is also important that the top of the tower be level. All windmills are meant to rotate on the tower axis facing into the wind. If the tower is not level, the windmill will turn downward when the wind is calm and it will be difficult to get the blades to return to face the wind. The well itself should have a good water table at about 100 to 400 feet with the average depth being 250 feet. The well could cost between $1500 and $6000, depending on the depth.

An average windmill with the blades spinning in a brisk breeze of 15 to 20 MPH will pump about three gallons a minute whenever the wind blows. The wind blows about 35% of the time in many areas, which will produce around 1500 gallons of water a day.

The driving force for the use of a windmill water pump is the need for safe and drinkable water in developing countries and in areas where there is a lack of electricity and an electrical grid.