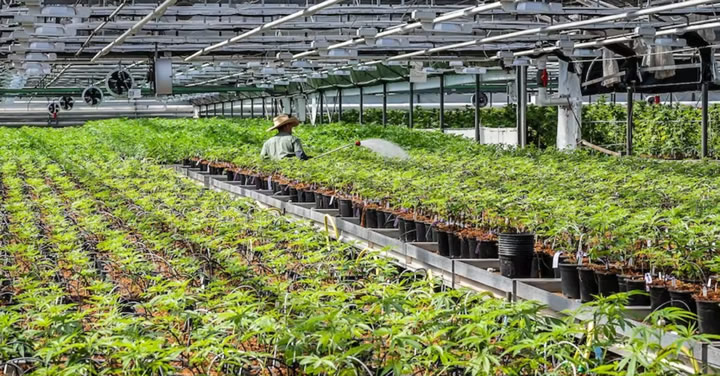 Leafly Holdings, Inc. (“Leafly”), a leading online cannabis discovery marketplace and resource for cannabis consumers, released today its Cannabis Harvest Report, an unparalleled analysis of the last year of cannabis farming in the U.S. Created in partnership with Whitney Economics, a global leader in cannabis and hemp business consulting and economic research, the report offers the most comprehensive look at adult-use cannabis crop licensing, production, and value.

Now in its second year, the Leafly Cannabis Harvest Report calculates what the United States Department of Agriculture does not, and is the only analysis of its kind. Over a period of three months, Leafly’s award-winning investigative team performed a one-of-a-kind synthesis of licensing reports with crop production totals, and sales and tax figures from the 15 states with operating cannabis markets.

In some states, cannabis is consistently one of the highest-value crops in the field, but the federal government - and even some state and local governments - do not track harvest amounts, ignoring the value of the crop.

The report outlines the barriers America’s cannabis farmers continue to face due to federal marijuana prohibition. For example, licensed cannabis farms often lack access to basic banking services and crop insurance. Those farmers also report trouble obtaining personal mortgages and car loans, due to the nature of their trade.

David Downs, the report’s lead author and Leafly’s California Bureau Chief, says the report arms consumers and policymakers with information on America’s progress toward legalization, and the barriers still ahead.

“Simply put, local and federal governments do not treat cannabis farmers like farmers. There is systematic discrimination at the local, state, and federal level. Adult-use cannabis is a top cash crop in states where it’s legal, but that song goes unsung,” Downs said. “There is no federal cannabis policy other than prohibition and our reporting shows that each day’s delay punishes the smallest farmers the most. The American cannabis industry is fragmented but publishing otherwise unreported data can help illuminate pathways to an ideal industry.”

Recreational marijuana could be legal in half of the United States if the handful of states with cannabis on ballots this November pass them. And a recent Gallup poll found that 68 percent of Americans support adult-use cannabis legalization and 91 percent support medical cannabis. The plant, however, remains federally illegal and the cultivation of a single cannabis plant is a felony that can yield up to a five-year prison sentence and/or a fine of up to $250,000.

Known as the informed way to shop for cannabis, Leafly is a marketplace that helps connect millions of annual website visitors to more than 7,800 brands and more than 5,200 dispensaries. Leafly has been gathering cannabis employment and sales data since 2015 with its annual Jobs Report, filling a crucial information gap created by a lack of data collection from the US Department of Labor, which does not count cannabis jobs due to federal prohibition. Similarly, the US Department of Agriculture does not account for cannabis crops, and excludes cannabis farmers from all of its programs, due to cannabis’ outdated status as a federal Schedule I drug.

To read the report in full, visit: https://www.leafly.com/news/industry/how-much-weed-grown-us-2022

Leafly’s investigative team, working in partnership with Whitney Economics, examined the 15 states where adult-use cannabis is for sale in licensed stores. We used state licensing totals, and followed the USDA’s approach to determining annual crop value. We researched the average annual wholesale price of marijuana in each state using Cannabis Benchmarks, and multiplied each state’s average price of wholesale cannabis by the amount produced. Many states do not report annual production, so Leafly infers it from sources including cultivation tax revenue totals, retail sales totals, or retail amounts sold. Farmer interviews, field measurements, and past research also provide metrics to normalize disparate data across states, like wet weight versus dry weight, or the value of trimmed cannabis versus untrimmed. To learn more about our methodology in detail, visit page 27 of the report.

Whitney Economics is a global leader in cannabis and hemp business consulting, data, and economic research. The firm’s work applying economic principles to create actionable operational and policy recommendations has been recognized by national governments and by leaders throughout the economic, investment, and business communities.