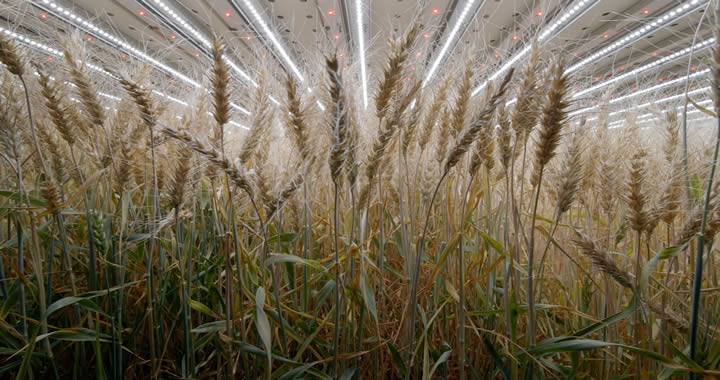 Sharm El-Sheikh, Egypt, November 10, 2022 – Leading vertical farming company Infarm and co-host of the Food Systems Pavilion at COP 27 has successfully produced wheat in an indoor farm, using no soil, no chemical pesticides and much less water compared to open field farming. Infarm is the first vertical farming company to tackle staple crop production in a controlled environment. The first trials demonstrated exceptional results, allowing a projection of 11.7 Kg per m2 yield per year. Further projected at scale, this is the equivalent of 117 tonnes per hectare per year - 26 times that of open-field farming yields.

This production is independent of external climatic conditions and is thus genuinely climate resilient. This is an important milestone, as climate impacts worsen, in providing staple food in a controlled environment.

Guy Galonska, CTO and co-founder of Infarm: ”To continue to feed the world's growing population, we need to achieve higher crop yields which we have now proven to be possible for wheat through indoor, controlled environment agriculture. Our results are significant when compared to the average yield of outdoor wheat production, which is about 4.5 tonnes per hectare per year and heavily dependent on weather and seasons. We are confident that wheat can be grown successfully at scale indoors as a climate-resilient alternative. Our record yield could potentially be increased by a further 50% in the coming years using a combination of improved genetics, hardware, and optimised growth environments.”

Erez Galonska, CEO and co-founder of Infarm: “Being able to grow wheat indoors is a milestone for Infarm and of significant importance for global food security, as wheat is a calorie-dense but resource-intense crop that is a core component of diets worldwide. Westarted Infarm to find new ways of producing food to feed the world’s growing population and the results show that we are a big step closer to achieving this goal.”

Wheat provides much of the global population with its daily energy requirements and is a significant source of protein, accounting for almost 40% of daily protein intake in some regions. Wheat is grown over a larger area than any other crop and due to a destabilised environment, the yield per hectare is expected to decline. To continue to feed the world's growing population it is necessary that we will need to increase wheat yields which is now possible through indoor, controlled environment agriculture.

Founded in 2013, Infarm is the world's fastest-growing vertical farming company. In partnership with more than 30 of the world’s top retail chains in 10 countries in North America, Asia, and Europe, Infarm’s fresh produce is available in more than 1,850 stores worldwide. By 2030 Infarm plans to expand to 20 countries on those three continents and to the Middle East. The company’s product catalogue consists of a variety of more than 75 plants such as herbs, leafy greens, salads, microgreens, and mushrooms, and will soon include strawberries, peppers, cherry tomatoes, and peas. The company's modular farming systems are highly efficient, capable of growing more than 500,000 plants annually on just 40m2 of floor space. In addition to using 95% less land, Infarm requires 95% less water than traditional farming methods and uses no chemical pesticides. So far, Infarm has saved more than 130 million litres of water, more than 180,000m2 of land, and nearly 1.6 million food miles (about 3 million km) with its production methods. Infarm has set a science-based net-zero carbon target based on The Science Based Targets initiative. Infarm’s operating entities are embedded in a holding company, infarm Indoor Urban Farming B.V, which is registered in The Netherlands. Infarm is a Certified B Corporation™. For more information, please visit www.infarm.com.