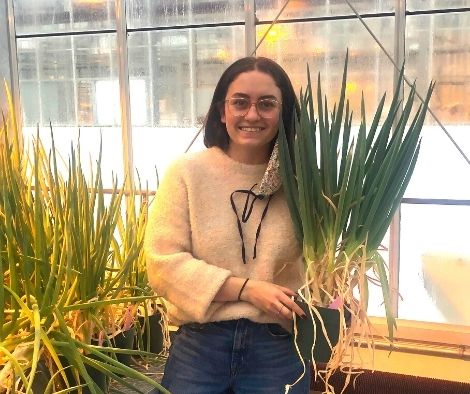 “We know there has been a lot of drought on the prairies, and people’s livelihoods are on the line,” said Ariana Forand, a Master’s student in the College of Agriculture and Bioresources at the University of Saskatchewan (USask) . “It would be amazing to find modifications that would allow plants to resist multiple stresses.”

Forand led a project that explored how calcium and boron play a beneficial role in strengthening plant cell walls, helping reduce the dehydration that comes with freezing and drought and increasing resistance to pathogens.

As it turned out, the perfect plant to test the theory on was onions.

The team analyzed onion samples and collected data at the Advanced Photon Source (APS) in Illinois, thanks to the facility’s partnership with the Canadian Light Source (CLS) at the University of Saskatchewan.

“This project really builds on the work of a previous USask master’s student, Jun Liu, who did freezing stress work,” said Forand, “and we know that in both drought and cold, plants lose water in similar ways.”

Onions are good plants to use “because you can easily peel away a single layer of cells and see the changes in the cell wall,” a plant structure key to protecting against stresses of various kinds.

A unique feature of this research, the results of which were published in the journal Plants, was that it looked at multiple stresses at once – dehydration in Welsh onions and cooking onions, and pathogen resistance in Arabidopsis, a small flowering weed native to Africa.

After adding calcium mixed with water to the greenhouse-grown onions, Forand used synchrotron X-ray microscopy to confirm not only that the plants had taken up the calcium but that it localized in the cell wall.

Further testing with dry conditions showed a reduction in water loss in the treated plants. Similarly, boron is known to bind with pectin in the cell walls of Arabidopsis, strengthening its resistance to introduced disease.

“We were looking at ways to structurally reinforce cell walls,” said Forand. Confirming that calcium and boron reduce the impact of moisture loss and disease opens the door to looking for a similar effect in other plants.

Dr. Karen Tanino, USask professor of plant sciences and Forand’s supervisor, said that in any given year, “one stress could be more prevalent than another – you just can’t really predict what it will be. This research presents a chance to protect plants against stress variations from year to year.”

Both Forand and Tanino believe expanding on their research presents opportunities to strengthen resistance to moisture loss and disease in both field crops and in the horticulture industry.

Tanino, the first USask plant science researcher to make use of synchrotron techniques at the CLS in a project that examined freezing resistance in, coincidentally, onions, said that while shoring up plant cell walls against various stresses is not a silver bullet, “it is a first line of defense.”

The researchers are grateful to the Natural Sciences and Engineering Research Council of Canada, University of Saskatchewan, Canadian Light Source, Advanced Photon Source, and others for supporting this research.