According to the National Institute of Food and Agriculture (NIFA) of the United States Department of Agriculture (USDA), “plant biotechnology is a set of techniques used to adapt plants for specific needs or opportunities.” Plant biotechnology plays a vital role in developing new varieties and traits, which include transgenic (genetic engineered) crops, using genetics and genomics and marker-assisted selection (MAS). It has a broad spectrum of applications, which include bio-stimulants/bio-fertilizers, bio-pesticides, biotech traits, epigenetics, cloud biology, gene editing, breeding, and diagnostics//data analytics. Growing demand from such application sectors is driving the development in multiple use cases of plant biotechnology, wherein significant growth has been noticed.

Technological innovation in plant biotechnology sub-sectors such as biostimulants is creating opportunities for manufacturers to come up with new products in the biostimulants and plant growth promotors segments.

The plant biotechnology market is driven by factors such as an increase in venture funding for the development of biologicals & microbiomes and breeding & trait technologies and the availability of diagnostic solutions and cloud biology. Government regulations are a major factor supporting the growth or restricting the use of such technologies in different regions. Though the national regulatory bodies are establishing several regulatory changes associated with plant genetics, many countries are yet to seriously consider the regulation of molecular breeding technology. The regulatory authorities of various countries such as India, Australia, and Malaysia are encouraging researchers and producers to adopt the technique of molecular breeding. Europe has stringent rules and regulations for GM crops and organisms; however, molecular breeding has not yet been regulated in this region, which further boosts the market potential in major European countries such as Italy and Spain. Owing to the favorable regulatory environment and as many countries are adopting techniques of molecular breeding for the improvement of crops and livestock, the growing opportunities and high penetration rates are being tapped into by key players as a part of their expansion strategies.

in the plant biotechnology market 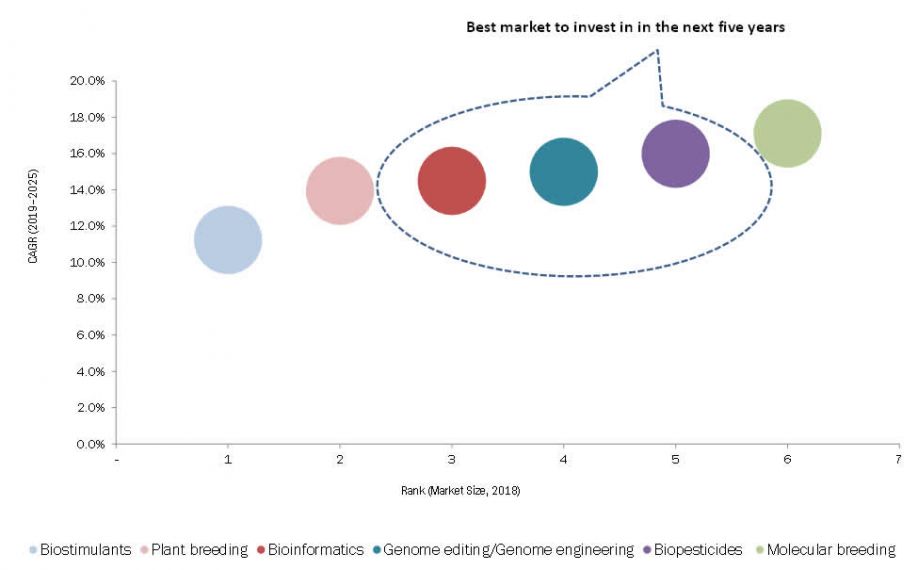 The market for plant technology is led by multiple local and international biotechnology solution providers such as Thermo Fisher, Bayer, Eurofins, Illumina, Intertek, DowDupont, Limagrain, and Syngenta. Strong funding by the private and public sectors toward agrigenomic research such as the development of high-throughput sequencing systems, application of MAS, and genomic selection in field and vegetable crops is expected to drive the growth of the market over the next five years.

Since private plant breeders conduct the majority of the breeding programs, the investment in plant breeding is also concentrated in the private sector. Even in developing countries, private investment in seed and crop biotech research has been growing exponentially. The majority of the seed manufacturers have also stationed in-house breeding facilities. The plant breeding market is consolidated in a manner similar to that of the commercial seed industry, wherein Bayer (including Monsanto), Syngenta, and DowDuPont have accounted for a major share in 2017. According to industry experts, countries such as the Netherlands and the UK witnessed 100% adoption of molecular breeding techniques for crops, while the adoption of GM techniques has been more than 85% in the US and Brazil, majorly for corn and soybeans.