Cellular agriculture is the production of agricultural products from cell cultures rather than entire animals or plants. Cell lines, growth media, scaling technologies, scaffold materials, and 3D tissue systems are among those used to produce agricultural products from cell culture. The growing environmental and ethical problems associated with industrial farming have impacted the global livestock industry. However, the desire to eat animal-derived protein products has led to the emergence of cellular agriculture. The rising consumer awareness over the health benefits offered by cultured meat and non-dairy milk is driving the demand for further innovation in cell-cultured products. The increased acceptance of plant-based meat products, dairy substitutes, and insect-based foods is boosting market growth.

Cell-produced meat products are estimated to grow exponentially as nutritionally rich alternatives with minimal impact on the environment, and hence, a growing number of industry participants are manufacturing cell-based meat products. The growing affluence of the middle-class population, rising health consciousness among consumers, and the increasing acceptance for cell-based food with nutritious ingredients and health benefits are driving the consumption of meat analogs in North America.

What factors are expected to impact the growth of cellular agriculture market?

The chart below reflects the projected consumption of various meat types around the world for the period spanning from 2017 to 2026. Poultry is one of the major categories in the cultured meat market, which is expected to show the highest growth during the forecast period, due to an increase in demand for affordable animal protein over red meat. 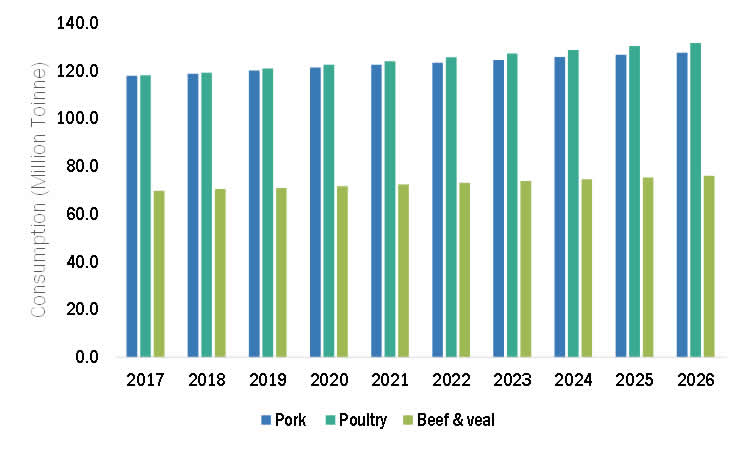 Developing regions such as Asia Pacific and Africa are expected to account the highest growth in the next 10 years, due to a shift from cereal-based diet to protein-based diet. This growing trend of protein consumption is expected to create several opportunities for various meat processors and food companies to invest in alternative meat protein such as cultured meat to fulfill the consumer demand for meat.

Which companies are capitalizing the opportunities in cellular agriculture and what are the strategies employed by them?

Some of the major companies commercializing cellular agriculture-based products include Impossible Foods (US), Beyond Meat (US), Modern Meadow (US), Clara Foods (US), Perfect Day (US), Bolt Threads (US), and Gingko Bioworks (US).

Recent advancements in food technology have helped in the development of new alternate protein products such as plant-based protein, cultured meat, and edible insects. They provide a considerable amount of protein but require fewer natural resources compared to common protein sources such as meat and fish. This practice has been gaining popularity in the market and has high growth potential. A notable number of players have emerged in the animal protein sector.