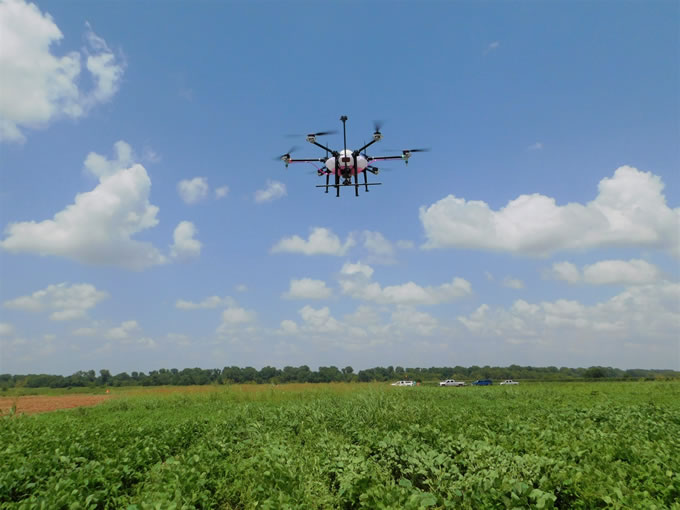 UAVs, often referred to as drones, can travel where it is hard to navigate by ground – from flying over dense forests to hovering over lakes, streams and other bodies of water. And when equipped with the right tools, researchers say they can be quite effective at both finding and treating problem weeds.

UAVs equipped with cameras and other sensor technologies have successfully measured weed density and have been used to identify and map multiple weed species with greater than 90 percent accuracy. They also have been used to detect differences in canopy temperatures between glyphosate-susceptible and glyphosate-resistant weed species – data used to identify resistant weeds with an accuracy level of more than 95 percent.

One downside: Analyzing data collected by UAVs takes time, and that can mean a costly delay in weed management decisions. Researchers say artificial intelligence tools can eliminate the lag as computers learn to identify and map weeds on the go. More work must be done, though, to develop the massive databases of weed images needed for machine learning.

Researchers are currently testing a semi-autonomous UAV spray system guided by global positioning system (GPS) coordinates fed into the UAV’s flight planner. They’ve found that UAVs can hover over targeted treatment areas with an accuracy of one to two feet – improving the precision and safety of herbicide applications.

Before such systems become widely used in agriculture, though, researchers say it is important to learn more about spray drift patterns, the impact of droplet size, and the environmental and health impacts of UAV-based herbicide applications. Such information will be critical to the U.S. Environmental Protection Agency (EPA) as it works to establish policies that will address acceptable UAV use patterns, herbicide labeling, and regulatory, safety and enforcement issues.

But those investigating UAVs as a tool for weed control are upbeat about the potential. With the appropriate computer processing capacity and battery power, UAVs may one day become fully autonomous – able to identify weeds and make site-specific herbicide applications in real-time, all as part of a sustainable, site-specific weed management system.

Aquatic weed management is an area where UAVs can really shine. Weed mapping is crucial to assessing the risk of plant invaders that threaten vital water resources. But it can be a tough task to accomplish by boat or shoreline observations.

According to Rob Richardson, Ph.D., of North Carolina State University, UAVs equipped with high-resolution cameras can quickly travel over bodies of water to detect new weed infestations, estimate the biomass of submersed or floating weed beds, and monitor weeds before and after treatment.

“UAVs give us a timely, low-cost way to reach areas of a waterway that would otherwise be inaccessible by boat due to shallow water, lack of launch facilities, or the presence of stumps, rocks or other hazards,” Richardson said. “They can be an important tool for rapid response and for making better-informed weed management decisions.”

UAVs can also be used to apply treatments to specific areas over broad swaths of weedy invaders, Richardson says. Research is underway to explore important aquatic treatment variables – from the most appropriate applicator nozzles to best practices for managing spray drift.

UAVs used in agriculture must be registered with the Federal Aviation Administration (FAA). The FAA also offers a certification process for operators. Details can be found on the FAA's website, specifically at Parts 107 and 137 of its small, unmanned aircraft regulations.

About the Weed Science Society of America

The Weed Science Society of America, a nonprofit scientific society, was founded in 1956 to encourage and promote the development of knowledge concerning weeds and their impact on the environment. The Society promotes research, education and extension outreach activities related to weeds, provides science-based information to the public and policy makers, fosters awareness of weeds and their impact on managed and natural ecosystems, and promotes cooperation among weed science organizations across the nation and around the world. For more information, visit http://www.wssa.net.