Ludwig Burger, Tom Polansek for Reuters:  Undergoing final tests before the liquid is replaced with weedkiller, the Swiss robot is one of new breed of AI weeders that investors say could disrupt the $100 billion pesticides and seeds industry by reducing the need for universal herbicides and the genetically modified (GM) crops that tolerate them. 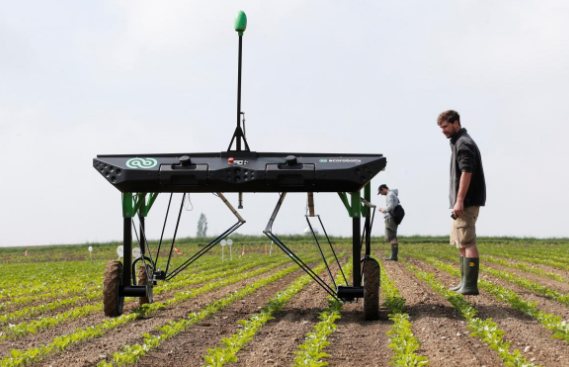 Dominated by companies such as Bayer, DowDuPont, BASF and Syngenta, the industry is bracing for the impact of digital agricultural technology and some firms are already adapting their business models.

The stakes are high. Herbicide sales are worth $26 billion a year and account for 46 percent of pesticides revenue overall while 90 percent of GM seeds have some herbicide tolerance built in, according to market researcher Phillips McDougall.

“Some of the profit pools that are now in the hands of the big agrochemical companies will shift, partly to the farmer and partly to the equipment manufacturers,” said Cedric Lecamp, who runs the $1 billion Pictet-Nutrition fund that invests in companies along the food supply chain.

In response, producers such as Germany’s Bayer have sought partners for their own precision spraying systems while ChemChina’s Syngenta [CNNCC.UL], for example, is looking to develop crop protection products suited to the new equipment.

While still in its infancy, the plant-by-plant approach heralds a marked shift from standard methods of crop production.

Now, non-selective weedkillers such as Monsanto’s Roundup are sprayed on vast tracts of land planted with tolerant GM seeds, driving one of the most lucrative business models in the industry.  Full Article: