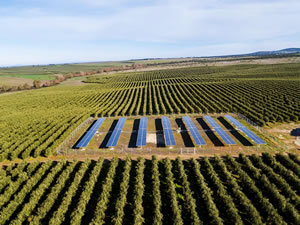 Steve Gillman for Horizon:  Rising populations and climate change are putting pressure on the water needed for agriculture but a solar-powered irrigation system may reduce the amount that farmers use – while simultaneously slashing the sector’s greenhouse gas emissions.

Agriculture accounts for almost 70 % of the world’s water use, but with the global population expected to increase to nine billion by 2050, demand for this already scarce resource will increase by an expected 55 %. For dry climates, this is a huge challenge for the farmers – and those they feed.

‘These countries need to keep producing food so the efficient use of water is key for the future,’ said Dr Luis Narvarte, an associate professor at the Technical University of Madrid, Spain, who is studying the links between water and energy.

Meanwhile, climate change is causing temperatures around the world to soar, adding more stress to the water available in dry regions, while irrigation activity itself is also adding to the problem as the agricultural sector burns huge amounts of fossil fuel such as diesel to pump water around farms.

‘If we don’t reduce the use of water and traditional energy (fossil fuels), our food system won’t be sustainable,’ said Dr Narvarte, who is also the project coordinator of the EU-funded MASLOWATEN consortium, which has developed a solar powered irrigation system that can produce a 30 % reduction in water consumption.  Full Article: