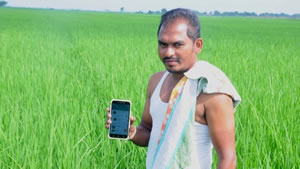 Jorn Madslien for BBC:  India's farmers have never had it easy; drought, crop failure, low market prices and lack of modernisation have taken their toll on the nation's population, about half of whom work in agriculture.

Every year thousands of farmers take their own lives. So can crop management apps help?

Voruganti Surendra is a farmer who grows paddy rice on an acre of farmland in Guntur District, Andhra Pradesh.

He and hundreds of his fellow farmers are using a new app that can recognise a growing number of crop pests and diseases and give advice on how to treat them.

The app, called Plantix, was developed thousands of miles away in Berlin, Germany, by a group of graduate students and scientists who came together to help farmers combat disease, pest damage and nutrient deficiency in their crops.

"It was really important for us to understand what farmers wanted," says Charlotte Schumann, co-founder of Peat (Progressive Environmental & Agricultural Technologies) the company behind the app, "so we did a lot of groundwork in India".  Full Article: