It is important to recognize that many aspects of the negative connotations that come along with modern pesticides are largely rooted in how the pesticides are used, not necessarily how they work. 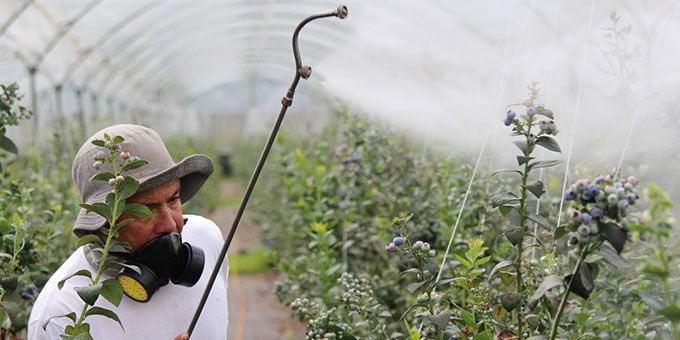 Before You Grab Your Torch and Pitchfork…

Don’t get too carried away by the title of this article. Remember, we said reconsider, not eliminate completely, the use of pesticides by commercial farmers. Pesticides are a necessary tool for nearly all commercial farmers and although they may have a not-so-positive reputation in certain circles, it is important to recognize that many aspects of the negative connotations that come along with modern pesticides are largely rooted in how the pesticides are used, not necessarily how they work. By this, we mean that it is easy for farmers to become lazy or irresponsible with their pesticide applications. We have no intentions for this article to read as a piece of anti-pesticide propaganda, but instead, as an addition to our previous article on making the most out of your pesticides. So, what do we mean by why farmers should reconsider pesticide use?

The Problem with Pesticides

Often referred to as the necessary evil of commercial agriculture, pesticides have been a gift and a curse in terms of battling pests. Farmers apply pesticides to millions of agricultural crops on an annual basis. As one might imagine, that scale of pesticide coverage will inherently result in some collateral damage, as pesticide overspray and over-application inevitably leeches into the soil, water systems, or comes into contact with unintended, potentially beneficial insects. Given that the US alone uses around one billion pounds of pesticides annually, the undesirable consequences of inefficient or poorly calculated pesticide use can quickly add up — leading to problematic situations. Let’s explore:

Loss of Pollinators – Consider this —  according to the USDA, approximately one out of every three bites of food that you take are made possible thanks to pollinators. This alone should be enough reason to remain cognizant of how our pesticide application is affecting the pollinator population.

High Cost, Not Always High Return – In a perfect world, pesticide application would be performed strategically, only applying when the time is right. For some insects, that time may be during mating season, for others it may be during times of inactivity, and of course, some may require pesticides year-round. The point being most farmers take a preventative approach to their pesticide application practices. That is, making a best guess as to when a specific pest will become a threat or is most likely active and applying pesticides without true visibility to how much pest pressure their crops are actually facing. Additionally, some farmers also tend to skip the step of calibrating their application equipment before each use. This leads to wasted pesticides — which can be costly, increase labor requirements, and in the event that you didn’t calibrate your equipment and aren’t applying enough pesticides, potential crop loss.

Development of Pesticide Tolerance – As we discussed in a previous post, many pests can develop a resistance to pesticides. We live in a modern-era where scientists have the knowledge and capabilities to — typically — create a new & improved pesticide to replace previous versions that insects are no longer affected by. This often leaves farmers asking one question…

Why Not Just Develop New Pesticides?

Seems simple enough, right? Unfortunately, there are a bevy of concerns in simply developing a new pesticide each time insects become resistant to others.

New Resistance Development – Just as occurs with existing pesticides, insects are likely to develop a resistance to new pesticides just as quickly, if not quicker. This results in a costly venture for researchers, farmers, and ultimately, consumers. By releasing the latest and greatest pesticide each season, researchers are left with little time to study the potential long-term impact and effects of the new synthetic. Notwithstanding the potential environmental effects, farmers will face higher costs of operation, and that will likely be passed to consumers. Meanwhile, the vicious cycle continues as pests will potentially develop new resistances each season, rendering management efforts unsustainable.

Collateral Damage – There are already concerns from environmentalists regarding the impact pesticides have on pollinators, soil, water, and surrounding ecosystems. Given this, it stands to reason that these potential issues would likely be amplified by continuously developing and adding new pesticides into cultivation practices.

Increased Input Costs – Naturally, the latest and greatest pesticides are going to impact farmers’ bottom lines given that they will likely come at a price premium.

Sustainability – Regardless of which reason speaks to you the most, they all maintain a common theme, lack of sustainability. Many conservationists and environmentalists would argue that the practice of creating new pesticides on-demand is not one that maintains any semblance of long-term sustainability.

The Value of Pest Monitoring for Sustainability

By now, hopefully you have a better picture as to why massive blanket-applications or the creation of new pesticides aren’t only unsustainable, but simply aren’t the most logical approach — so, what is the solution? Calculated and data-backed application!

Farmers have been monitoring for pests in their fields for thousands of years. The problem with manual monitoring practices like sticky traps or scouring for signs of pest pressure is that it is a time and labor-intensive task that’s ripe for human error and not easily scalable. Sending farm hands out to check and accurately report on traps spread across tens or even hundreds of acres means that agricultural operators will likely receive intel once it is too late to implement a pesticide. For this reason, it should now be easier to understand why many farmers opt to simply take the blanket application approach, applying preventative pesticides to their entire operation, instead of waiting for farm hands to identify a potential pest problem.

Here’s where modern technology is reinventing the wheel. Ag-tech startup, FarmSense has developed an award-winning device that allows farmers to monitor pest pressure of their crops in real-time. Founded by Drs. Keogh, Singh, and Hickle, FarmSense’s pest monitoring devices (FlightSensor™) are strategically placed throughout a farmer’s fields. The sensor is capable of detecting, counting, and identifying insects that pass through the device. Once this data is collected, it is shared on a personal dashboard that the farmer has access to — in real-time.

By giving farmers real-time pest pressure visibility of their entire agricultural operation, FarmSense’s FlightSensor is revolutionizing modern agriculture practices, leading to farmers reconsidering how, when, where, and why pesticides are used. This device and the technology behind it have been recognized by numerous agricultural and tech award programs like the Bill and Melinda Gates Foundation Award, the Vodafone Wireless Innovation Award, and the National Science Foundation Award.

FarmSense’s FlightSensor is a must-have tool for any farmer who wants to make more efficient use of their pesticides or even potentially reduce their pesticide use. Advances in pest monitoring technology will likely prove to be key in maintaining long-term sustainability for all the hard work that you’ve put into your farm. For more information or to request a demo of the FlightSensor, contact FarmSense.