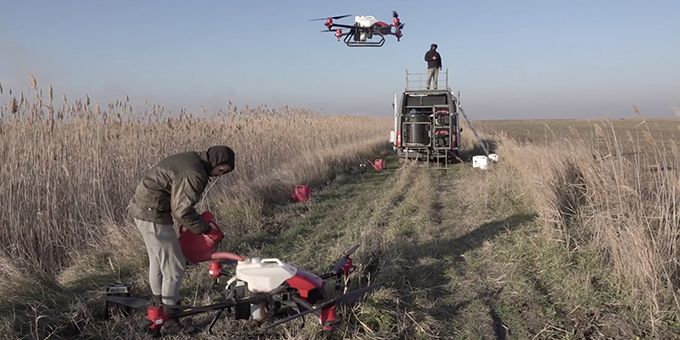 In the South of Russia, XAG's agricultural drone has been introduced to the full cycle of rice cultivation. It brings new hope to farmers as the use of drone demonstrates the potential to reduce the cost of rice production. Facing the relatively tight water shortage, drone technology from XAG can help Russian farmers obtain decent yield and support the expansion of rice field territories.

XAG, a global leader of agri-tech innovations, has been scaling up its agricultural drones in rice growing across China, Japan, and Vietnam. While Russia has contributed to over 10% of the world's grain exports and doubled its rice production, XAG entered the Russian market in 2021 to provide local farmers with autonomous precision farming tools.

Under the observation of Kuban State University, XAG's Russian partner DSK Supply initiated a project in Krasnodar Province to cultivate rice crops using drones from XAG. The aim of the project was to verify that rice fields can be farmed more precisely using less agrochemical with the help of XAG drones. The effectiveness of agricultural drones was tested at different growth stages including seeding, crop spraying, and fertilizer spread.

Rice is the staple crop for over half of the global population. However, conventional rice cultivation used to be labor intensive and resource-consuming. It requires a large amount of water, pesticides, and fertilizers, leading to heavy financial burden of rice farmers who pay for high operation costs. As climate change has also brought up water shortages, the production of rice is facing more challenges to meet the increasing demands.

To run the field trial, a flooded rice paddy on an area of 5.7 hectares was selected for drone applications in Russia's Krasnodar during the last farming season. With bumps, ditches and tractor tracks on the site, the pock-marked test field made it difficult to seed rice crops by hand.

The XAG Agricultural Drone, a multifunctional unmanned aerial vehicle, was equipped with the JetSeed spreader coming to the rescue of farm workers. It could fly freely over the unstable cultivated land and evenly distribute the seeds at sowing rates of 35 kg/ha and 50 kg/ha.

After the drone pilot entered the sowing parameters into the smartphone, the germinated seeds were poured into the container and the sowing began with ease. Compared to manual seeding, the XAG Agricultural Drone could navigate itself at centimeter level and significantly save operation time.

The drone was also used to spray crop protection agents for weed management at night. When the germinated seeds grew into the new rice shoots, farmers should remove weeds to prevent these invasive plants from stealing sunlight, water, and nutrients. Since the herbicides can rapidly break down through exposure to open sunlight, the XAG Agricultural Drone becomes the best option for rice farmers to make protective agents work to the full capacity.

Connecting to the RTK network, the drone with XAG's patented intelligent atomization spraying technology could allow for higher precision as well as better penetration into the bottom plant layer. According to the feedback from agronomists, this method helped to reduce chemical consumption by 30% and save water by up to 90%.

Reduce Fertilizer Use and Reap Harvest

Besides seeding and weed control, the field trial applied nitrogen fertilizer using the XAG drones to feed the rice crops and avoid excessive application. Nitrogen fertilizer such as urea plays a key role in boosting crop yields. But it also represents one of the largest sources of agricultural greenhouse gas emission, which has been taking the blame for global warming.

With the help of drones, precise and even distribution of the granules was achieved throughout the growth process from pre-sowing, germination to tillering. The rice plants responded well to fertilizers and showed positive signs of harvest after the drone spreading operations.

When the rice crops had developed large panicles in September, the Russian farmers also used the XAG Agricultural Drone for desiccant spraying. Desiccant is a substance that dries the plant on the root, which helps to ensure that all the rice crops could be harvested at the same time. Thanks to the introduction of drone, a decent result was obtained in this trial project despite the selected infertile land was initially not suitable for farming.

"The introduction of drones in agriculture is a real breakthrough in the industry," Lagvilava David, the CEO of DSK Supply said. "We have seen a trend towards precision agriculture using drones and we are fully convinced that the new rice cultivation process in Russia will give our farmers the opportunity to gain additional profitability."

Next season, it is expected that Russian farmers are going to conduct a larger experiment with new norms, new varieties of rice and new conditions. XAG and its local partners will expand the range of possibilities of autonomous drone technology to improve the resilience of agriculture.