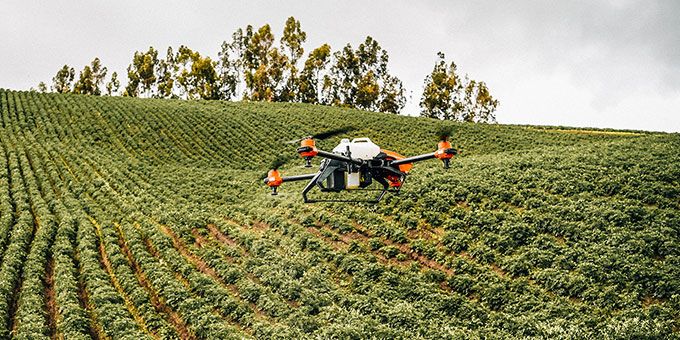 Flying into the Andes mountains of Ecuador, XAG Agricultural Drones were recently introduced to a series of on-farm spray trials for high-altitude specialty crops. The demonstrations on potato fields have presented the high potential of fully autonomous drones in reducing labour cost and agricultural pesticide exposure.

With diverse climate and rural landscapes, more than half of Ecuador is located in the Andes at sea level over 3000 meters, growing the most common crops such as corn, wheat, barley, and potatoes. The major farming steps from crop spraying to fertilising can become difficult at this altitude comparing to that on the plains.

Both smallholders and large farms are seeking high-precision drones as alternatives to manual labour and ground machinery. While rural youth have been trained as XAG drone pilots, more abandoned farmlands are being restored to fertile soils that cultivate the exotic Ecuadorian fruits and vegetables.

Since this July, XAG's local partner MegaDrone has been conducting drone spraying demonstrations for Andean potato farmers in the region of Carchi. The growing potato crops were evenly sprayed with minimal chemical by XAG Agricultural Drone equipped with four atomised nozzles and a 16L smart liquid tank. For most Ecuadorian farmers on scene, this was their first-time watching drone spray crops along the slopes of Andes.

The spray trials were held in Farm Hacienda la Ovejeria, which takes a ten-hour drive from Ecuador's capital, Quito, on the way that is featured with breathtaking blue skies, towering snow-capped mountains and a rich biodiversity. However, the inhabitants of the Ecuadorian Andes have to produce food crops in face of various challenges such as soil erosion and inaccurate pesticide application.

Traditionally, manual spraying and ground-based machinery are two main solutions to protect food crops from pests and diseases. Though large tractors can enhance the productivity of potato farms, their increasing weight and size make them hardly adapt the mountainous terrain while the huge tyres would compact the fragile mountain soil.

According to the test result, flying over the canopy from 2 meters above, the XAG Agricultural Drone could deliver droplets directly to the base of the potato plants without causing spray drift and soil compaction. As sustainable agricultural practices get highly concerned in Ecuador, Andean farmers start embracing farming drones to increase yield on the sloped Andes areas.

The Andean Highlands is home to over 4,000 varieties of potato, yet this staple food crop is susceptible to weevils and tuber moth that can ruin the potato fields. In the past, potato farmers needed to spray pesticides 14 times during a growth cycle to prevent severe yield loss caused by pest hazards. Indiscriminate spray by hand or boom spray by ground machinery can lead to an overuse of pesticides, which has contaminated soil and water of the Andean mountains.

Spraying drone can be an eco-friendly helper and makes it a less difficult task for farmers to strike a balance of efficiency and sustainability. During the potato field demo in Farm Hacienda la Ovejeria, XAG Agricultural Drone was operated by an Ecuadorian pilot to show its capacity of precision spraying. Its 30% reduction in chemical use and 90% water saving allow farmers to effectively control pests and fungal diseases with minimum environmental impact.

The farm owner, also a major potato supplier in Ecuador, has strict requirements for the quality of potato processing ingredients. It places great importance on Good Agricultural Practices to reduce yield loss and produce potatoes of high quality.

"It has been acknowledged that XAG's agricultural drone can accurately navigate itself and keep spray on the right target. Its level of automation and precision is unachievable by other agricultural equipment, which helps to phase out the farmer stereotype " said Ma Zhiqiang, CEO of Megadrone who has been spearheading XAG's technology in South America.

Another test will be arranged in October to further evaluate the spraying performance of agricultural drone before official adoption of this new technology.

According to the Ministry of Agriculture and Livestock of Ecuador, a project financing of 5 million Euro has been implemented with FAO in the country to introduce technical assistance for the preservation of the Andean Landscapes. The agile agricultural drone would be a powerful tool to promote sustainable farming in Ecuador's 3.2 million hectares of cultivable soil.