Light has a complex relationship with plants. When the light touches a leaf, it can be absorbed by, reflected from, or transmitted through to other leaves. Plants appear green to us because they reflect and transmit slightly more green light than they do blue or red. 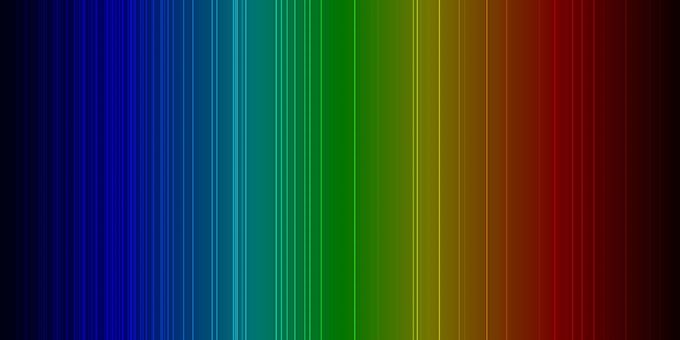 The Absorption and Action Spectrum and the Benefits of Green Light

From the beginning, Heliospectra has always included green light in grow lights. This decision was made based on the light used by plants.

Light has a complex relationship with plants. When the light touches a leaf, it can be absorbed by, reflected from, or transmitted through to other leaves. Plants appear green to us because they reflect and transmit slightly more green light than they do blue or red, and the human eye is more sensitive to green light. The higher transmission and reflection of green light by plants also means that green can better penetrate the plant canopy and reach lower leaves.

There is much discussion about light colors and whether green light should be included in the spectra applied to crops. To address this, the roles of the light absorption spectrum, the light action spectrum, and how they relate to photosynthesis need to be understood. Before we go into more detail, let’s start by defining the absorption and action spectra:

Absorption Spectrum: Describes the wavelengths that are absorbed or the light that is harvested.

The light absorption spectrum defines the range of electromagnetic radiation plants absorb. This depends on the cellular and molecular make-up of the plant and therefore differs depending on species.

So, which regions of the spectrum do plants absorb? This is different for extracted chlorophyll molecules, whole chloroplasts (where the chlorophyll resides), and plant leaves. To complicate matters, the solvent in which chlorophyll is extracted also affects the absorption spectrum.

Since the absorption spectra of chlorophyll a and b extracts have been found to lie in the blue and red regions, some LED grow light companies, at least previously, claimed that living plants do not use green light. But relying on the absorption spectra of isolated pigments, as opposed to living plants, is not a very sound foundation for LED selection. Carotenoids (accessory pigments) also play a role in light absorption and energy transfer to the photosystems, and they absorb light in the blue and green regions. In fact, in living systems, pigments never exist alone, and each pigment has a specific absorption spectrum. Additionally, pigments are always bound to proteins, which shifts their absorption spectrum. This phenomenon explains why wavebands, rather than a single wavelength, are absorbed. 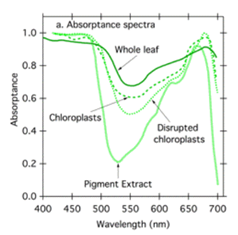 The above figure* from Dr. Holly L. Gorton’s Biological Action Spectra, 2010, and modified from Moss & Loomis, 1952, shows the light absorption spectra of isolated pigments, disrupted chloroplasts, intact chloroplasts, and whole leaves from spinach (Spinacia oleracea), a plant leaf in which all of the pigments remain bound to their specific proteins. While it shows there is very little absorption of green light (500-600 nm) in extracted chlorophyll molecules, as the integrity of the leaf increases to the whole leaf, we see more and more absorption in the green region. In this case, approximately 70% of the green light is absorbed.

The action spectrum is the electromagnetic radiation, or light, that plants use for photosynthesis and the subsequent photochemical and biochemical reactions critical to plant growth.

In 1972, KJ McCree published an influential paper describing the different action spectra for 22 plant species. This work was originally done to provide an accurate definition of PAR. Interestingly, similar action spectra were observed for all 22 species, with slight variations in the blue end of the spectrum. McCree found that all wavelengths within the 400-700 nm region were used in photosynthesis. This region includes red, blue, and green light. There is ongoing discussion that PAR extends a bit beyond 700 nm, reaching into far-red light. 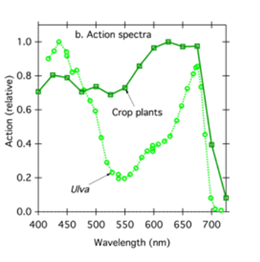 The above figure* from Dr. Gorton’s Biological Action Spectra shows the action spectra for higher plants (crop plants) and a green alga (Ulva). The curve for the crop plants represents the average action spectrum obtained for McCree’s 22 crop plants, recalculated on a photon basis. It shows that, on average, over 70% of the green light was used in photosynthesis. Crop plants have been bred for uniformity and thus have similar action spectra, and green light is shown to be necessary for their growth. So in conclusion, for photosynthesis, the most effective and efficient light is in the red region (600-700 nm), followed by the blue (400-500 nm) and then the green (500-600 nm). These blue, green, and red wavelengths (400-700 nm), are all recognized as photosynthetically active and are used by plants.

Greenlight is a player in photosynthesis, along with the other portions of the spectrum. Greenlight is transmitted through a plant’s organs and is utilized in deeper layers of cells. It is also used in the intra-canopy leaves, which is important in dense-canopy production. In fact, the photosynthetic efficiency of green light is similar to that of red light and greater than that of blue light in the deeper layers of a leaf.

Overall, plants grown under a full spectrum that includes green light tend to have thicker leaves and higher net photosynthesis. Greenlight has shown to have a positive effect on yield, particularly on fruiting crops with a long lifecycle and a multilayer canopy structure, such as tomatoes. While green LEDs have historically been less efficient at converting electricity into photons than blue or red ones, much more efficient white LEDs have been successfully used to add green light into the spectrum of grow lights.

The benefit of intelligent LED grow lights is that they produce light at specific wavelengths chosen to match the needs of plants. So instead of converting electricity into a broad-spectrum light source, such as an HPS lamp, LED grow lights put the energy into the wavelengths that matter most for driving photosynthesis. This leads to lower energy consumption, healthier plants, and improved yields for the grower. A targeted light spectrum also enables growers to control plant color, flavor, appearance, and morphology, such as reducing branching, increasing leaf thickness, speeding up flowering, and obtaining overall better plant vigor.

Would you like to see how the entire spectrum can be manipulated to produce the light your plants want and the crop quality you need? Download our handy and informative light spectrum infographic.