By removing LED drivers from individual light fixtures, the new MegaDrive™ eliminates the need for electrical power connections throughout the greenhouse or grow room while significantly reducing up-front costs. 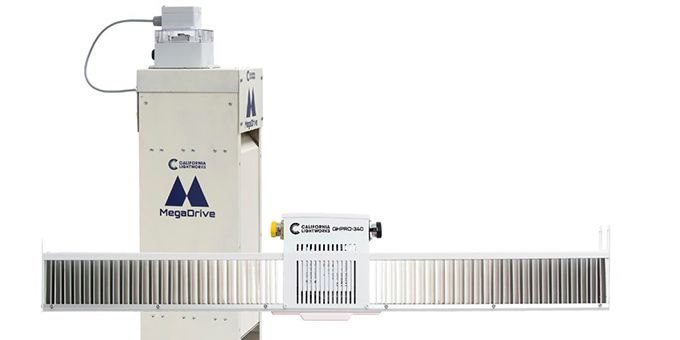 As the indoor and greenhouse horticulture industries mature, lowering operating costs is becoming essential to ensuring profitability.  LED technology can significantly reduce operating costs through high efficiency, long fixture life and sunlight balancing.  However, LED technology adoption in the horticulture industry has been slow due to high up-front and installation costs.

The new MegaDrive™ system consists of a large central power unit connected to a series of up to 30 LED fixtures in a chain. High voltage three phase power can connect directly to the central power unit, eliminating power drops to each fixture.  In addition, all the lights can be centrally controlled from the power unit. The result is up to 80% less installation cost and 30% less up-front fixture cost.

"Using the MegaDrive™ to replace our outdated HPS systems, we were able to double our canopy space by going from a single level to two levels with almost no increase in power and heat," said Wesley Williams, Vice President of Operations at Exotics Cultivation in Lompoc, California.  "We completed the whole installation in half a day with no additional electrical work. The plant response to these new lights has been incredible, far exceeding any other LED lights we tested.  We look forward to converting our entire facility to the new MegaDrive™ system."

"The key to our success has been relentless innovation," said George Mekhtarian, CEO of California LightWorks. "Having R&D and manufacturing stateside allows us to deliver breakthrough lighting technology faster than any of our competitors.  The new MegaDrive™ is yet another example of our commitment to maintaining our lead in this industry."

The new MegaDrive™ patented lighting system is currently available exclusively from California LightWorks for both indoor and greenhouse applications.  The system is UL listed, made in California and carries a five-year warranty.