With the number of bee colonies drastically declining around the world, SAS is using technology such as the Internet of Things (IoT), machine learning and visual analytics to help maintain and support healthy bee populations. 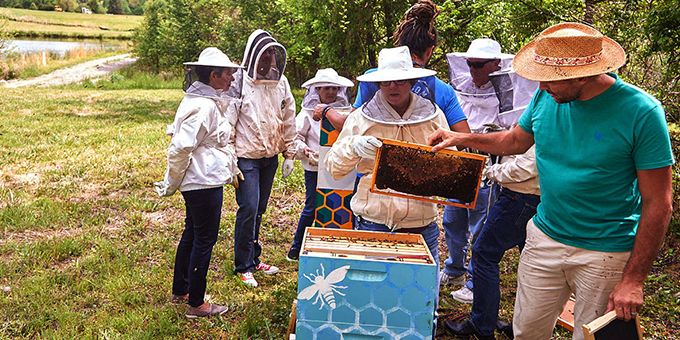 As part of its commitment to using data and analytics to solve the world's most pressing problems, SAS' recent work includes helping to save the world's No. 1 food crop pollinator – the honey bee. With the number of bee colonies drastically declining around the world, SAS is using technology such as the Internet of Things (IoT), machine learning and visual analytics to help maintain and support healthy bee populations.

In honor of World Bee Day, SAS is highlighting three separate projects where technology is monitoring, tracking and improving pollinator populations around the globe. First, researchers at SAS have developed a noninvasive way to monitor real-time conditions of beehives through auditory data and machine learning algorithms. SAS is also working with Appalachian State University on the World Bee Count to visualize world bee population data and understand the best ways to save them. Lastly, recent SAS® Viya® Hackathon winners decoded bee communication through machine learning in order to maximize their food access and boost human food supplies.

"SAS has always looked for ways to use technology for a better world," said Oliver Schabenberger, COO and CTO of SAS. "By applying advanced analytics and artificial intelligence to beehive health, we have a better shot as a society to secure this critically important part of our ecosystem and, ultimately, our food supply."

Researchers from the SAS IoT Division are developing a bioacoustic monitoring system to noninvasively track real-time conditions of beehives using digital signal processing tools and machine learning algorithms available in SAS Event Stream Processing and SAS Viya software. This system helps beekeepers better understand and predict hive problems which could lead to colony failure, including the emergence of new queens – something they would not ordinarily be able to detect.

Annual loss rates of US beehives exceed 40%, and between 25% and 40% of these losses are due to queen failure. Acoustic analysis can alert beekeepers to queen disappearances immediately, which is vitally important to significantly reducing colony loss rates. With this system, beekeepers will have a deeper understanding of their hives without having to conduct time-consuming and disruptive manual inspections.

"As a beekeeper myself, I know the magnitude of bees' impact on our ecosystem, and I'm inspired to find innovative ways to raise healthier bees to benefit us all," said Anya McGuirk, Distinguished Research Statistician Developer in the IoT division at SAS. "And as a SAS employee, I'm proud to have conducted this experiment with SAS software at our very own campus beehives, demonstrating both the power of our analytical capabilities and our commitment to innovation and sustainability."

By connecting sensors to SAS' four Bee Downtown hives at its headquarters in Cary, NC, the team started streaming hive data directly to the cloud to continuously measure data points in and around the hive, including weight, temperature, humidity, flight activity and acoustics. In-stream machine learning models were used to "listen" to the hive sounds, which can indicate health, stress levels, swarming activities and the status of the queen bee. To ensure only the hum of the hive was being used to determine bees' health and happiness, researchers used robust principal component analysis (RPCA), a machine learning technique, to separate extraneous or irrelevant noises from the inventory of sounds collected by hive microphones.

The researchers found that with RPCA capabilities, they could detect worker bees "piping" at the same frequency range at which a virgin queen pipes after a swarm, likely to assess whether a queen was present. The researchers then designed an automated pipeline to detect either queen piping following a swarm or worker piping that occurs when the colony is queenless. This is greatly beneficial to beekeepers, warning them that a new queen may be emerging and giving them the opportunity to intervene before significant loss occurs.

The researchers plan to implement the acoustic streaming system very soon and are continuing to look for ways to broaden the usage of technology to help honey bees – and ultimately humankind.

Visualizing the world's pollinator populations
Today on World Bee Day, SAS is launching a data visualization that maps out bees "counted" around the globe for the World Bee Count, an initiative co-founded by the Center for Analytics Research and Education (CARE) at Appalachian State University. The goal of a World Bee Count is to engage citizens across the world to take pictures of bees as a first step toward understanding the reasons for their alarming decline.

"The World Bee Count allows us to crowdsource bee data to both visualize our planet's bee population and create one of the largest, most informative data sets about bees to date," said Joseph Cazier, Professor and Executive Director at Appalachian State University's CARE. "SAS' data visualization will show the crowdsourced location of bees and other pollinators. In a later phase of the project, researchers can overlay key data points like crop yield, precipitation and other contributing factors of bee health, gathering a more comprehensive understanding of our world's pollinators." Bayer has agreed to help sponsor CARE to allow its students and faculty to perform research on the World Bee Count data and other digital pollinator data sources.

In early May, the World Bee Count app was launched for users – both beekeepers and the general public, aka "citizen data scientists" – to add data points to the Global Pollinator Map. Within the app, beekeepers can enter the number of hives they have, and any user can submit pictures of pollinators from their camera roll or through the in-app camera. Through SAS Visual Analytics, SAS has created a visualization map to display the images users submit via the app. In addition to showing the results of the project, the visualizations can potentially provide insights about the conditions that lead to the healthiest bee populations.

In future stages of this project, the robust data set created from the app could help groups like universities and research institutes better strategize ways to save these vital creatures.

Bees are responsible for pollinating nearly 75% of all plant species directly used for human food, but the number of bee colonies are declining, which will lead to a devastating loss for human food supply. A main reason for the decline of bee populations is a lack of access to food due to an increase in monoculture farming. When bees do find a good food source, they come back to the hive to communicate its exact location through a "waggle dance." By observing these dances, beekeepers can better understand where their bees are getting food and then consider establishing new hives in these locations to help maintain strong colonies.

"Observing all of these dances manually is virtually impossible, but by using video footage from inside the hives and training machine learning algorithms to decode the dance, we will be able to better understand where bees are finding food," said Kjetil Kalager, lead of the Amesto NextBridge and Beefutures team. "We implemented this information, along with hive coordinates, sun angle, time of day and agriculture around the hives into an interactive map in SAS Viya and then beekeepers can easily decode this hive information and relocate to better suited environments if necessary."

This systematic real-time monitoring of waggle dances allows bees to act as sensors for their ecosystems. Further research utilizing this technology may uncover other information bees communicate through dance that could help us save and protect their population, which ultimately benefits us all.