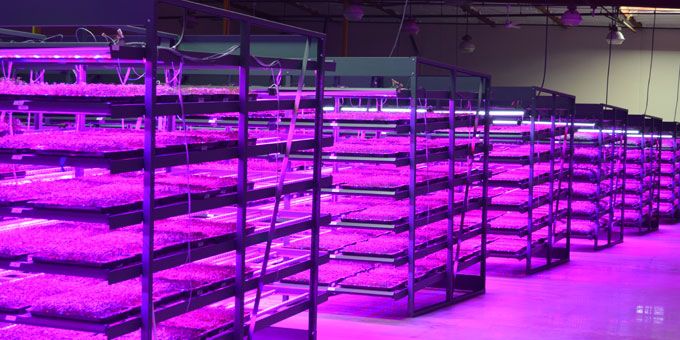 LEDs Have a Growing Impact in Urban Farming

But filling this order is not easy. Large metropolitan areas are only getting larger and this means that fresh fruits and vegetables must be brought in from ever greater distances. This adds cost pressure to the supply chain and, obviously, affects quality as well. Leafy greens and other superfoods lose flavor when trucked from afar—and they get a lot less super. Some fruits and vegetables lose as much as 50% of their vitamin C and other nutrients after a week of refrigeration.

One place making great strides in urban farming is Singapore. The bustling island nation of 6 million people has very little open space for agriculture—Singapore currently imports over 90% of its food—so it is encouraging urban farms to grow. One is the ComCrop project, which is reinvigorating marginalized spaces and harvesting high-quality, pesticide-free produce on rooftops.

Another is Sky Greens, the world’s first low-carbon, hydraulic-driven vertical farming system. It consists of rotating tiers of growing troughs mounted on an aluminum frame up to four stories high. The troughs use soil or hydroponics and rotate to ensure plants get steady light, irrigation and nutrients. Sky Greens farms can produce as much as 10 times more yield per unit land area than traditional monolayer farms.

These are just two of the many urban farms around the world that are showing the way to more intelligent use of space, light and logistics to feed our increasingly urban population. Urban and vertical farms are doing it, in part, with LED lighting for horticultural applications. FarmEcology, a vertical farm near San Francisco, California, uses more than 50,000 Osram LEDs in two different wavelengths to produce the highest quality microgreens available - 660 nanometers (nm) Hyper Red and 450 nm Deep Blue.

LED technology brings a lot of benefits to urban farming, primarily lower energy consumption and improved production. Urban farmers recognize these benefits and, with innovation and determination, they’re setting up LED-powered urban farms to ensure that city residents have reliable access to ultra-fresh produce that travels a very short distance from the plot to the plate.

Urban farms on rooftops are using the sun along with supplemental LED lighting. Some underground farms are successfully growing produce relying exclusively on LED lighting. In fact, with constant temperatures and always-on lighting, they’re harvest year-round. Pesticides are not needed because insects are very rare in these environments.

Urban farms are not a new phenomenon but LEDs have the power to take it further than ever. Until recently, horticultural lighting consisted mainly of high-pressure sodium (HPS) lamps. These HPS lamps do produce over 130 lm/W—but this is spread over a broad spectral range, which is not always optimal for plant growth.

The high-power consumption and heat radiated by HPS lamps also require that the lamps be placed a significant distance from the plants, which means they’re only suitable for top-lighting systems in greenhouses. Additionally, due to the heat generated by HPS lamps, plants must be watered more often, which can be a drain on dollars and natural resources. Another drawback of HPS lamps is their short lifespan of only 8,000 hours, which can increase the cost of urban farming.

In fact, urban farming installations that use LED technology can realize 40% energy savings compared to traditional lighting methods like HPS lamps. And here’s another significant benefit. Due to the optimized light spectrum at 450, 660 and 730 nm, LED-based luminaires are able to provide the perfect lighting for all types of plants, allowing growers to adjust the lighting exactly to the needs of various crops.

Different varieties of plants achieve optimum growth when given spectral power distribution that is tailored to their specific needs. The right distribution mix—paired with the intermittent addition of certain wavelengths adjusted specifically to the individual needs of the plant—can trigger plant growth, as well as influence shape, color, yield and time to harvest. Their capacity for color-spectrum definition and their control flexibility are two more assets that make LED lights very well suited to urban farming.

LED lighting, deployed wisely and widely, can play a role in ramping up food production around the world. The more LEDs that are in use in urban farms around the globe, the more major metropolitan centers can restructure their food systems to make supplies of fresh food cheaper, tastier and more plentiful.

Marc Dyble is the General Lighting Product Marketing Manager at Osram Opto Semiconductors in North America, where he promotes the use of LEDs in horticulture applications to enable fresh and better tasting food. He received his Masters of Science degree in Lighting from Rensselaer Polytechnic Institute.