In a nutshell, by bringing artificial intelligence and around-the-clock activity, the robots will help optimize the yield of the farms far beyond what could humanly be possible. Maximizing the production while minimizing the costs in energy, water, time. 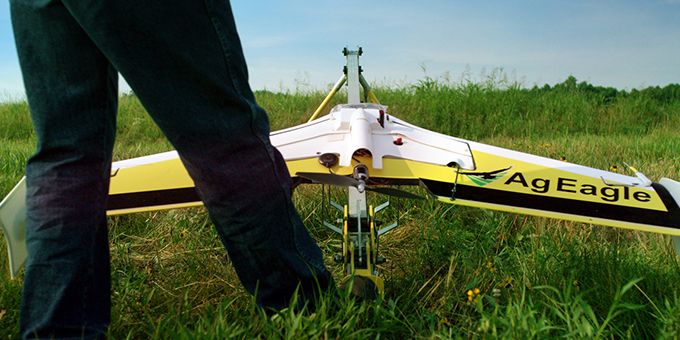 AgBots: The Fourth Agricultural Revolution, Ready to Take Over Farms

Every single day we are reminded of the fact that the ‘Robotic Revolution’ is moving forward at a rate faster than expected. From self-driving vehicles to automated cashier, robots are slowly making their place in our daily lives. And while we are more focused on robots in manufacturing industries, there's one crucial area they might be disrupted even more than anything else, i.e. the use of robotics in agricultural activities. So, the one question that we need to ask ourselves is, are we ready for the ‘Ag-Bots’?

‘Necessity is the mother of invention’. This phrase is most appropriate when it is indicating the comprehensive advancements made in agriculture technology. The technological advancements in agricultural robotics ranging from drones to self-directed tractors to robotic arms. The basic intention behind bringing in such a drastic change in a much traditional activity like agriculture was the need to cater to the significantly escalating population around the globe. According to the estimate given by the UN, world population is anticipated to grow up to 9.7 billion in 2050. Resultant, this level of population would need a lot more food, and the farmers, using the traditional agricultural practices, will face extreme pressure to keep up with this demand.

Another important concern was shortage of skilled and semi-skilled labor in agriculture. It is hard to find people who will take on farm work, especially, when the work is hazardous, has tough physical demands and long hours in the sun. It becomes difficult and unpleasant, making it tough to draw the interests of workers even when farmers offer much more than expected. This scenario is proven by the fact that in 1900, 14.3% of the US population worked on farm, which is much more than the figures in 2017. In 2017, less than 2% of the US population worked on farms, according to Our World in Data, an organization that monitors farm and land use. Hence, AgBots definitely open up new opportunities for auxiliary jobs like development and maintenance of robots, drones, software, and more.

Agricultural robots help in automating repetitive and dull tasks for farmers, letting them focus more on improving overall production yields. The most common applications of Agricultural Robots are in:

Harvesting and picking is one of the most prevalent robotic applications in agriculture. This is because of the precision and speed that robots can achieve to improve yield size and reduce wastage. There are even robots or drones that can precisely remove weeds or shoots them with a targeted spritz of pesticides, using 90% less chemicals than conventional blanket sprayer. For Organic Farming, they could just zap the weed with a laser instead. The UN estimates that between 20-40% crops are destroyed by pests and disease. To counter this problem, mounted sensors and cameras are used to monitor crops on their growth and alert farmers on their smartphones, in case of troubleshooting or to notify about the best time to harvest. Companies like AgriBotix have already commercialized that analyzes drone captured infrared images to spot unhealthy vegetation. The farmer is alerted on his device when the troubled area is identified. From financial bonuses to green farming, many benefits are arising from the development of agricultural robots which are indeed the future of farming.

The challenges are significant but so is the opportunity: A broader and better variety of foods, wider availability, comparatively less expensive and a better fed. The world of agriculture has come a long way from the horse and plough to today’s AgBots and will continue to grow even further in the coming years. In a nutshell, by bringing artificial intelligence and around-the-clock activity, the robots will help optimize the yield of the farms far beyond what could humanly be possible. Maximizing the production while minimizing the costs in energy, water, time. This is what tomorrow will be made of.

Posted by Rohan Patil on 03/12/19, 02:37 AM
North America is contributing the largest revenue share in the agriculture robots market, owing to the high presence of vendors for agriculture robots such as Harvest Automation, Inc., Clearpath Robotics, and PrecisionHawk, Inc.