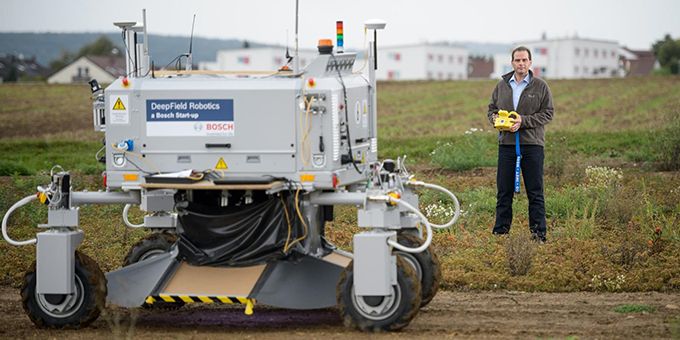 Both the Government and farmers agree that robots will play an important part in farming in the future. Robots are not just for manufacturing, they will disrupt the entire farming industry. Manual pickers just might be on the way out.

Presently, we see a majority of robots on farms being used for milking cows. In my article last month, I covered automated tractors, drones and other autonomous vehicles. We already have advanced prototypes for feeder robots, surveyance, and weeding. Fully automated farms are just around the corner.

A new robot from Bosch can travel through crop fields, learn what weeds look like, and crush them. Their BoniRob has a device about 0.4 inches wide that can stamp small weeds down. For larger weeds, it just stamps a few extra times, killing almost two weeds a second.

The robot is about the size of a small car, and makes use of the same kind of laser-radar vision system self-driving cars use to navigate. BoniRob is programmed by storing pictures of leaves from the plants that farmers want to harvest and weeds. Using machine learning (AI), it makes decisions based on what it sees, stamping down only on the weeds it’s been asked to kill. BoniRob has the potential to rid farms of herbicides or other weed killers on crops, which are harmful to humans.

One robot is designed to harvest sweet peppers. The robot first grasps on to the sweet pepper with a suction cup and then employs a small saw to cut the pepper from the bush. 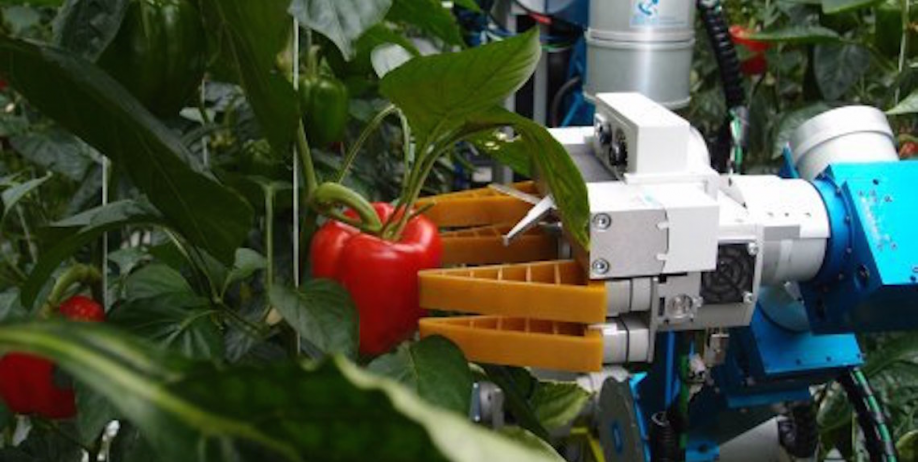 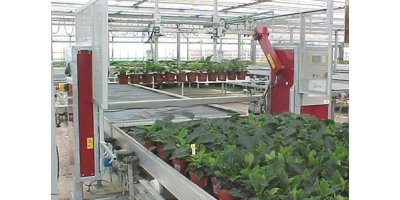 Robots can harvest tomatoes, aiming to increase productivity and improve operations. These tomatoes are grown in greenhouses so that the tomatoes are unaffected by changes in the external environment. Because of this, productivity is increased by using computer control for the house's interior temperature, humidity, light, sprinkling, fertilizer, and carbon dioxide concentration. Along with this, advanced harvesting robots are also actively introduced to pick the tomatoes. 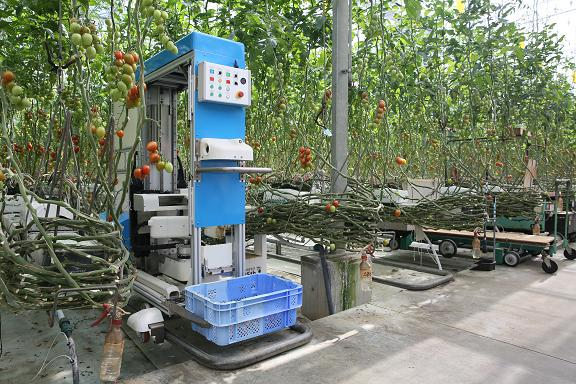 It is an advantage that the robots can work at night while the workers are sleeping. In the morning, the workers only have to package the tomatoes that have been harvested by the robot.

A tomato harvesting robot moves along a rail that is laid between the tomato seedling rows to harvest the tomatoes. The robot is equipped with a camera that has an image recognition function. The camera locates the tomatoes and AI determines whether they should be harvested or not.

The robot decides the route for the operation and brings an end-effector close to the tomato for harvesting. It then passes the targeted tomato through a ring, and pulls on the tomato. By pressing the primary limb, the tomato is picked as if it were being picked by a hand, and the tomato is dropped into a receptacle below.

An army of small autonomous robots are invading the cotton fields. They are called swarm bots and they promise to revolutionize the way cotton is harvested. An autonomous swarm bot could cover 11 acres a day and go through the field 25-30 times in a season. So, a swarm of these robots descending on a field can make quick work of it over a couple of days. There’s an average 60 to 80-day window when the boll is exposed to the elements. If a farmer can harvest within a day or two, the quality will be optimal. 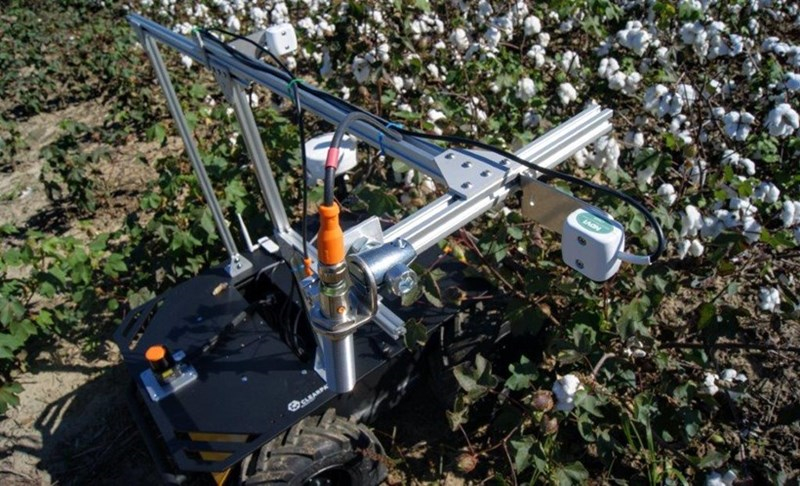 Apple orchard farmers will be able to use robots instead of seasonal pickers using a robot with a vacuum to pick apples from the tree.  The robot uses computer vision algorithms to identify and locate apples in the tree. Apples necessitate attention during harvesting. The apple picking robot is constructed to work with precision in harvesting and storing the apples. The apples are collected through a flexible hose and stored in the same big boxes as used by human pickers. 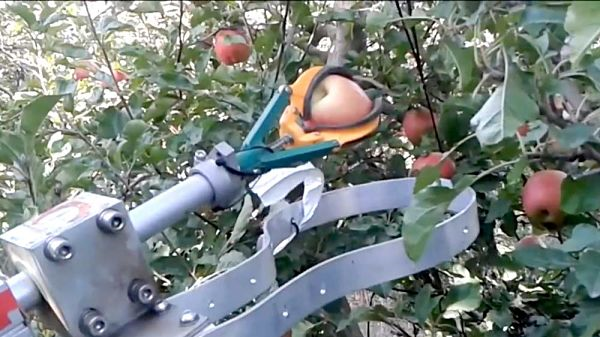 Robots are being utilized for efficient, flexible and scalable pallet loading. Layer forming robots allow for speedy pallet changeovers, soft product handling and nominal maintenance. There are palletizers that are very flexible and can handle a wide range of products and packaging formats with minor changeovers between products and configurations. These pallet systems contain integrated, layer-forming robots that precisely position each case of produce into its correct position. The robots can softly complete virtually any pallet pattern with no mechanical changeovers. They have the ability to work multiple lines simultaneously, are instinctual to use, and feed accurate data back to the warehouse control system. 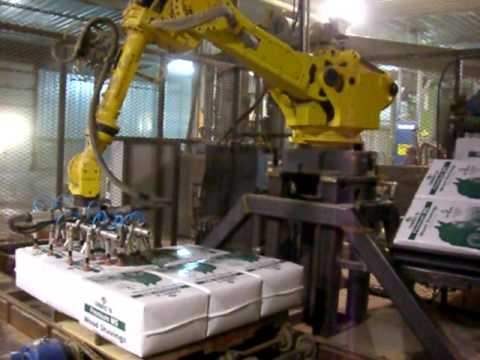 There are autonomous robots that will easily assess a tree’s structure for dormant pruning, which will save on labor costs. Pruning accounts for about 20% to 25% of a growers’ labor costs. Most growers depend on migrant labor to perform the task of pruning. However, growers are even now struggling to secure migrant labor.

Many growers will comment that pruning tall spindle apple trees is a science. Computing systems must to know precisely what to cut and where. The main and central need is to remove the limbs from the spindle that are too big. A renewal cut is created to encourage a new, smaller branch to regenerate.

Two cameras operating as sensors are installed on a robotic arm that scan the tall spindle trees. The robotic arm moves around reviewing many images from different positions, and those images are viewed to estimate the tree shape, where the branches are and what their diameters are. 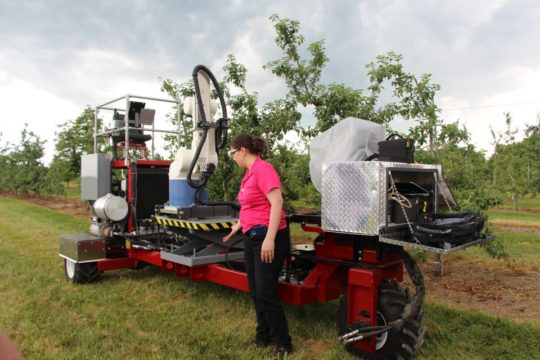 The farm labor supply in California's largest agricultural region, the San Joaquin Valley, is the tightest that the region has seen in a decade. The state's $45 billion agriculture industry supplies about half of the nation's fresh fruits, vegetables and nuts.

The farm labor force is composed of mostly immigrants, many of which are not documented. The number of farm workers has gradually declined to a crisis point. It is imperative that farmers look to employ robots if they expect to meet the demand for their product.