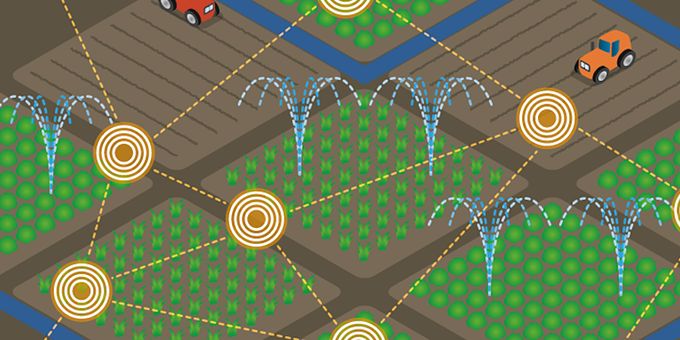 Artificial Intelligence And Its Uses In Ag Irrigation

It would be hard to have missed the recent hype surrounding the promise artificial intelligence (AI) holds for agriculture. AI refers to the application of computers to perform tasks that normally require human intelligence.  The irrigation space, like agriculture as a whole, is fertile ground for the application of AI to solve real-world problems. The key to realizing this potential, however, is data – and lots of it. For this reason, you may also have heard the term Internet of Things, or IoT,  in the context of AI. IoT refers to the universe of sensors and devices that leverage our modern communications infrastructure to collect and exchange data.

There is an abundance of ways in which IoT devices and AI could potentially be applied to benefit irrigation. One of the most frequently touted applications is for improved irrigation scheduling and efficiency. While soil moisture data (from either sensors or models) have long been used as a scheduling aid, AI offers the potential for machine learning of how soil moisture responds to irrigation events in scenarios with different crops, soils, environmental conditions, etc. When tied to an irrigation control system, this information can automatically implement control strategies that help minimize water usage, manage nutrient losses, or achieve more desirable or uniform soil moisture throughout the field. Similarly, AI could be applied to learn the associations between available weather, crop and soil condition data, and the corresponding irrigation recommendations of a trained agronomist, thereby automating the repetitive aspects of the scheduling process.

As another example, AI can be used to determine how environmental factors influence the crops being irrigated. Figure 1 depicts the nature of the relationship between air temperatures, soil moisture, and the daily growth of corn. This relationship was determined by applying AI to corn test plot data, along with the weather and soil conditions experienced in those test plots. The AI-based algorithm was not only able to quantify how air temperature drives corn growth, but also revealed how corn growth slows under dry conditions during warm temperatures. This type of understanding of crops can foster the development of more efficient or productive management practices, including irrigation.

Figure 1: A visualization of the impacts of air temperature and soil moisture on corn growth as determined using AI. Values near 0 (purple and blue dots) indicate dry conditions, while values nearer to 1 (green and yellow dots) indicate more adequate soil moisture. Of particular note is the revealed impact of dry soils on slowing corn growth on days with warm temperatures.

AI can be used to simulate other real-world problems too. It can be particularly useful for problems where the underlying physical processes are poorly understood, or difficult to simulate with more traditional models. For example, canopy wetness can be very difficult to diagnose and predict based on scientific principles alone. However, an AI-based model can learn the associations between observed canopy wetness (from sensor data, for instance) and the factors that influence it. Once these associations have been learned, they can be applied to diagnose and predict canopy wetness in other locations and times.

Taking to the Sky

In yet another example, AI could be used to automate the analysis of aerial imagery of a field. This might include diagnosing areas of crop stress due to moisture, disease, etc. AI can further identify the relationships between observed crop stress and sensor- or model-based soil moisture data. This allows such data to be used to more proactively manage irrigation activities to prevent crop stress, rather than waiting for stress to become apparent. Similarly, AI can be applied to images from a digital camera, enabling a simple cell phone or tablet to become a pocket agronomist of sorts. Smartphone-based apps that apply AI to identify insects, weeds, and diseases, by simply pointing the camera at the item of interest, are already available.

In many ways, the sky’s the limit in terms of how AI could be applied for the betterment of irrigation. However, it will take time, and loads of data, to realize this potential. Do you have a problem that AI might be able to solve? If so, have you started collecting the data that might be needed? The sooner you get started, the sooner you might be able to see the benefits.