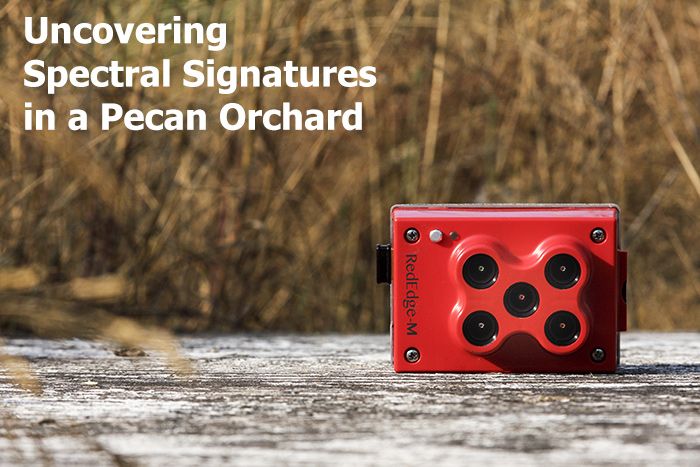 “We just identified several areas of stressed vegetation above pecan orchards we scanned in Southern New New Mexico. We sent some experts, from the local University, in to identify the source of the stress and they believe it was caused by a zinc deficiency. Do you think it would be possible to take a look at the data in those areas and see if you could find a unique signature that might enable later detection of a similar deficiency?”

In October 2017, Brazito Orchard Services, an agricultural service provider based in Mesilla Park, New Mexico, was contracted to fly a 3DR Solo equipped with a MicaSense RedEdge over a pecan orchard in Southern New Mexico. After analyzing the imagery, Brazito staff identified multiple areas of stressed vegetation (using the Color Infrared layer).

Guided by the imagery, Brazito sent a group of experts from New Mexico State University to walk the field and determine the cause. Through leaf and soil sampling, the team confirmed that the stressed areas were suffering from zinc deficiency. With this diagnosis in hand, Brazito contacted the MicaSense support team to see if it was possible to identify the spectral signature of the zinc deficiency in pecans, in order to use it to enable future detection.

However, before delving into Brazito’s question, its helpful to establish some context on how multispectral sensors, spectral signatures, and plant deficiencies overlap.

Plants, like any other object, reflect back a portion of the light transmitted by the sun. The light reflected is known as a spectral signature, and its intensity is indicative of the health of the plant.

As noted in the figure above, the intensity of light reflected within the visible wavebands is controlled by leaf pigments such as chlorophyll. The intensity of light reflected in the near-infrared band is mainly controlled by leaf cellular structure. In general, a stressed plant will have a higher reflectance in the visible wavebands and lower reflectance in the near-infrared band (when compared to a healthy plant).

While plants may respond to some stressors differently, they typically react in a similar way: they decrease chlorophyll and produce lower quality foliage. Therefore, water stress, heat stress, or nutrient stress may produce similar symptoms. This means that oftentimes the spectral signature of stressed plants will look the same regardless of the cause.

Multispectral cameras like RedEdge are designed to detect symptoms (low chlorophyll content, less foliage) based on the amount of light reflected in the different bands, but don’t necessarily pinpoint the cause behind the symptoms. Thus, to obtain a precise diagnosis, it is important to correlate multispectral imagery with other analysis and samples.

Multispectral cameras capture spectral signatures much like a thermometer measures the temperature of the human body: a high temperature can indicate illness, but not the cause behind it. Similarly, changes in plant reflectance indicate stress, but additional information is required to identify the cause.

Rather than relying solely on spectral signatures, Brazito made a sound choice by bringing in a group of experts to scout and take samples, allowing the imagery to guide their efforts.

About Brazito Orchard Services
Founded in 1983, Brazito Orchard Services is a custom pecan cleaning and fertilizer application company in in Mesilla Park, New Mexico. When asked about their experience, Jason said, “The lack of a signature really didn’t change anything. Identifying unhealthy foliage at a macro scale is still a significant gain. We honestly didn’t hold out high hopes for a specific signature but we figured it was worth the conversation with MicaSense experts and we’ve learned a lot.”

With a better understanding of the benefits and limitations of multispectral imagery, Byrd Farms and Brazito Orchard Services are now excited to see what additional quantitative information can be uncovered using RedEdge. “We’re very pleased with the sensor so far. We’re going to attempt to offer new services this year. We can use the RedEdge to help tailor fertilizer applications and pinpoint unhealthy trees by using it to queue direct leaf samples.”