As the owner of ForeFront Ag Solutions, an independent crop consulting business located in Indiana, Erich Eller specializes in agronomy and precision agriculture. For the past two years he has incorporated drones into his business. He flies an AgEagle drone, and uses Botlink software to analyze the images he captures.

Erich has consulted a 56-acre field for the past few years, with corn being planted this most recent season. The field has experienced some difficulty, as a number of areas were troubled with drowned-out spots due to heavy rainfall. Another issue is that several different soil types are found on the field, ranging from finer texturers made of clay to coarser soil composed of silt and sand.

Within this field, Erich and his client performed a nitrogen trial. They plotted 16 rows running north and south with varying levels of nitrogen sprayed on each row. Different types of soil were used within the rows as well. Erich was aware of the issues in the field, but he was looking to determine effective and efficient nitrogen levels to spray. He also wanted to see if his NDVI (Normalized Difference Vegetation Index) maps would truly align with the field’s yield map.

Erich flies this particular field 4-6 times each growing season. He estimates it takes about 30-45 minutes to fly the field, which includes setup and takedown of the AgEagle launcher. The most time-consuming part for him is driving to and from the field. After the flight, he returns to his office and uploads the raw images to his Botlink account to be stitched together. He estimates this takes about 10-15 minutes, although he usually uploads multiple fields at once.

After receiving his processed map from Botlink, Erich takes the data and uploads it into his own software for analysis. This information allows him to plot points of interest shown on the NDVI map, make calculations, and then travel to the exact points. From there, he will scout on foot, focusing on the areas displayed on the map.

Erich believes it is crucial to have someone on the ground, but this time has decreased immensely with the use of drones. Plus, he finds that relying solely on ground scouting can cause you to miss crucial signs in your field. For instance, on August 10, the corn was about 10-12 feet tall. From that vantage point, he would have been able to only see a small segment of the field as he wandered through it. Since turning to aerial scouting, he has discovered that efficiency and success rate has increased dramatically compared to travelling on foot.

Erich received a stitched NDVI map from Botlink. From this map he received useful and reassuring information. He was able to confirm that his suspicions of drowned-out areas and predictions for crop yields in areas of the fields were correct. 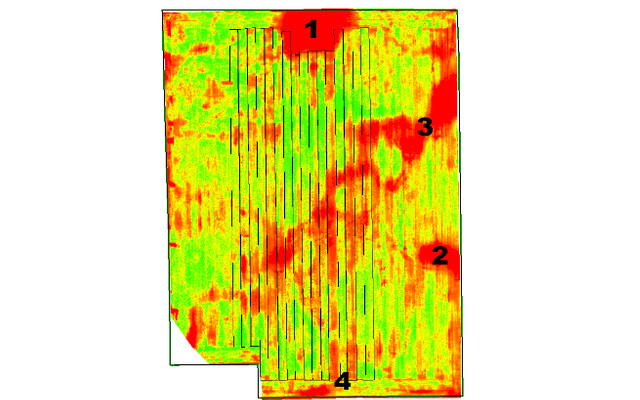 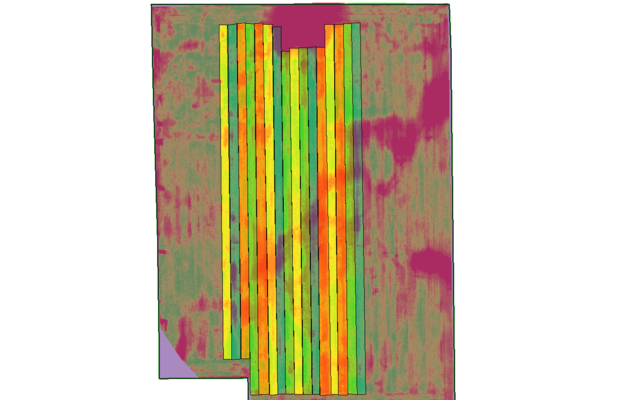 To further analyze the data, the transparency of the field map was altered to better visualize the levels of nitrogen placed in each row: 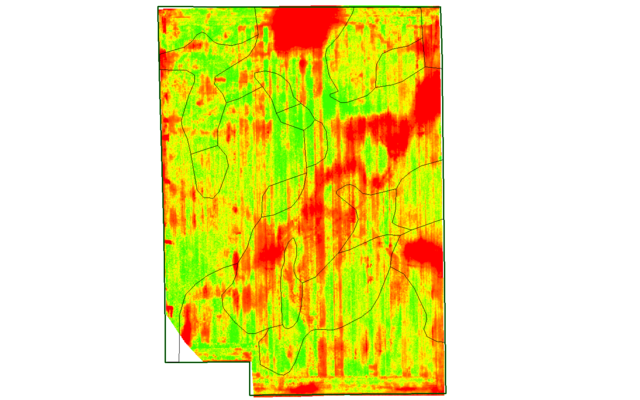 This image depicts the same field, but this time with its soil types outlined. 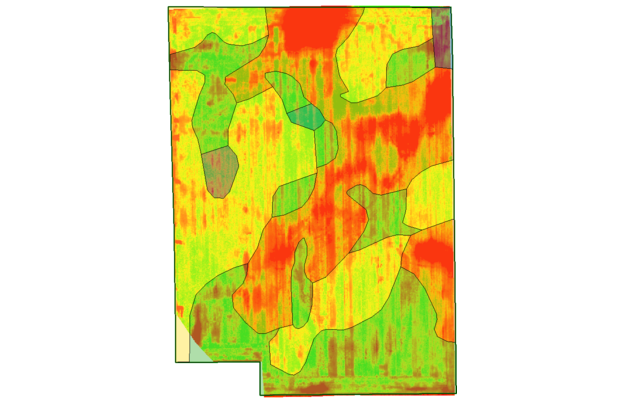 Following the above image, this map once again had the transparency adjusted to better depict the varying soil types: 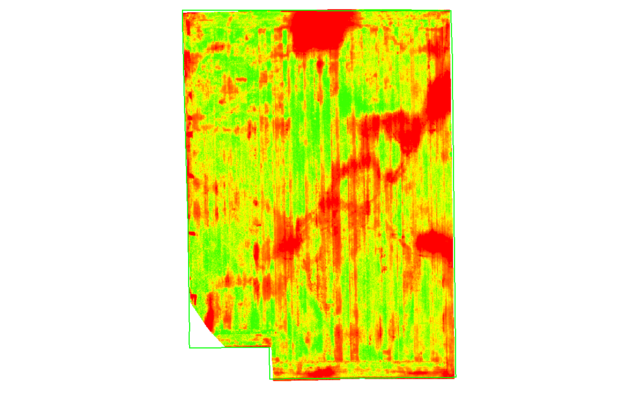 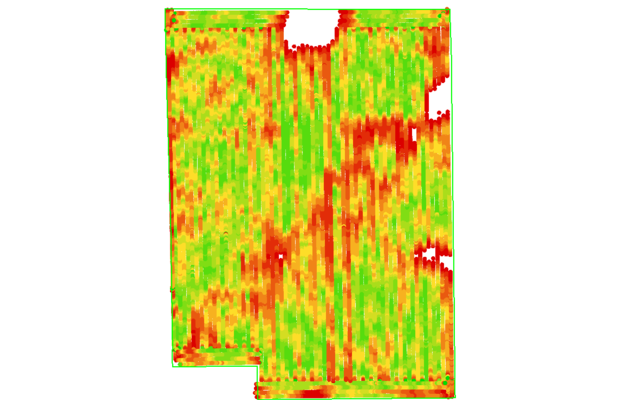 Erich’s client was aware of the water issues in his field. He had taken previous measures to try and alleviate this problem, such as placing drain tile every 40 feet. However, when he received the images Erich generated with Botlink’s software, he was amazed. The fact that a drone was able to capture this information from hundreds of feet in the air and turn it into meaningful data was “priceless” for him.

The client was able to immediately alter their crop management style. Based on the success of the flights — and the NDVI imagery matching the yield — Erich and his client plan to fly the field earlier. Drones allow them to be more proactive and reduce  the amount of nitrogen placed on specific areas in the field far sooner. Drones also allow Erich to fly the field again once the corn is roughly shoulder height to determine the last spray of nitrogen. Using NDVI maps, they can now identify green areas as higher yield areas and focus nitrogen spraying there, while spending less money and nitrogen into red areas identified on the map where the yield is already expected to be low. Drones are reducing the overspraying of nitrogen, ultimately saving Erich’s customer money.

At the end of the day, the process of scouting a field still takes time. But drones can deliver an 80-95% better success rate of finding issues in the field. They provide precision ag with an efficient, cost-effective manner of scouting. They have the potential to save agronomists and farmers time and valuable resources while also increasing yields.

To learn how Botlink drone software can help your business, begin your free trial or chat with one of our specialists. Download our free Botlink Capture mobile app for Android devices to start flying today!