With cash corn fetching a measly $2.85/bushel in our area early this winter, every percentage point of moisture that needs to be removed from the crop has a financial impact equivalent to a yield loss of about 1.75%.

Seed selection season is here again for corn farmers across the United States. Yield potential is often the key consideration in this process, whether through the selection of ‘racehorse’, ‘stable’ or ‘workhorse’ varieties, or the selection of specific genetic traits that will mitigate the headwinds the crop might face in any particular field.  With today’s depressed commodity prices, however, one additional consideration should be playing a prominent role in this decision process:  expected moisture at harvest time.

In eastern North Dakota, where I farm with my brother, the charge for drying corn at our local elevators is typically $0.05 per percentage point of moisture, per bushel.  With cash corn fetching a measly $2.85/bushel in our area early this winter, every percentage point of moisture that needs to be removed from the crop has a financial impact equivalent to a yield loss of about 1.75%.  Unfortunately for us, the approaching winter season typically forces corn to be harvested at moisture contents of 20% or more, making it frustratingly easy to give away 10% or more of the value of the crop just to get it dried down to market standards.  Given that the difference between the best- and worst-performing seed varieties in test plots is often in this same general range, the expected harvest moisture should clearly be a factor in next year’s seed selection process.

The good news is that accounting for crop moisture in seed selection may be getting easier. Over the past year, I have been involved in a great deal of research into the predictability of corn moisture content at substantial lead times before harvest. This research has largely relied upon the Farmers’ Independent Research of Seed Technologies (F.I.R.S.T.) test plot data, which was graciously shared with us in a bulk form that was conducive to large-scale data analysis. In the process of experimenting with models for predicting corn moisture content at harvest, an unexpected result emerged: errors in the predicted harvest moisture content were generally diminishing year by year over the time span of the dataset (2008-2016). Why would this be? 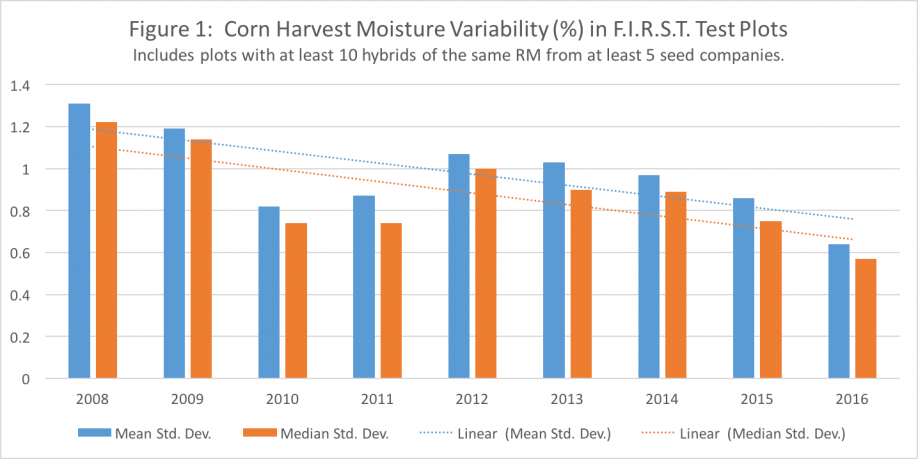 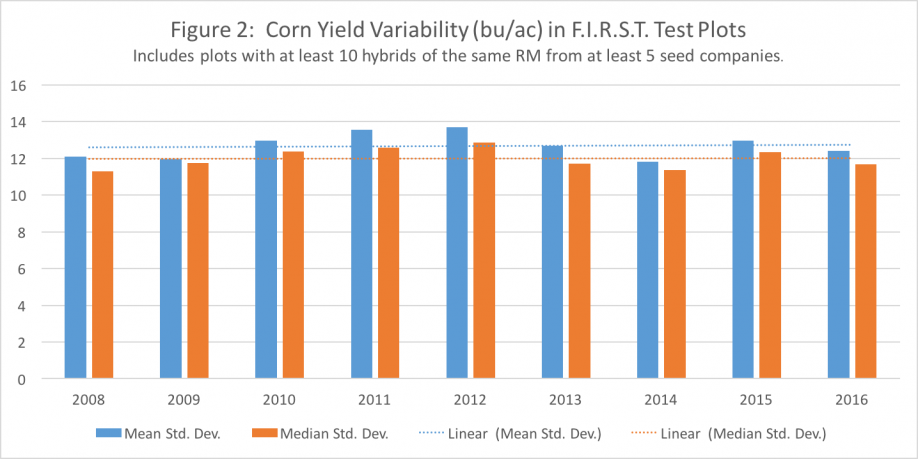 While experts within the seed industry might be able to offer more definitive explanations for this trend toward more uniformity in harvest moisture content, one possible contributor to this trend may be a Minnesota statute:

“For hybrid seed corn purposes a label must contain (…) the day classification as determined by the originator or owner. The day classification must approximate the number of days of growing season necessary from emergence of the corn plant above ground to relative maturity and must be within three days of maturity ratings determined in comparative trials by the Minnesota agricultural experiment station.”

The exact language of this statute has changed since it initially appeared many years ago, specifically tightening up the requirement that a labeled RM must be within three days of reality as determined by comparative trials. For reference, the industry’s most commonly used method for assigning RM ratings assumes a field drying rate of 0.5%/day, such that one percentage point of difference in harvest moisture content in comparative trials equates to two days of difference in the resulting RM rating.

While the impact of this statute relative to other possible factors that may be driving this trend is unknown, the significance of the underlying trend is still clear: now more than ever, you can count on different hybrids of the same RM rating exhibiting reasonably similar harvest moisture contents, regardless of the seed company or specific hybrid selected. You may want to keep this in mind if you’re thrown a seed sales pitch regarding a particular hybrid drying down much faster than a competitor of the same RM.

You may also benefit from doing your own comparison of the yield advantage of longer season hybrids vs. the additional drying costs that will typically come along with them. While the relationship between RM and yield varies both across the country, and as a function of where in the RM spectrum you generally land, a rough approximation of a 1% yield difference for each day of relative maturity change seems to be a ballpark approximation for much of the northwestern corn belt. So, if you aim to increase your yield by 2% by selecting a hybrid with a two-day longer RM, but then add 1% to your corn moisture content at harvest (and, recalling from above that this 1% moisture difference is roughly equivalent to a 1.75% yield loss at current corn prices and drying costs), are you really gaining anything? Maybe chasing higher yields by growing longer-season hybrids is counter-productive in the present price environment? It may pay to do the math for your own situation in order to find out.