The tool making these water measurements possible is a tiny graphene sensor that can be taped to plants – researchers have dubbed it a “plant tattoo sensor.”

Engineers make wearable sensors for plants, enabling measurements of water use in crops

AMES, Iowa – Iowa State University plant scientist Patrick Schnable quickly described how he measured the time it takes for two kinds of corn plants to move water from their roots, to their lower leaves and then to their upper leaves.

This was no technical, precise, poster talk. This was a researcher interested in working with new, low-cost, easily produced, graphene-based, sensors-on-tape that can be attached to plants and can provide new kinds of data to researchers and farmers.

“With a tool like this, we can begin to breed plants that are more efficient in using water,” he said. “That’s exciting. We couldn’t do this before. But, once we can measure something, we can begin to understand it.” 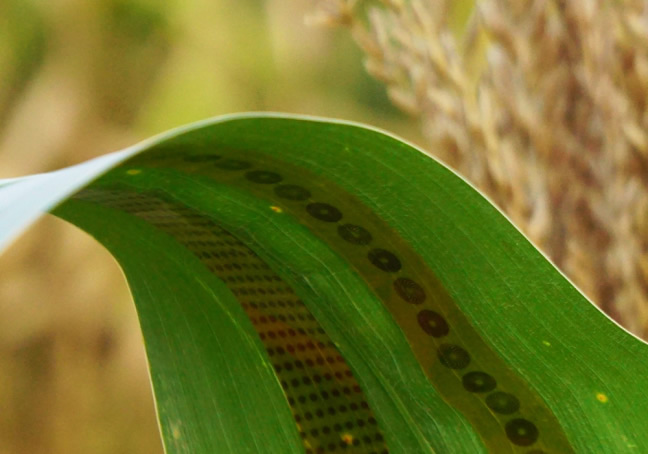 The tool making these water measurements possible is a tiny graphene sensor that can be taped to plants – researchers have dubbed it a “plant tattoo sensor.” Graphene is a wonder material. It’s a carbon honeycomb just an atom thick, it’s great at conducting electricity and heat, and it’s strong and stable. The graphene-on-tape technology in this study has also been used to produce wearable strain and pressure sensors, including sensors built into a “smart glove” that measures hand movements.

Researchers describe the various sensors and the “simple and versatile method for patterning and transferring graphene-based nanomaterials” to create the flexible sensors in a paper featured on the cover of the December 2017 issue of the journal Advanced Materials Technologies.

The research has been primarily supported by the Faculty Scholars Program of Iowa State’s Plant Sciences Institute.

Liang Dong, an Iowa State associate professor of electrical and computer engineering, is the lead author of the paper and developer of the technology. Seval Oren, a doctoral student in electrical and computer engineering, is a co-author who helped develop the sensor-fabrication technology. Co-authors who helped test applications of the sensors are Schnable, director of Iowa State’s Plant Sciences Institute, a Charles F. Curtiss Distinguished Professor in Agriculture and Life Sciences, the Iowa Corn Promotion Board Endowed Chair in Genetics and the Baker Scholar of Agricultural Entrepreneurship; and Halil Ceylan, a professor of civil, construction and environmental engineering.

To do that, the researchers have developed a process for fabricating intricate graphene patterns on tape. Dong said the first step is creating indented patterns on the surface of a polymer block, either with a molding process or with 3-D printing. Engineers apply a liquid graphene solution to the block, filling the indented patterns. They use tape to remove the excess graphene. Then they take another strip of tape to pull away the graphene patterns, creating a sensor on the tape.

The process can produce precise patterns as small as 5 millionths of a meter wide – just a twentieth of the diameter of the average human hair. Dong said making the patterns so small increases the sensitivity of the sensors.

(The process, for example, produced a detailed image of Iowa State’s Cyclone mascot that was less than 2 millimeters across. “I think this is probably the smallest Cyclone,” Dong said.)

“This fabrication process is very simple,” Dong said. “You just use tape to manufacture these sensors. The cost is just cents.”

In the case of plant studies, the sensors are made with graphene oxide, a material very sensitive to water vapor. The presence of water vapor changes the conductivity of the material, and that can be quantified to accurately measure transpiration (the release of water vapor) from a leaf.

The plant sensors have been successfully tested in lab and pilot field experiments, Dong said.

A new three-year, $472,363 grant from the U.S. Department of Agriculture’s Agriculture and Food Research Initiative will support more field testing of water transport in corn plants. Michael Castellano, an Iowa State associate professor of agronomy and William T. Frankenberger Professor in Soil Science, will lead the project. Co-investigators include Dong and Schnable.

The Iowa State University Research Foundation has applied for a patent on the sensor technology. The research foundation has also granted an option to commercialize the technology to EnGeniousAg – an Ames startup company co-founded by Dong, Schnable, Castellano and James Schnable, an assistant professor of agronomy and horticulture at the University of Nebraska-Lincoln, a collaborator on another Iowa State sensor project that sparked establishment of the company (and Patrick Schnable’s son).

“The most exciting application of the tape-based sensors we’ve tested so far is the plant sensor,” Dong said. “The concept of wearable electronic sensors for plants is brand new. And the plant sensors are so tiny they can detect transpiration from plants, but they won’t affect plant growth or crop production.”

But that’s not all the sensors can do. The technology could “open a new route” for a wide variety of applications, the authors wrote in their paper, including sensors for biomedical diagnostics, for checking the structural integrity of buildings, for monitoring the environment and, after appropriate modifications, for testing crops for diseases or pesticides.