This robust network continuously monitors the water pressure through the pipes that connect to the clusters that then feed each pivot. Monitoring is done via pressure transducers to the clusters. 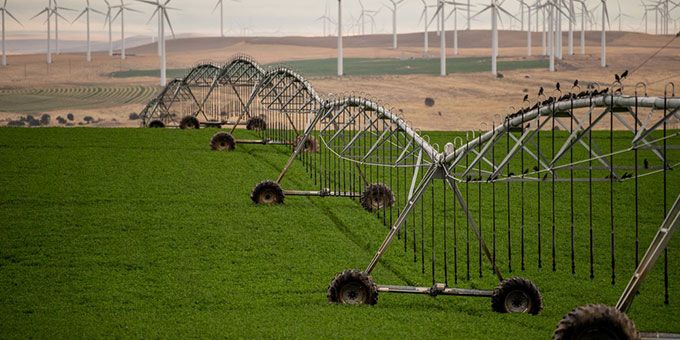 To meet the growing population and increased demand for food, farmers and agricultural companies are turning to the Internet of Things (IoT) for analytics and greater production capabilities. Technological innovation in farming is nothing new. Handheld tools were the standards hundreds of years ago, and then the Industrial Revolution brought about the cotton gin. The 1800s ushered in grain elevators, chemical fertilizers, and the first gas-powered tractor. Fast forward to the late 1900s, when farmers started using satellites to plan their work.1 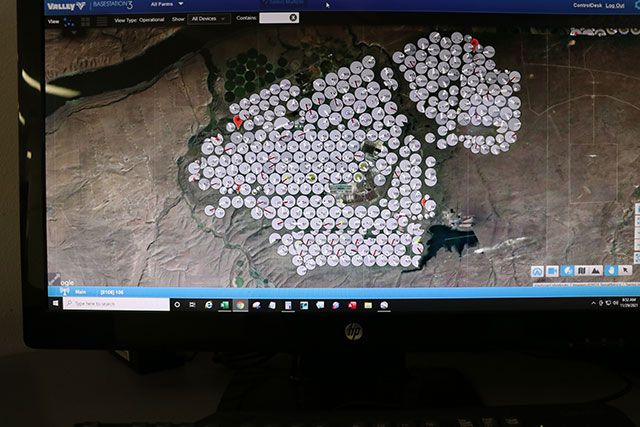 The IoT is set to push the future of farming to the next level. Smart agriculture is already more commonplace among farmers, and high-tech farms are quickly becoming the standard thanks to agricultural drones, sensors, Supervisory Control and Data Acquisition (SCADA) and remote alarm notification systems.

Located in Oregon’s Columbia Basin, Threemile Canyon Farms, LLC., (Threemile) was founded in 1998 with a vision to create a modern agriculture operation at the intersection of productivity and sustainability. Threemile has built its farming operations on a “closed-loop” system of sustainable agriculture that recycles organic waste by putting it back to use in the soil, resulting in little to no waste – while increasing cost savings.

Growing more than a dozen different fruits and vegetables that are cultivated in 385 crop circles that average up to 120 acres each is no small task. The crops are on different irrigation and fertilization regimens and the organic crops require an even more specialized program. This forward-thinking farm, which encompasses approximately 140-square miles and over 30,000 acres of irrigated farmland, exemplifies high-tech farming.

Center pivot irrigation, which is 10 to 20 percent more efficient than furrow irrigation, is how each circle is watered and fertilized. The irrigation pipes are supported by trusses mounted on wheeled towers that make a circuit of the field under their own power. Gun-style sprinklers spray water or fertilizer out from the pipes at set intervals, with smaller nozzles closest to the pivot and the largest nozzles at the end of the line.

Typically, a main pipeline connects to a cluster – where two to four pivots are fed – with a tank head. The pivot pipes leave this location and go out to the center pivot. These clusters contain all electrical, control wires, water valves, and cluster pressures. This central spot is where the pivot control panels are located along with network communications equipment.

The water, fertilizer, chemical, speed, direction, duration and variable rate can all be controlled – including different combinations, such as operating at a 50-degree angle at 100 percent capacity then slowing down to 20 percent and then speeding up again – and programmed into the panels to keep the crops in optimal conditions. Additionally, there is GPS on the end tower so the team knows exactly where a pivot is directed on the crop circle at any given time. Threemile’s efficient irrigation techniques and management systems increase the cost-effectiveness of crop production, reduce soil erosion, and lessen energy requirements – including helping to lower their annual energy bill – while enhancing and sustaining crop production, the environment and water use efficiency. This entire process makes Threemile more efficient, allowing them to increase crop production and yield and save money.

Mark Ashby, Threemile’s IT and automation systems manager, oversees the farm’s [IT] control systems and complex network that ensure the crops, and irrigation and fertilizer systems are continuously monitored. This helps guarantee healthy crops and high yields.

This sophisticated technology has been a work in progress for more than a decade. Ashby and his team began by implementing a large wireless network as the foundation for a better, more reliable system that allows them to control the crops’ maintenance to the smallest detail. With the goal of improving reliability and control even further, the pump stations were retrofit with upgraded programable logic controllers (PLCs) and fitted with medium-voltage variable frequency drives to control the motor/pump speeds to anything between zero and 100 percent. Over the years, the technology continued to increase and now includes over 200 PLCs, a 140-square mile wireless umbrella, 25 communication towers, a variety of fiber-optic/cat5/cat6 network connections, and Gigabit air fiber seamlessly connects all the systems.

The architecture of network servers run AVEVA System Platform SCADA integrated with remote alarm notification software. They not only continuously monitor the conditions on the farm, but report back and collect valuable data upon any change within the system. This information is stored in Historian databases for mining and provide analytics for continuous review and opportunities to make the operation more efficient.

This robust network continuously monitors the water pressure through the pipes that connect to the clusters that then feed each pivot. Monitoring is done via pressure transducers to the clusters. In addition to the pressure and flow being monitored, the team watches many other system components. For example, at the river stations, the water that is pumped out of the Columbia River uses 1,500HP and 1,250HP pumps, and high-pressure shutdown techniques for the river and booster stations also require monitoring.

With peak volumes during summer months of up to 200,000 gallons of water per minute being pumped, any aberration from normal levels can lead to devastating consequences including costly machine repairs and damaged crops.

“It’s imperative that I know when there is a high-pressure shut down, when a motor faults, equipment doesn’t start or if pressure is too high or too low. These are the circumstances in which we depend on WIN-911 alarm notification,” commented Ashby.

When things do not operate as they should, the software sends out alarm notifications via an SMS text message or through emails that allow Ashby and his team to intervene and rectify the situation.

“I can’t only depend on someone sitting at the control desk to notice everything. For example, it’s a lot easier to pull a pump/motor when we’re alerted to a possible problem than down the road when it burns up; particularly when a rebuilt motor costs up to $50,000,” added Ashby.

In addition to forecasting potential problems, since everything is interconnected, it’s critical to get an alarm when something isn’t working. If even one of the 72” pipes coming from the river station shuts down, multiple pumps - that are pumping between 10,000 – 15,000 gallons of water per minute – will stop, leaving the crops vulnerable and causing safety issues. Having the ability to go back and compare past data to see why an event like this happened, helps them prevent future problems. Threemile has a significant investment in pumps and motors – upwards of $200,000 each set. Ensuring that they’re running correctly is critical to the farm’s operation and bottom line.

“The software notification we use is reliable and gives me a depth of response. I get information immediately and know when there are any issues,” said Ashby.