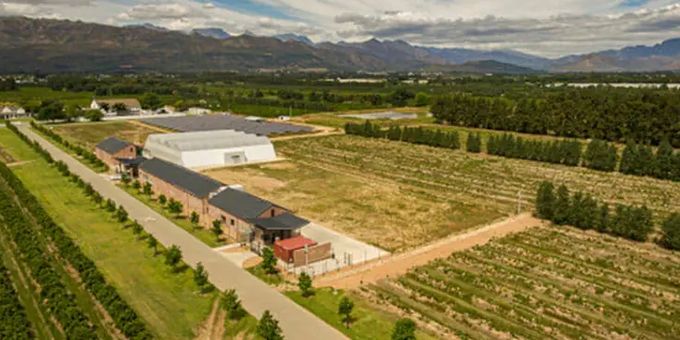 Located in the Western Cape Province of South Africa, Paarl rests in a beautiful valley surrounded by hills whose bluffs rise abruptly from the flat countryside in stark but splendid contrast. Paarl remains one of the oldest farming towns in the region with a rich history of vineyards, citrus orchards, and blueberry fields, but a new crop is transforming the land and region–medical cannabis. The Van der Merwe family, through their holding company Boplaas 1743, has been farming commercially in South Africa for nearly three-hundred years with a concentration on apples, pears, and citrus.

This changed in 2019 when an entrepreneur from Johannesburg, James Simpson, approached the Van der Merwe family with his vision for producing world-class, medical-grade cannabis on the African continent. Thus, at the beginning of 2020, the new partners broke ground overlooked by Carl Van Der Merwe and James Simpson for the new ChroniCo medical cannabis facility. Soon after work was completed in 2021, ChroniCo was granted a license to grow and process cannabis flowers by SAHPRA (South African Health Products Regulatory Authority).

Cannabis is well-known to be a resource-intensive crop. From lighting to water to HVAC to soil, there are numerous factors that affect production, morphology, costs, and waste. Therefore, the Van der Merwes spared no expense and cut no corners when constructing their state-of-the-art facility to optimize resource efficiency.

James and Carl explain that “one of the guiding principles was to always be working toward carbon neutrality and to minimize both wastage and pollution.” For this reason, the farm is powered by both land-based solar panels and a floating array. To conserve precious water, a complex system of pipes and drains was installed underneath the facility. He continues, “Before being redistributed on the farm, the water undergoes extensive treatment through both ultrafiltration as well as reverse osmosis.”

Fluence LEDs were installed in the Paarl facility as one of ChroniCo’s high-efficiency technologies. LED lighting systems have become increasingly popular in both small and large grow rooms for their electrical and thermal efficiencies, their ability to provide mechanical and spectral control, and their flexibility in multi-tier vertical farming. This flexibility is demonstrated by the fact that “Fluence LED lighting is used to supplement the plants’ needs when light levels are lower due to environmental factors.”

James and Carl explain further that “insulated sandwich panels have been used for the walls which helps stabilize temperatures and exclude light in the greenhouse while the translucent roof means that sunlight powers the plants’ growth and boosts photosynthesis resulting in healthier, happier plants while also cutting down on electricity usage.”

Genetics play a major role in the cultivation of world-class cannabis. Because the Cannabis industry in South Africa remains relatively new, the procurement of correct, licensed genetics is not an easy task. It was only after a thorough investigation that ChroniCo managed to source clones and seeds from several reputable suppliers. “By putting numerous strains in the tunnel, our growers can see exactly how the tunnel behaves on its first round and assists with the dialing in process,” James says. “It also allows the growers to see how different varietals respond to the microclimate in the greenhouse as well as how they respond to the local weather conditions. This helps ensure proper selection for future harvests and will allow us to optimize growth and production over the coming years.”

By implementing best practices in facility design, genetics, pest control, and LED lighting with Fluence, the Van der Merwe family and its experienced ChroniCo team are poised to transform the cannabis industry in South Africa and beyond for at least three hundred more bountiful years.

About Fluence by OSRAM
Fluence Bioengineering, Inc., a wholly-owned subsidiary of OSRAM, creates powerful and energy-efficient LED lighting solutions for commercial crop production and research applications. Fluence is a leading LED lighting supplier in the global cannabis market and is committed to enabling more efficient crop production with the world’s top vertical farms and greenhouse produce growers. Fluence global headquarters are based in Austin, Texas, with its EMEA headquarters in Rotterdam, Netherlands.