This case study will analyze how the use of Intelinair’s AGMRI Decision Support Platform led a central Illinois group of growers to increase their fungicide purchases by over 20% in one season. 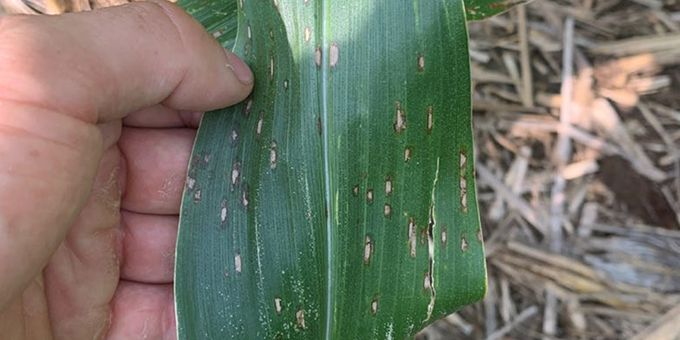 It has often been said that “there are only three certainties in life: death, taxes, and crop disease”. While that was a blatant misquote of Benjamin Franklin, the sentiment remains: crop diseases are a near certainty in any agricultural endeavor. According to the Crop Protection Network, diseases destroyed a staggering 10.6% of all soybean yields and 10.9% of all corn yields across the United States and Ontario in 2018. While that was a particularly bad year, above the 5-8% average, the toll disease takes on agriculture is routinely massive.

Fungicide is first and foremost a preventative measure, rather than a curative one. Because there is a relatively small window where it can be applied effectively, many farmers buy less than they need simply because they have no way of knowing when they will need it. This case study will analyze how the use of Intelinair’s AGMRI Decision Support Platform led a central Illinois group of growers to increase their fungicide purchases by over 20% in one season. It did this by clearly demonstrating the power of fungicide, providing disease-detection insights that maximized its efficacy, and building trust between growers and retailers with this information.

Let’s set the stage. A salesperson for an Illinois ag retailer, let’s call him Greg, is trying to sell fungicide to a community of growers working challenging farmland. In this place, every dollar counts and every decision carries tremendous weight for the outcome of the season. The farmers here are, by necessity, veterans of the agricultural world, their skills refined by decades of work in the field. Naturally, they had tried fungicide before, but had by and large come to the conclusion that it did not work for them.

Now, to clarify, they did not deny that fungicide was an effective disease deterrent. Their issue was that they did not believe it was worth the cost. Since fungicide is primarily a preventative measure, rather than a curative one, to get the best results one must apply it before any disease can take root. Such an application can cost up to $30 an acre, so spraying down hundreds of acres is no inexpensive endeavor. 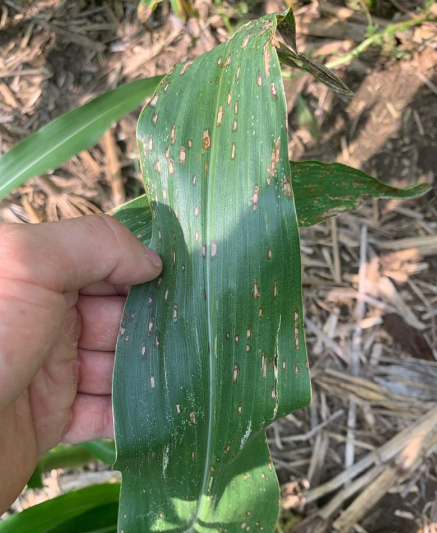 Grey Leaf Spot of Corn is responsible for significant losses each year.

Because of the difficult conditions of the soil, their yields were already volatile, and throwing another cost into the mix with no hard proof of sufficient payoff was not a financially sound thing to do. And they certainly were not going to guess where disease might appear and apply only there, potentially spending money with no return. Having worked like this for decades, Greg faced an uphill battle trying to sell them a product they did not think would help. However, this all changed when AGMRI entered the picture.

Several of the farmers in this area had been working with Intelinair’s AGMRI platform to improve their yields in this difficult climate. While they had only been with the company for a single season, they already saw the potential its insights provided. Matt, the AGMRI representative in the area, had discovered that these grower’s crops were suffering from disease, and thought it would be in the best interest of the farmers to begin applying regular fungicides.

He partnered with Greg to devise a plan to address the grower’s concerns about fungicide’s rate of return so that they would trust the retailer enough to reap its benefits. The plan had two stages: first, demonstrate the reliability of the AGMRI platform with a test field, then show how AGMRI can remove the uncertainties that had previously compromised the farmer’s use of fungicides.

The farmers agreed to allow one of their smaller fields to be used as a testing ground for this first experiment. Crops were planted and then sprayed with fungicide in alternating test strips, then monitored with AGMRI to see how they would fare. As expected, when disease crept in later in the season, the sprayed strips flourished and the unsprayed strips suffered. However, AGMRI did not just show the results of disease—it was able to predict it. By comparing thermal imagery to plant health analytics, AGMRI could identify plants under stress from disease almost a week before symptoms would be visible to the human eye. Like us, plants raise their internal temperatures when under disease stress, and AGMRI’s AI was able to detect this and send out alerts that told the farmers exactly where to expect an outbreak. 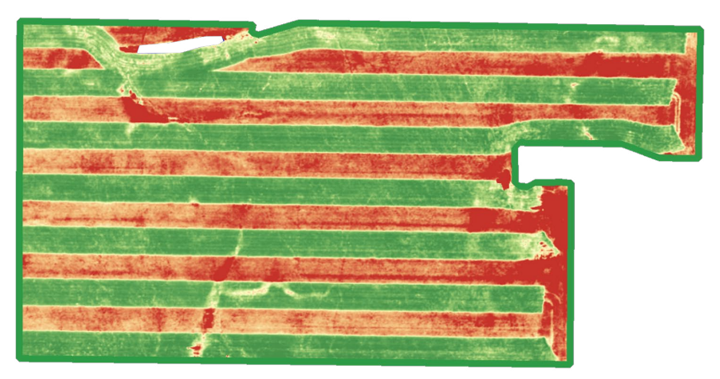 NDVI imagery of the test field, showing how disease ruined plant health in the untreated areas.

How was AGMRI able to do this? AGMRI uses machine learning, computer vision, and high-resolution imagery to construct a “digital twin” of any field under its purview. This digital twin is an exact copy of the field in digital space, including information such as soil composition, field topography, and color, thermal, and infrared images taken by plane, drone, and satellite. All together, this provides an uninterrupted view of every acre from planting to harvest.

This is all processed by a series of powerful machine learning algorithms that produce multiple vegetative health indices, and are capable of detecting everything from emergence to disease to weeds. All of these issues can be immediately viewed and acted upon via alerts and visualizations that appear right on the user’s smartphone. AGMRI can even wirelessly export custom prescriptions to machinery in the field, connecting these big-picture insights to the day-to-day work on the farm. 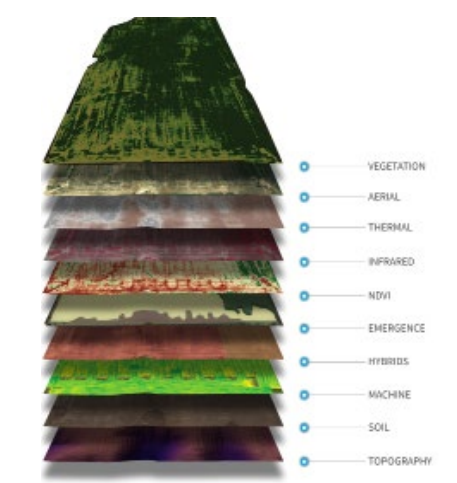 AGMRI’s “Digital Twin” analyzes all aspects of a field from the ground up.

Because of this practical display, the farmers gained trust in both AGMRI and Greg’s product. They were not merely told about the potential benefits of fungicide—they were shown hard data that proved its worth. But more importantly, their real concern was addressed. How can they account for the unstable conditions of their region? AGMRI can do it for them, removing their uncertainty and fear of wasting money.

Almost all of the growers purchased fungicide in the following season. Some even switched all their agricultural purchases over from their previous retailer to Greg’s because he took the time to work with them on this project. But the benefits to the farmers are only just beginning. Now that it is off a test field and operating on a large scale, AGMRI’s analytical power can truly stretch its legs. Thus began the next part of the plan.

In the next season, AGMRI’s thermal analytics detected an abnormally hot area in an otherwise healthy-looking field, and flagged it as a potential disease risk. The farmer decided to scout the area. In it, he found several leaves with early signs of tar spot, a deadly corn disease that can destroy 50-100 bu/ac within a week if left unchecked. Thankfully, these disease signs were extremely minor— so minor in fact, that they very likely would have been missed had the farmer not used AGMRI to identify the stress. The farmer ordered a fungicide application immediately. The tar spots spread no further, saving thousands of bushels over dozens of acres.

Without this early warning, the farmer would have missed this opportunity, costing him possibly thousands in lost yield. But not only the farmer benefits from warnings like this. The retailer gains extra sales throughout the season, as their product can now be used in almost every situation that requires it. Without AGMRI’s insights, many farmers will likely only apply fungicide around rain storms or other environmental threats to their crops. Now, farmers can apply it when disease creeps in without any visible external trigger, which means more sales for the retailer. But perhaps the most important benefit AGMRI gives to the retailer-grower relationship is trust. 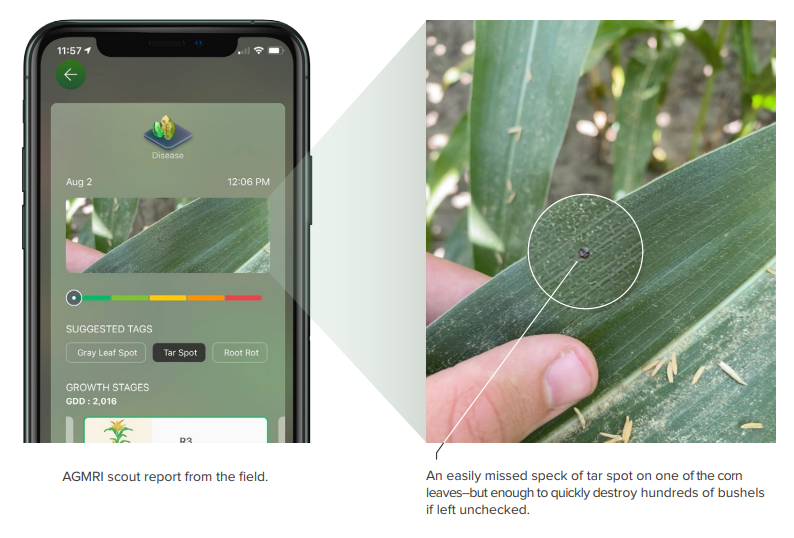 No matter how effective or revolutionary a product is, it can go nowhere without the trust of the customer. Greg saw this first hand when he initially tried to sell his fungicide—while it was without a doubt nothing but a benefit to the farmers, they did not trust it. To them, any attempt to sell them fungicide looked like an attempt to make money off of their plight without any care for the actual effects of the product. AGMRI’s insights removed the uncertainty from that situation and provided clear information on just how effective Greg’s product was, building trust between them. The farmers will continue to return to him because of this, and will trust him when he offers to sell them more product because of a potential disease outbreak, as mentioned previously.

In this situation, everyone wins. The farmers gain access to a powerful disease prevention method and the insights to use it at its maximum efficacy, as well as the confidence that every dollar they put into it has a visible impact on the health of their fields. The retailer gains increased opportunities to make sales because of AGMRI’s disease-detection insights, which no human scout could have picked up on. If you are struggling with disease in your own fields, or trying to sell more of a product to combat them, AGMRI can help you achieve optimum yields and sales through the power of information.

About Intelinair
Intelinair is spearheading the digital Ag revolution through AI, focusing on improving in-season crop performance and providing off-season logistical insights through our innovative digital twin technology and AGMRI machine learning platform. We are committed to boosting efficiency, driving higher yields, and increasing productivity all while maintaining sustainable farming practices in the ever-changing world of Ag tech. You can find out more about our mission and how we can help you get the most out of your fields at www.intelinair.com or by calling 1-833-692-4674.