New Smart Farm technologies can give America's growers the ability to monitor crop conditions in real time, respond to technical problems before machinery breaks down in the field and consult with the world's foremost agronomic experts with the push of a button. 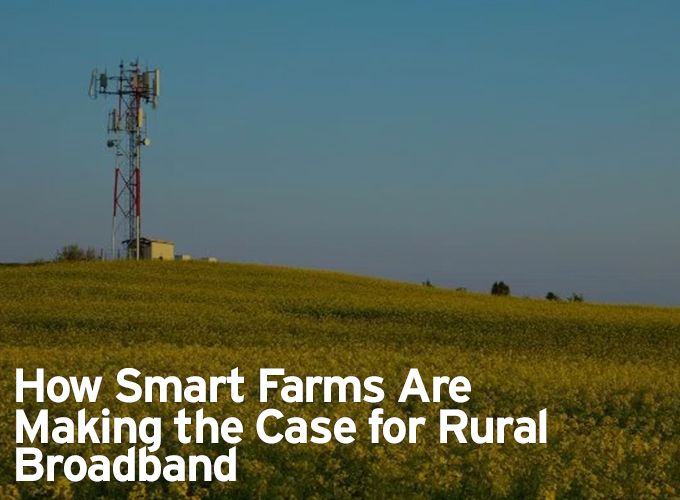 Contributed By | Association of Equipment Manufacturers

That is, as long as they've got five bars of service and plenty of internet bandwidth. If not, the smartest piece of technology isn't worth its weight in good, quality fertilizer.

And, according to Eric Lescourret, the Director of Strategic Marketing at AGCO Corporation, that dearth of rural bandwidth is the bottleneck that's standing between American farmers and the next great breakthrough in agricultural productivity.

"That's the dilemma, that our farmers out there are collecting more data for every seed they plant than they can process," Lescourret says. "All of them are located in rural areas, and the broadband infrastructure is not keeping up."

Lescourret illustrated the true magnitude of the problem at the Association of Equipment Manufacturers' (AEM) Tomorrow's Topics Today booth during the International Construction & Utility Equipment Exposition (ICUEE) earlier this month. Even with the limited adoption of Smart Farm technology that is already underway, he says that American farmers are capturing one kilobyte of data per year for every seed that is planted.

That may not seem like much at first. But when you consider that a typical corn field has about 32,000 plants, that means that every corn field is producing about 32 megabytes of data annually—or about as much bandwidth as it will take you to stream the first four singles off Taylor Swift's new album.

But with 450 million acres of corn in the United States, that means that farmers are already producing 14.4 million gigabytes of data related to their corn crops annually—nearly 10 times as much bandwidth as has been used to stream Taylor Swift's latest single 205 million times this year on Spotify.

On, perhaps, a more comprehensible scale, that much bandwidth would allow you to download the entire Library of Congress more than 50 times—just in the data captured from one year's U.S. corn crop. And Lescourret says those numbers are only going to grow as companies introduce new and more powerful Smart Farm technologies, like a new combine from AGCO that features more than 60 sensors which capture data in every second of operation.

"In managing the amount of data we have to get through from our sensors, all the way to a hub, back to an agronomist, and back and forth to our machine, it takes a lot of infrastructure to do that," Lescourret says.

Nationwide, cities that feature reliable, high-volume broadband service have proven themselves a draw for corporations seeking sites for new, advanced manufacturing facilities. But even as many farms increasingly resemble manufacturing operations, Lescourret says their decentralized, rural nature and the resulting poor access to broadband jeopardize the productivity gains they stand to reap.

According to a 2016 report by the Federal Communications Commission, 39 percent of rural Americans lacked access to high speed broadband internet access (25 Mbps/3 Mbps), compared to just four percent of Americans in urban areas.

"There are a lot of areas that are very slow," Lescourret says of AGCO's use of Smart Farm technologies in rural areas. "We still have to rely on USB sticks to transfer data, and the reason is we don't have cellular data coverage. If we don't have it, we can't transfer the data accurately."

And in a business like farming where hours and minutes can be the difference between success and failure, Lescourrett says having to hand deliver data from the farm site to agronomy experts could do more than endanger the source of America's food crops—it risks the nation's strategic geopolitical standing with its trade partners and competitors.

"The Chinese, right now they need to import from us," Lescourret says. "But it's only a matter of time until they can grow their own crops and they become as productive as we are. So to me, (broadband infrastructure) is no less important than the defense industry, and it's something we need to invest in."

"Who's going to invest the money, that's the question. And farmers will tell you they have no money to give right now. They can barely break even, so where are we going to find the funding?"

Ultimately, Lescourret sees growing pressure from utility groups, manufacturers and the agriculture community to leverage a federal investment in rural broadband. But until that happens, he says American farmers will be hamstrung in efforts to make productivity gains through the use of new and emerging technologies and meet the demands of a growing society.

"Every cent per acre that you can save, that you can reduce in input or increase in yield, you have to do it with this technology," Lescourret says. "But you have to have the broadband infrastructure."